Ferrari's Vettel scores the third podium in a row 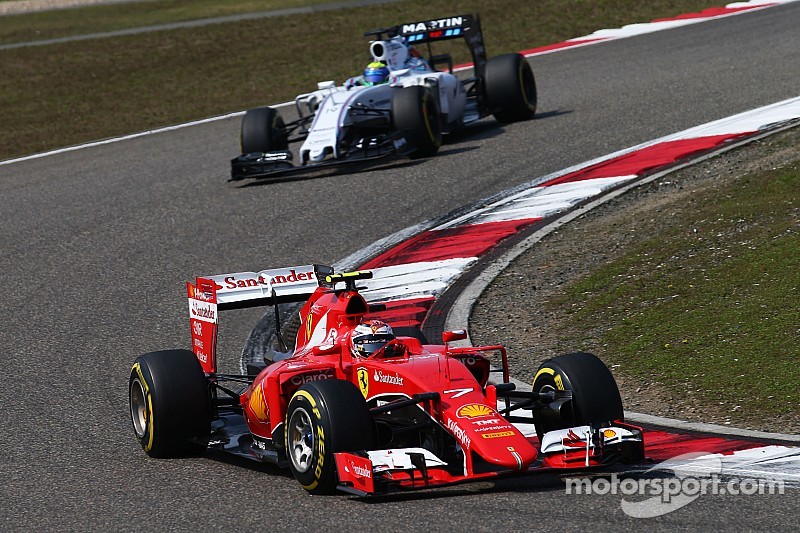 Kimi Raikkonen gains two places at the start, from sixth to fourth.

Shanghai – Come the end of the third round of the Formula One World Championship, Scuderia Ferrari saw its drivers finish in third and fourth places. Sebastian Vettel made it to the bottom step of the podium and, having started sixth, Kimi Raikkonen came home fourth, thanks mainly to an excellent start. Both drivers set off on new Soft tyres and ran a two-stop strategy. Lewis Hamilton won ahead of his Mercedes team-mate, Nico Rosberg.

Maurizio Arrivabene: “Today we ended up where we were supposed to be, so we can say we achieved our target. I never promised we’d be making miracles to anyone. Our strategy was to get as close as possible to Mercedes, getting ready to take advantage of any mistake from them. It was no surprise to see that they were strong. Temperatures were different from Friday’s long runs, and this affected the behavior of the tyres.

I am very happy for Kimi and, above all, I’m happy for Seb’s third podium finish in a row. The boys in the garage did a splendid job, today it was easier to get things wrong than to make the right thing. I don’t have the crystal ball and I can’t tell what our competitors will do in the next races. But I do know that we’ll try our best”.

Kimi Raikkonen: “Considering that my position on the starting grid today was not ideal, fourth place is a good result. My start was ok, I had quite a good jump off the line, and at the first corner I decided to go inside and at the end of the corner I was in the right place and managed to take the Williams under braking – my car is really good at that – and managed to pass them.

The car was quite good today; the first set of tyres was a bit tricky, but I think it was the same for everybody, and then the next two sets were ok. Towards the end of the race I was catching up, I knew I had the speed and I thought I still had good tyres.

I could still have had a chance to try and fight for podium but the safety car came in and we know we cannot change that. Today we got close to the podium, from the next race on we have to have a better weekend, doing everything right in qualifying, and we’ll do our best. As a team we scored the maximum today, we know we are behind Mercedes, but we have to be happy with the result. From tomorrow on we have to make another step to be able to challenge them every weekend; we’ll keep working hard as we have done since last year. We trust the way the team is working: now we have to be patient”.

Sebastian Vettel: “All in all we can be really happy. It is only race three and the steps we have made so far are really impressive. Third and fourth place for the Team, makes me really happy, I would have obviously loved to put more pressure on Mercedes: after the first and second stop we were able to be right there, but in the last stint they were able to pull away quite a lot. Basically we are closer than four weeks ago, which is positive, but there is still a lot to do.

But what’s very positive is also the fact that we stayed ahead of all the other Teams. Second for us was not really possible today, you have to accept that our opponents were quick. For Bahrain, we hope to get again a bit closer. We have a strong car no matter which condition, that is the feeling”.

Why Nico Rosberg is fighting a losing battle