Pedro de la Rosa will drive the 'red' car for the first Formula One testing this year. In his own words, the Spaniard told his tale of how he will be behind the wheel of the Ferrari in Jerez.

Jan.29 (GMM) Ferrari turned down Pedro de la Rosa when the Spaniard was first on the market as a test driver.

The 41-year-old is now regarded as arguably F1's very best test driver, who has been signed by Ferrari for 2013 and will drive the team's 2013 car at Jerez next week.

But he recalled: "When I left Jaguar, in January 2003, I called Ferrari to offer my services as a test driver and reserve.

"Jean Todt said, 'We have Felipe Massa and Luca Badoer, so we're covered', and hung up. 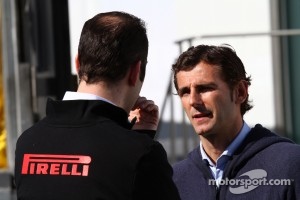 "Then I called McLaren, Martin Whitmarsh, and he said they were covered with Alex Wurz. But I told them that Ferrari has two testers, and so he told me that if I was in England, to come and see him.

"Two weeks later, I got on a plane and met with them. The interview was really bad, but they signed me.

"If I had not been quick to say that the competition had two testers, I would probably not be here today," he smiled.

He continued: "I don't know if everyone is happy or not, but the important thing is to look to the future.

"Certainly there were other teams, but probably they were not quick enough or they knew what I wanted. For me it was very important to do something different.

"It is a massive challenge, but I'm where I want to be.

"One of the first people I called was Martin Whitmarsh; obviously he was very surprised by the decision, but he congratulated me."

I am very happy to be able to test the car.

Now, he is looking forward to his debut in a red car, next week at Jerez.

"I am very happy to be able to test the car, I didn't expect that."

De la Rosa also said he will be "ready" in case Ferrari call him up to race, as a reserve driver at every Grand Prix.

"I'll be at the race and prepared for what might happen. But whether or not I am reserve driver is a team decision.

"But if I have been ready my whole career, how could I not be ready now?" he added rhetorically.

Lotus drivers Grosjean and Raikkonen: The look of love

Lotus thinks most teams will keep 'step' nose in 2013