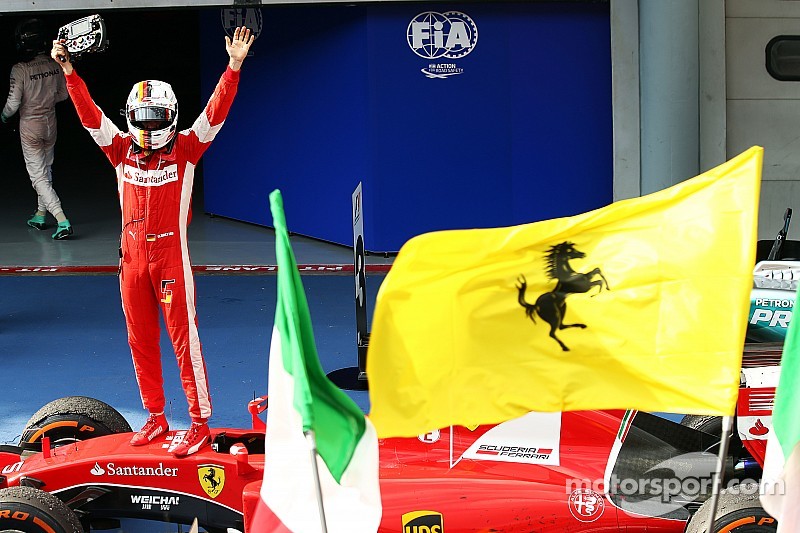 For Scuderia Ferrari, today's win is the 222nd, the first since the 2013 Spanish GP, while Sebastian Vettel is now on 40 wins.

Sepang –Sebastian Vettel won the Malaysian Grand Prix for Ferrari at the wheel of his SF-15T. Having started from second on the grid, the German managed to finish ahead of the Mercedes duo of Lewis Hamilton and Nico Rosberg. His team-mate Kimi Raikkonen finished fourth, after having to make an unscheduled pit stop on lap 2, because of a puncture. He then fought his way back up the order to finish just off the podium. The Formula 1 circus will be back in action after a two week break, at the Shanghai circuit in China.

Maurizio Arrivabene: “This is no one-man win: it’s a success for the whole team, which has been working impeccably at all levels. Seb was just unbelievable today, and Kimi was able to put on a fantastic charge from the back. The whole team has showed a great deal of discipline, just like a Swiss watch-or should I say, an Italian one! Today, the whole team gave me great emotions and I wish to thank everybody, including the women and men back at the Maranello factory, for putting on an incredible effort over the last months, burning the midnight oil.

Now we’ve got to be realistic, keep our feet on the ground and our concentration at a high level, because Mercedes is still a formidable contender. After the race our President Mr. Marchionne congratulated the whole team. He’s really one of us, he likes to stay away from the spotlight but still gives us a powerful contribution. And he’s a real Ferrari fan!”.

Kimi Raikkonen: “We had a pretty poor weekend in terms of things going wrong. I had a good speed but in qualify it didn’t go well and then today, after a poor start where I had too much wheelspin right off the line, I found myself fighting with all the other drivers and I had a puncture on the rear left tyre while battling Nasr at the last corner, which means I had to go one full lap before coming back to pits with no tyre. At that point my floor had got a little bit damaged, I had to do a full lap with no tyre and then, even if the safety car helped us, I had to start from way back behind.

We did our best and the forth position was the maximum we could achieve. The win of Sebastian is a very good thing for him and for the whole team , knowing how difficult the last year has been; it’s a very good job what the team has done. We knew from winter testing that we have a good car, so it did not come as a total surprise, and probably the track with these high temperatures suited us. I don’t know how it will be in other circuits, but the car has been strong so far, not yet as we want but we have a good package, and we are getting stronger”.

Sebastian Vettel: “Grande gara, bella macchina! (A great race and a beautiful car). Sorry for starting to speak in Italian, but today is such a special day for me. I don’t really know what to say, I am speechless. It’s not only one childhood dream that becomes true, it seems to be many dreams together. It was amazing to look down from the podium and see the mechanics, the engineers, the whole team and listen to the German and Italian anthems. The atmosphere in the team has always been great, but it’s just getting better and better.

For today, the important thing is for all of us to enjoy this moment together and celebrate. I did not swap teams that much in the past, so winning for a new team is always a relief. Since I joined Ferrari I felt incredibly welcome and together we have worked to improve things. The potential, as I always said, is huge, it’s good to see what a step forward we did over the winter. There were a lot of changes in the background (including one driver…) which never make things easy, but everyone saw the positives of that. It just doesn’t compare to last year, when the car was also good but I couldn’t get on top of it.

With Ferrari I had a good feeling right from the start. This is a special day, it has been a while since both I and team won for the last time. I’d like to be in the same position at every race, but we must be realistic, Mercedes were a bit struggling today but they have a great package and our target is to make the gap smaller at every Grand Prix and make sure that we are the team right behind them”.