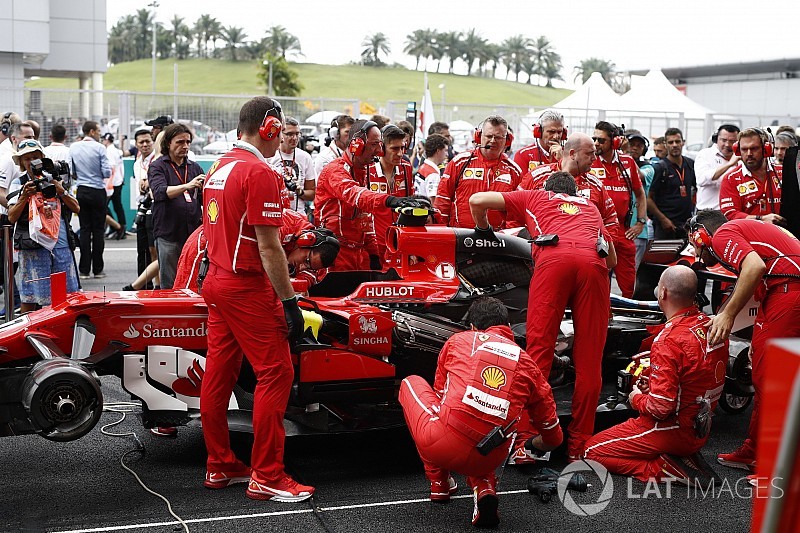 An "angry" Sergio Marchionne says changes are being made to the Formula 1 team to combat the "ugly" reliability problems that marred its Malaysian Grand Prix.

Sebastian Vettel had to start last at Sepang after engine problems affected his Saturday, while Kimi Raikkonen was unable to take up his second place on the grid due to similar issues.

Ferrari identified the failure of a component relating to the engine's air intake system as the problem on both cars.

Ferrari president Marchionne said that was the consequence of a "young team" in the engine department, and that action was being taken.

"Yesterday both Ferraris could have won the race," he said at an event in Rovereto in Italy on Monday. "That's a fact. It could have also been the same at Singapore, that's another fact.

"It's also a fact that we've got some issues with our power units because we have a young team, but also because the quality of the components is not at the right level for a race car.

"We are intervening and we are working on it. It's almost fortunate we haven't had that problem until the Malaysian GP.

"Now we're working on the quality department and making some organisational changes. Having this kind of problem during the race make us angry.

"That's not a big problem if this kind of issue appears in our factory, but it's really ugly when you're in second place on the grid and you can't start the race."

Vettel was able to recover to fourth place in the race, but with Lewis Hamilton finishing second the gap between them in the world championship is up to 34 points.

Insight: "My most difficult time" - Why is Valtteri Bottas struggling in F1 at the moment?