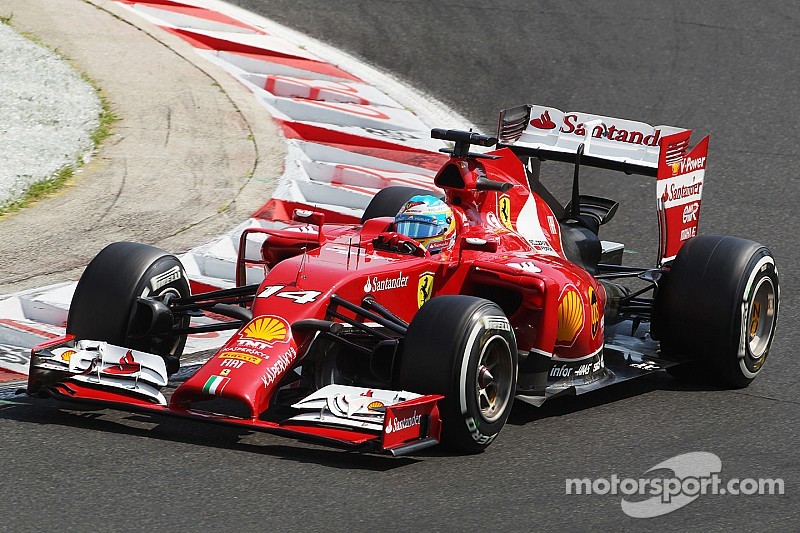 Kimi Raikkonen: “I am very disappointed with the outcome of qualifying, especially because this weekend I was going well and had a good feeling from the car."

Budapest – For the fourth time this season, Fernando Alonso qualified fifth this afternoon to secure a place on the clean side of Row 3. It’s a good place to be to pick up points in the final race before the summer break. Possibly making life easier for the Ferrari man tomorrow is the misfortune of others, in the shape of Lewis Hamilton failing to set any time, after his Mercedes caught fire.

It means the championship leaders have only one Silver Arrow to their bow at the front of the grid, in the form of the inevitable Nico Rosberg, on pole for the sixth time this year. It’s an all-German front row, with Sebastian Vettel in second place for Red Bull after a somewhat frantic session, when a light rain shower hit the track just as Q3 was starting. Row 2 features the consistent Valtteri Bottas, third for Williams, with the second Red Bull of Daniel Ricciardo alongside him. Fernando shares his row with the Finn’s team-mate Felipe Massa and the Spaniard will be hoping to use the advantage of the clean side of the track to beat the Williams in a drag race off the line.

Kimi Raikkonen will start tomorrow’s race from a long way back on the grid because he was bumped out of Q2 after Marussia’s Jules Bianchi put in a very good lap right in the closing moments of the first session. The Ferrari strategy at this point, like that of other front runners, was to secure a place in Q2 without resorting to using the softer compound Pirelli. In simple terms, it was a gamble that worked with Alonso but not with Raikkonen, as the track conditions evolved more than expected.

On the positive side, Raikkonen has clearly been much happier with the handling of his car this weekend, out-pacing his team-mate in one free practice session and being very close to him in the other two. Therefore expect some fireworks as the Finn tries to fight his way up the order, something he is certainly capable of. If it’s dry for the race then the tyres he was unable to use this afternoon will come in useful and if it’s wet, then the skills of world champion might come in useful! In fact, it looks as though Kimi has already moved up one place to sixteenth on the grid, as Kevin Magnussen, who crashed after qualifying tenth, starts from pit lane.

Fernando Alonso (Q3: P5, 1:23.909): “After a chaotic qualifying like today’s, you always think you could have done better. But if you then analyse everything that happened, finishing fifth is a good result, because we made the most of every opportunity that came our way. Getting to start on the clean side of the track is very important as it gives you a chance to make up places at the start and to race with the leaders. The rain expected for tomorrow definitely has an effect on strategy: so far, in the hot and dry conditions, there was talk of two or three stops, but tomorrow everything changes. Both Kimi and I need to score points for the team, because we want to get back the third place in the Constructors’ championship that we lost last weekend. Even starting far back, a good strategy could help us reach that goal.”

Kimi Raikkonen (Q1: P17, 1:26.792): “I am very disappointed with the outcome of qualifying, especially because this weekend I was going well and had a good feeling from the car. After the first run on the Medium tyres the team told me that my time should be good enough to get me through to the next part and so we decided to take a risk and not go out for a second run on the softer compound. Unfortunately, it didn’t pay off and I couldn’t get past Q1. It’s going to be difficult, because there’s not much chance of overtaking here at the Hungaroring. We definitely made a mistake, but now I only want to look ahead. Tomorrow, even if it will be tough, we will do our best to try and move up the order.”

Pat Fry: “Mixed fortunes for our team in today’s qualifying, with our drivers ending up no less than twelve places apart. In the first part, the fact that Maldonado and Hamilton were out led us to keep both cars in the garage, banking on the times set with the Medium tyres. With Fernando this worked, but unfortunately, with Kimi we were caught out by the evolution of the track. It’s very disappointing not to have got through with him because he’s been going better this weekend. Clearly tomorrow he will be on the attack: on this track, it’s not easy to move up the order because of the traffic, but our race pace is good and we will do all we can to turn things around. In the second part of qualifying, the track continued to improve and Fernando got into Q3 easily enough. In the end, when the rain came, we decided to go out immediately, but then it was impossible to finish the lap. The hot track dried out very quickly but, concerned it might rain again, we decided to go out on track earlier than planned and Fernando ended up fifth. Rain is forecast for tomorrow which means it is even harder to make predictions, but whatever the weather we must try and get Kimi back up into the points and to get a good haul with Fernando.”