Ferrari driver Charles Leclerc believes the close battle for third place with McLaren in Formula 1's constructors' championship will be won by the team who makes the least mistakes.

By:
Luke Smith
Co-author:
Pablo Elizalde
Listen to this article

Since scoring a 1-2 finish in the Italian Grand Prix in September, McLaren has seen its grip on third place in the standings loosen as Ferrari has fought back.

Boosted by an upgraded hybrid system on its power unit, Ferrari has outscored McLaren in each of the last three races, turning a 17.5-point deficit into a 13.5-point lead after Sunday's race in Mexico.

Despite the upturn in form from Ferrari, Leclerc thinks speed might not be the deciding factor in the fight.

"It's going to be up to which team is going to do the least mistakes because we are very, very closely matched," Leclerc said.

"There might be races where we are a bit in front, and some others where they are a bit in front. But I don't think this will make the difference. I think the one who will do the next big mistakes will win, and I think today has been a good example of this.

"We've taken a big opportunity with both of the McLarens quite far behind. We managed to get quite a bit of points, which I think is an important time for the third place in the championship."

McLaren boss Andreas Seidl felt the Mexico setback was no reason for McLaren to keel over in the battle against Ferrari, saying difficult days could easily happen the other way around. 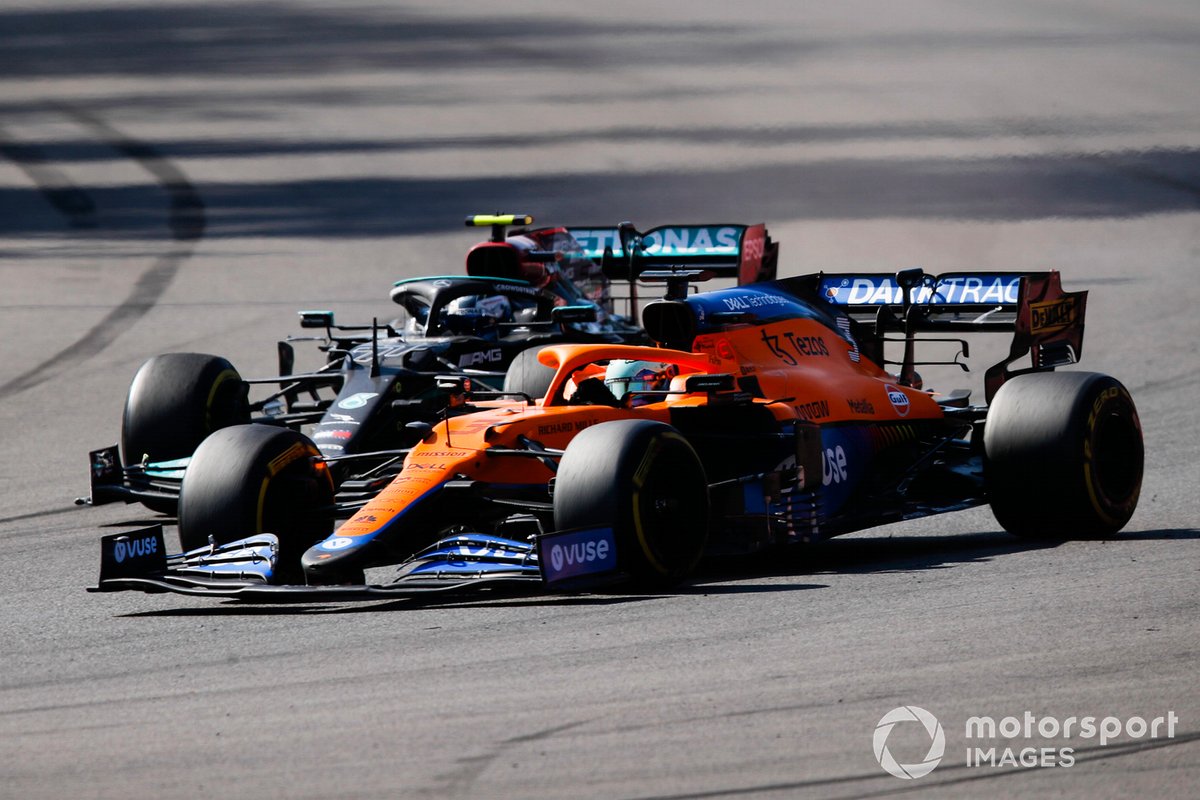 "The most important thing is to accept is that days like today can happen in racing, they're part of the sport," Seidl said.

"At the same time, they can happen to your competitor. So there is no reason to give up this fight. It's important to move on. Luckily there is another race straightaway next weekend, and then we can try to strike back.

"Of course it's disappointing for us today to only score one point, which is a big hit for scoring in the constructors' championship.

"But again, the same can happen to our competitors. We just have to stay focused on ourselves, and make sure that we keep scoring points consistently, which we didn't manage today."

The high-altitude conditions in Mexico meant teams had to run their high downforce aerodynamic packages, somewhere Seidl acknowledged McLaren was "on the back foot compared to Ferrari".

Seidl added that it was "so difficult to predict" which of the remaining four tracks may suit McLaren more than Ferrari.

"There are so many factors that play a role here: temperatures, tyre selection, the downforce level, track characteristics obviously," Seidl said.

"We have seen it many times this year already, that it was difficult to predict and may play out different than everyone expected."

Sainz echoed Seidl's thoughts, believing it would remain "very tight" in the battle for third until the end of the season.

Sainz added: "It's going to be super tight to the end. You get an example of today, in Turn 1, Daniel was ahead of us and that's a fact.

"McLaren is in the mix in every weekend. Then obviously he had a crash. Up until Turn 1 there was a McLaren in front of the two Ferraris. They have their strengths. They have very good starts, they have a car that is very good in high-speed corners.

"So as soon as we go to tracks that are more favourable to them, like Monza or Sochi where they were miles ahead, then it's going to be tricky to beat them.

"What this new power unit has allowed us is to keep ourselves in in the mix in every track and put up a good fight, and at the moment we are executing that fight nicely and we are finally ahead in the championship."