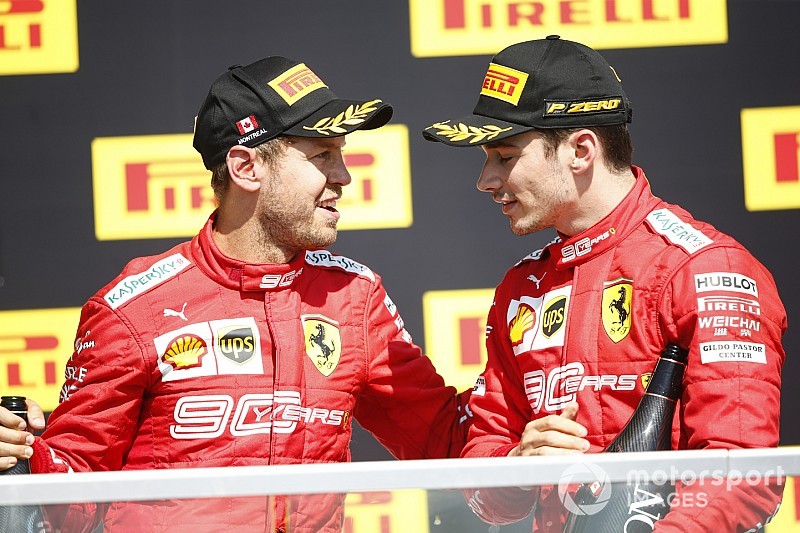 Ferrari has admitted that it made a mistake in not telling Charles Leclerc about the five-second penalty handed down to Sebastian Vettel in the Canadian Grand Prix.

Vettel was given the punishment for not rejoining the track safely and forcing Lewis Hamilton wide on lap 48 of the race when he made a mistake and cut across the first chicane.

In the closing stages of the race, Vettel’s pace dropped off and that allowed Leclerc in third place to close up on the two leaders.

But Lecerc was not aware that there was the chance of moving up to second place if he got close enough to Vettel - and in the end he missed out by just over one second.

Speaking after the race, Ferrari team principal Mattia Binotto revealed that in the intensity of the situation, there had been no communication with the Monegasque driver that Vettel had a punishment.

“We didn’t [tell him],” said Binotto. “It has been a mistake from our side. We were very busy on the pitwall and simply we forgot. We should have done it, but we didn’t.”

Leclerc says that even had he known about the penalty, he would not have been able to make any further progress to close the gap.

Asked if he would have done anything differently if he had been made aware of Vettel's predicament, Leclerc said: “No. Because anyway I was pushing very hard to try to catch up.

"I was pushing hard so that if anything happened I had the opportunity to be as close as possible to do so. So no, it would not have changed my approach.”

Bottas "quite limited" by temperature "trouble" in Canada