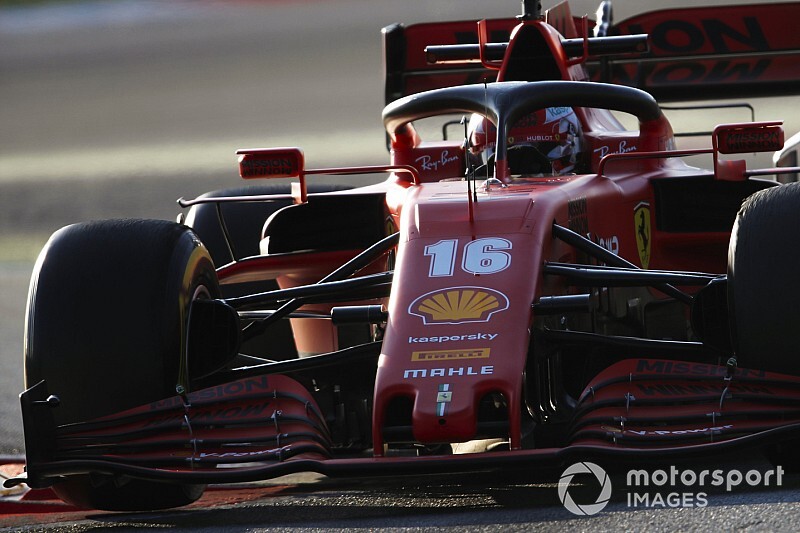 The new Ferrari Formula 1 car offers greater flexibility in set-up direction to avoid being too circuit-dependent, according to Charles Leclerc.

Leclerc completed the first extended run for the Ferrari F1000 car at the start pre-season testing in Barcelona on Wednesday, recording 131 laps.

The Monegasque returns to the wheel of the car for the start of running on Thursday before handing over to teammate Sebastian Vettel for the afternoon session.

Now entering his second year with Ferrari, Leclerc has been able to influence the design of the car for the first time to try and better suit his needs - something he feels has been accounted for.

"Obviously last year every race they were noting all my comments, so they obviously know me a lot better as a driver," Leclerc explained.

"They know what I need, which balance I need to perform at my best on track, and they tried to at least have the flexibility in the car set-up to fit my driving style, which will be the biggest difference for this year I guess.

"This should be a step forward."

Leclerc finished 11thfastest on the opening day of testing as Ferrari opted against chasing performance straightaway, but was encouraged by his initial findings.

"For sure we've got more flexibility in the car set-up this year. So this is always a good thing for both drivers," Leclerc said.

"We can adapt the car more in details to our driving, then - again, we didn't push the car yet, but we know we've got more flexibility, this is a fact.

"This can only be positive."

Leclerc denied the bid to make the set-up more amenable to the drivers had been due to any large difference in his and Vettel's driving styles, saying it was to avoid making the car too suited to any one circuit.

"The main reason to do that is that we've seen last year that in some races we've been very strong, in some others we've been struggling quite a bit more," Leclerc said.

"To be able to adapt the car to different tracks we need more flexible in terms of set-up.

"That was the main reason, but for sure it will help us, but it's not like we are going from one extreme to another with both of our driving styles.

"It will just help us on the tracks we've been struggling last year to have a bit more flexibility and to have a better set-up on these tracks.

The Barcelona F1 testing as it happened