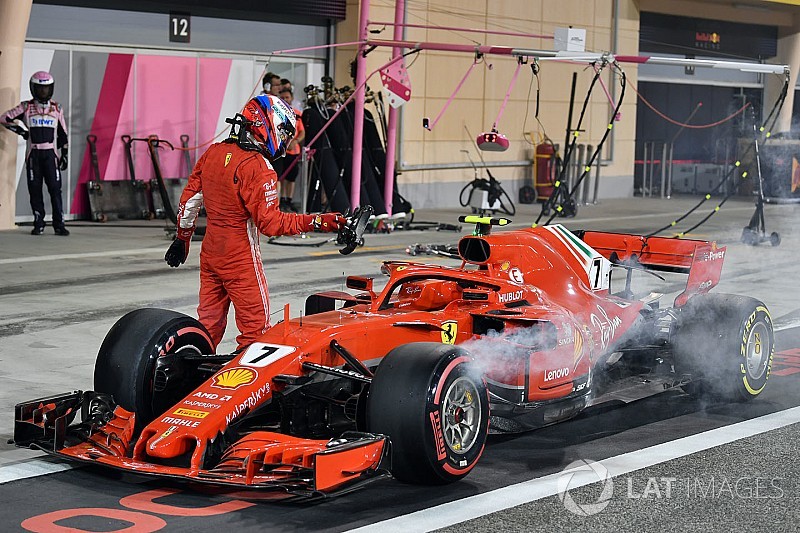 Ferrari has revealed a sensor confusion triggered the unsafe release of Kimi Raikkonen's car that led to a pit crew member suffering a broken leg during the Bahrain Grand Prix.

A problem removing the left-rear during Raikkonen's second pitstops delayed Francesco Cigarini from fitting a new tyre, and he was standing in front of the wheel when the Finn was given the green light to leave the pit box.

Cigarini was hit by Raikkonen's car as the Finn pulled away, and required surgery after sustaining a fractured shinbone and fibula.

Ferrari boss Maurizio Arrivabene revealed that Ferrari had conducted a review into the procedure together with the FIA to determine why the system gave Raikkonen the signal to go when the left-rear wheel had not been changed.

"The team was hurt that a person was injured, so it was in our interest to review the overall procedure," he said when asked by Motorsport.com to explain what happened.

"We have a procedure to ensure the pitstops during the race are done as safely as possible.

"In this case we have three factors: human control [the pit crew members], mechanical [the wheel gun] and an electronic device [a sensor to determine a properly attached wheel]."

Arrivabene said this led to the "mishandling of the rear left" as it was "not perfectly read by the electronic device, which gave the green light".

Motorsport.com understands the system is designed to check whether a wheel is securely fitted and whether the wheel gun has been sufficiently active.

As the old wheel was not removed, and the gun was disengaged and then re-engaged to try again, the system registered it as a completed wheel change and gave Raikkonen the green light.

Arrivabene said Ferrari would ensure this cannot happen again, stressing that "it's in our interest, because we care about our people before anything else".

The exact solution is unknown, but it is believed Ferrari has modified how it uses sensors during the process to ensure the system can recognise if a wheel has not actually been changed.

Arrivabene said he spoke regularly with Cigarini this week and that his employee is now recovering at home in Italy after his initial care in Bahrain.

"I would like to thank our team doctor, the FIA medical staff and also the authority of Bahrain that granted to us immediately the best doctor in Bahrain to do the surgery," Arrivabene added.

"They were assisting us 24 hours [a day], literally, so thanks to all of them."

Hamilton: Red Bull "not on the same level" as Mercedes, Ferrari