Ferrari has revealed that it used a "dummy" radio message to trick Red Bull into putting Sergio Perez on to a two-stop strategy at Formula 1’s Abu Dhabi Grand Prix.

Perez was running in second place, just ahead of Charles Leclerc, in the middle phase of the Yas Marina race, with the pair locked in a tight fight for runner-up spot in the drivers’ championship.

But with Red Bull appearing to have a bit more pace, Ferrari knew that its only chance of getting Leclerc in front was through strategy – and that meant forcing Perez on to a two-stop.

That opportunity came on lap 33, when Ferrari gave the impression that it was going to gun for an undercut on Perez to try to get Leclerc ahead.

It told the Monegasque driver: "Box opposite Red Bull."

However, the message was not real as Leclerc was long committed to a one-stop, and Ferrari was using the call to only make it look like it was going for a two-stop.

The trickery worked as Red Bull responded and pulled Perez into the pits immediately to cover off Ferrari.

Red Bull team boss Christian Horner admitted after the race that a combination of Perez’s tyre condition plus it seeing that "Ferrari were gearing up for an undercut" was behind its decision to stop the Mexican.

With Leclerc having no intention of stopping, that meant Perez had to recover all the ground lost with the tyre change, which he ultimately failed to do, as he finished 1.3 seconds behind his Ferrari rival.

Reflecting on the strategy call, Leclerc told Sky Sports: "I have to say that everything that we've done was exactly what we wanted to do.

"That's what was planned before. The laps where, I can say it now, where we dummied him and made him think that we were going to pit opposite. He took it and went for the second stop. So we did everything perfect. I'm very proud of our execution." 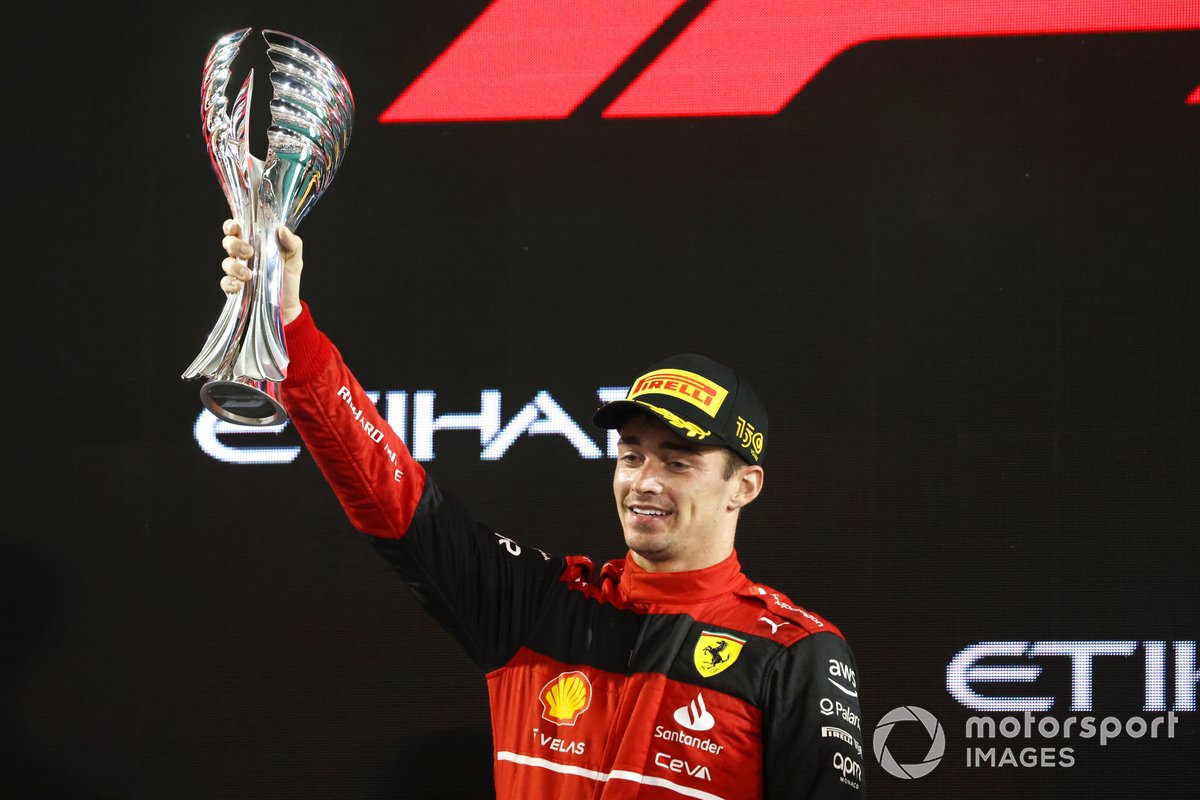 Ferrari team principal Mattia Binotto praised the way that the strategy was pulled off to help Leclerc finish second – especially considering it is an area of operation where the Maranello squad has made mistakes this season.

"I think that certainly the dummy call on the Red Bull was a fantastic call from the pits," said Binotto.

"I think P2 and P2 [in the drivers’ and constructors’ championship] has been the balance of the entire season, not only today. But today certainly we did the proper job.

"The dummy pitstop on the Red Bull was the right call. And I think that overall, we made it right. So happy for them, happy for the team.

"I think that as well Ferrari, when it is making mistakes, there is always a lot of criticism. But, as well, I know that these guys can do very well."

Leclerc reckoned that the team, having performed flawlessly in Abu Dhabi, was all the more impressive considering the extra pressure on it through the battle for position in the championships and the rumours circulating over the future of Binotto.

"We executed the right one, and the one with the most pressure," he explained.

"Obviously, the outside pressure with all the rumours going around coming into the weekend, and the pressure of keeping the second place in the drivers' and constructors' championship.

"We managed to perform at our best in a situation like this, which makes me very proud of the team.