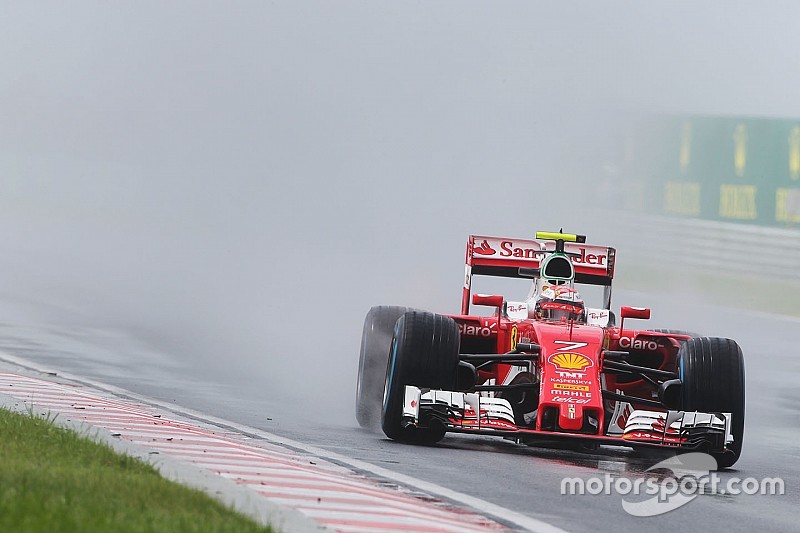 Ferrari duo Kimi Raikkonen and Sebastian Vettel have called for improvements to Formula 1's wet tyres, as they believe they are a big contributing factor to cars not being able to run in poor conditions.

The length of the safety car start at the British Grand Prix, plus the number of red flag incidents in Q1 in Hungary, have re-opened the debate about just how well the current generation of cars can run in wet weather.

Raikkonen believes that the main issue is that the current extreme tyre does not remove enough water from the track, which can cause aquaplaning.

"The wet tyres, what we have now, in my view, they should handle better cleaning the water," he said.

"They are quite sensitive to aquaplaning. In the past, the early days when I started, the wet tyres, you could run them in very very wet conditions without really big issues with the aquaplaning.

"But obviously then cars changed and a lot of things changed. The only big issue is the aquaplaning and that's the tyre. It's the same with any road tyre. If it doesn't clear the water, there's not much you can do."

Vettel added: "It is fair to say that the extreme wet we currently have is not good and has been criticised in the past. And to be fair it hasn't changed, so the criticism hasn't changed."

Vettel does concede, however, that part of the explanation for why cars could run in extremely wet weather many years ago is down to simple design evolution.

"I don't think that we are unable to drive in the rain," he said. "In general all of us, I don't think we are entirely happy with the extreme wet tyres. The water drainage isn't good enough, and the risk of aquaplaning is very high.

"But if it rains as hard as it did before qualifying when it was delayed and red flagged because of the amount of water and people spinning off, I think it is also fair to say never in history you had a Formula 1 car or driver who could manage these conditions because you become a passenger.

"There are things we can improve like I mentioned with the tyres, but there will always be a sort of limit with the way the cars are set up now. We are running much lower to the ground than in the 1980's.

"If you compare the cars, the 1980's car is a rally car you can take on gravel. Our car is made for the race track. That is 30-35 years of development, and it is clear you try to optimise as much as you can."

Rosberg summoned to the stewards over yellow flags