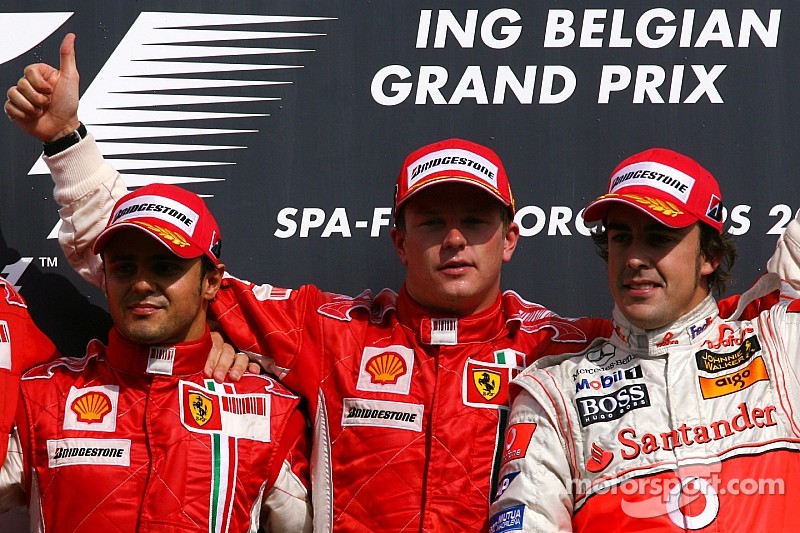 Next Sunday's Belgian GP will be the 59th and Scuderia Ferrari has won 16 times.

Maranello – After the summer break, Formula 1 action resumes at one of the most historic venues on the calendar, Spa-Francorchamps, home to the Belgian Grand Prix. Sunday’s race will be the 59th and Scuderia Ferrari has won 16 times, making a hit rate of 27.5%. Over the years, the race has been held at three venues: Spa (46 times,) Zolder, in the Flemish part of Belgium (10 times) and twice at Nivelles-Baulers on the outskirts of Brussels.

The first ever Belgian Grand Prix was held in 1950 and was won by Juan Manuel Fangio in an Alfa Romeo. Ferrari then won in 1952 and 1953 with Alberto Ascari at the wheel of the legendary 500. The Italian had a special feeling for this track and reckoned that Eau Rouge, the uphill esses which are still a challenge today, as the nicest corner he had ever tackled. Ferrari also won with Peter Collins in 1956.

In 1961, Ferrari was totally dominant taking the top four places with the 156 F1. Phil Hill won from Wolfgang von Trips, Richie Ginther and Olivier Gendebien. The first non-Ferrari finisher was John Surtees in the Cooper. In fact it was the English ace who took Ferrari’s last win on the old Spa layout, which was 14 kilometres long. It took place in 1966 and was one of the toughest races of all time. Surtees, partly down to the sensitivity he had developed from motor cycle racing, was the only one not to have any problems when, on the opening lap, the pack ran into a proper storm at Bourneville corner. Surtees got through unscathed, while Jochen Rindt who was behind him, spun several times but without any major consequence. Nine drivers went out, including Jackie Stewart who rolled his BRM and had to be pulled out by Graham Hill just seconds before the car caught fire.

The races at Zolder

The 1966 race and those after it led to Spa being considered too dangerous for Formula 1. So the Circus set up its tent at the 3.7 km Nivelles-Bauliers track, which was definitely safer, but not very spectacular. So another solution was tried in 1973, moving the race to the 4.2 km Zolder track. It suited Niki Lauda perfectly and he won for Ferrari in 1975 and ’76. At the end of the decade in 1979, came another win, this time courtesy of a bit of Jody Schecker magic.

What had seemed to be a lucky circuit for Ferrari was sadly also the scene of one of the greatest tragedies that befell the team. Saturday 8 May 1982, qualifying took place for the Belgian GP and the mood between the two Ferrari drivers was not great after Didier Pironi had disobeyed team orders, passing Gilles Villeneuve on the last lap at the previous race in Imola. There were just a few seconds to go and Villeneuve asked to go back out on track, some say to try and out-qualify his team-mate. The Canadian set off but clipped the back of a March that Jochen Mass was driving back to the pits. The German had moved right to give Villeneuve the racing line, but the Canadian did the same. The Ferrari 126 C2 was launched into the air and flew through the air with Villeneuve thrown out of the car still in his seat. He was still alive when transported to hospital but died during the evening. Ferrari pulled out of the race as a sign of respect. Formula 1 went back to Zolder one more time, in 1984 when Ferrari won with Michele Alboreto.

From 1985 onwards the race was always held at the new 7 kilometre Spa, which still maintained much of its old style with the La Source hairpin immediately after the start, Eau Rouge and the Kemmel straight, which is where the track diverts from the old one, goes into a very difficult mixed section, before rejoining the old layout with a series of flat out corners which lead to the Bus Stop chicane, so named because an actual bus used to stop there. The Scuderia returned to winning ways having joined forces with Michael Schumacher, at this track where the German made his Formula 1 debut in 1991 and took his maiden F1 win in’92. He won here in 1996, his first season with Ferrari, doing it again the next year. He’d have made it a hat trick, except that in appalling visibility, he ran into the back of David Coulthard, going slowly on the racing line, the Ferrari losing a wheel. It almost came to blows in the pits! Schumacher did it again in 2001 and 2002, while in 2004, finishing second was good enough for him to take his seventh world title.

Ferrari won again at Spa in 2007, courtesy of Kimi Raikkonen and the following year, it was Felipe Massa who was eventually declared the winner after Lewis Hamilton was given a penalty for an incorrect passing move on Raikkonen. The last win to date for the Scuderia was also down to Raikkonen in 2009, when he had to fend off Giancarlo Fisichella in the Force India for several laps.