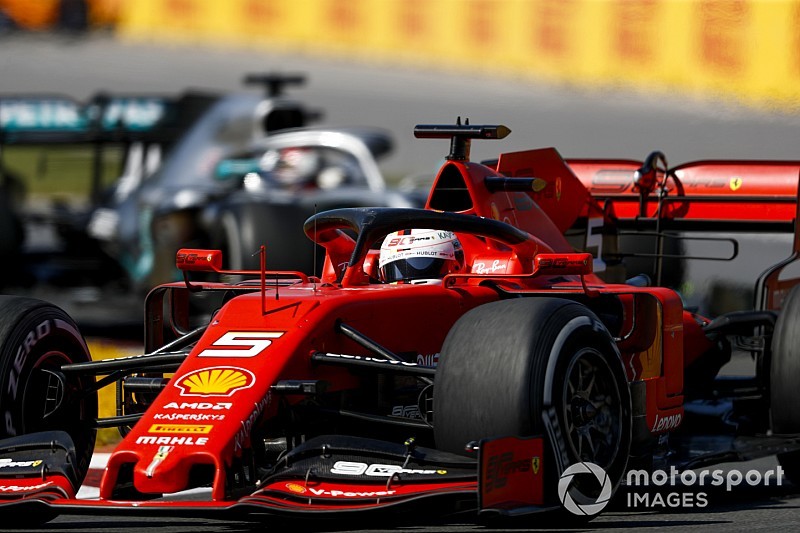 Ferrari insists that its race-winning pace at the Canadian Grand Prix does not mean it has found an answer to the "weaknesses" that have hurt its campaign.

Sebastian Vettel took pole position in Montreal and finished first across the line, before a five-second penalty for forcing Lewis Hamilton wide when he rejoined the track following an off dropped him to second.

While the Montreal showing gave Ferrari some encouragement that it has a car that can take the fight to Mercedes, team principal Mattia Binotto is clear that the fundamental problems holding it back have not been addressed.

In particular, the issues that Ferrari has faced getting its tyres working properly have not been cured and the team believes that it was track characteristics that helped more at the Circuit Gilles Villeneuve.

"We know it is a circuit that is more power sensitive, and it is rear limited not front [limited] like Barcelona," explained Binotto. "So it is more similar to a Bahrain than a Barcelona.

"We knew that coming here we would be closer to Mercedes, but how much closer I don't think we had any clue.

"I think the Friday performance relative to them was difficult, and the track improvement through the weekend, with more grip on the track, somehow we coped with the weaknesses we have.

"But the car as a matter of fact is exactly the same as it was in Spain. [There have been] no upgrades since then, so let's say the weaknesses we have are still here on the car. It is as simple as that.

"We need to work and try to improve, because there will be other races that are not Canada. We need to keep fighting and challenge them."

Ferrari in working on a host of new concept parts for its car that it hopes will help it better manage its tyres.

It believes its struggles, especially in slow speed corners, is down to the way its SF90 is not getting energy through the rubber.

Dixon: Aeroscreen is “maybe where Halo needs to go”