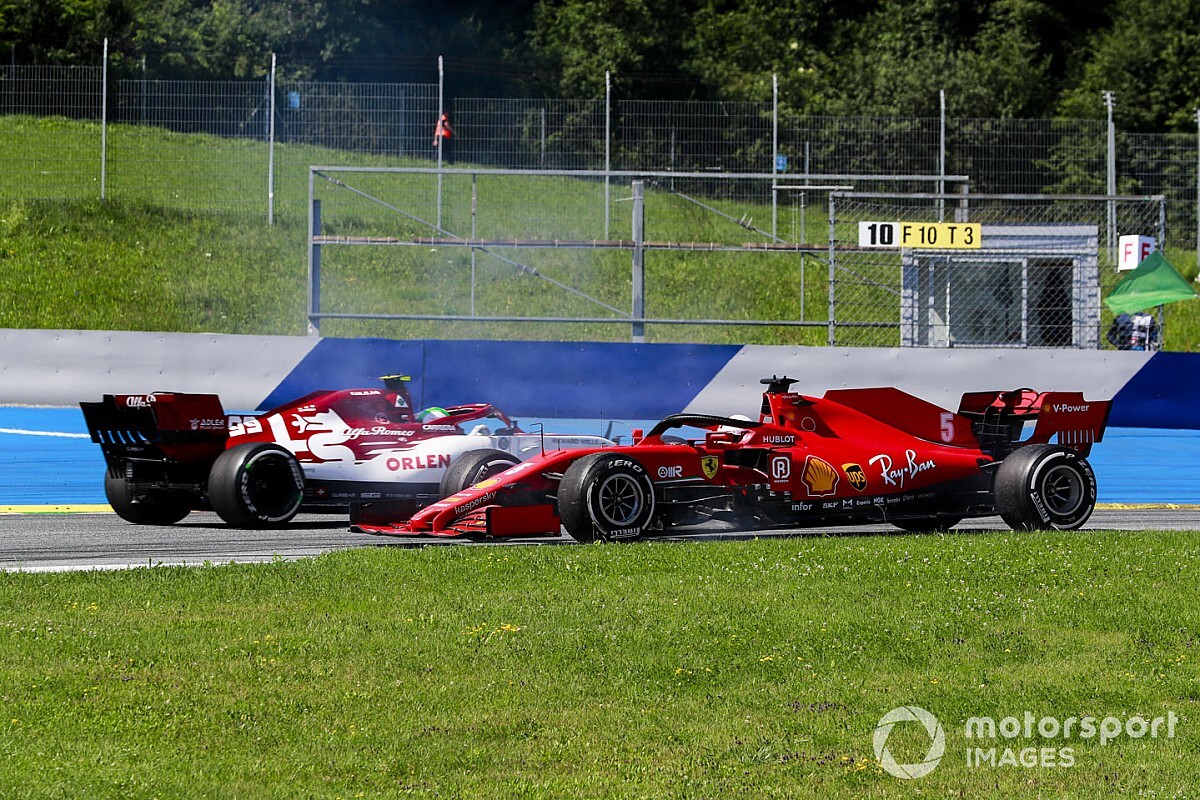 Ferrari Formula 1 driver Sebastian Vettel says his SF1000 was "unrecognisable" in Sunday's Austrian GP compared to earlier in the weekend when he was encouraged by its form.

From 11th on the grid Vettel had a difficult race, spinning after making contact with the McLaren of Carlos Sainz, and eventually finishing 10th.

Meanwhile his teammate Charles Leclerc had a sensational run to second, helped by a time penalty for Lewis Hamilton, who was runner-up on the road.

Speaking on Monday evening Vettel revealed he had spent the day getting his head together in the local countryside.

"Since I spend the time between the races here, I took advantage of the sunshine," he said on ServusTV.

"The speed was simply missing. We are still looking. There are maybe two or three things that were not quite ideal. The car was unrecognisable to the feeling I had on Friday. So all in all, it wasn't a good day for me."

Asked about the clash with Sainz, which occurred while the Spaniard was battling with Leclerc, he said: "It wasn't supposed to be an attack. I just wanted to be as close as possible.

"The two of them were fighting a bit. I didn't expect Carlos to move in at the last minute. It's my fault, I didn't want to touch him and then I dropped the anchor and locked the rear wheels.

"For not having a handbrake, I think I did a good job. But of course it was not intentional to turn the car around.

"I was very annoyed about it. In retrospect, I can describe the situation as I saw it from the cockpit. But still, it must not happen. This is an absolute no-go. Without that I would have had much better chances.

"I still had a new set of soft tyres because I didn't make it into Q3 on Saturday. In the end, it would have allowed me to do quite a bit, even though I was lacking speed.

"But still the advantage of the tyres alone could have made up ground in the end. That's why I was very annoyed."

Vettel was asked if Leclerc's run to second had made up for the team's obviously disappointing overall form.

"No. But in the first step you have to acknowledge that. He drove a good race. I am the first to recognise the performance of others. The car is not as strong this year as we had hoped. Let's see how long the season is left. We are certainly not where we wanted to be, clearly."

Vettel also talked about the Ferrari update package which was originally scheduled for Hungary, seemingly unaware that the team had just officially confirmed that some elements have been fast tracked for next weekend's Styrian GP.

"The team is trying everything. If we're lucky, maybe we'll get a part of it. But it's not confirmed yet. Maybe it will happen during the weekend. We'll be surprised.

"Apart from the fact that we have a long way to go, I was actually very satisfied. I was right in the rhythm on Friday and Saturday morning, and in qualifying everything went a bit the other way.

"On Sunday I was confident that it would be a better race, but the trend from Saturday continued on Sunday, so I had a hard time fighting the whole race.

"Until then it was very, very close. I think I was in front on Friday and he on Saturday morning. In qualifying the gap widened further. Everything wasn't going well at my opening race. But all the better from a team point of view that it worked for [Charles]."