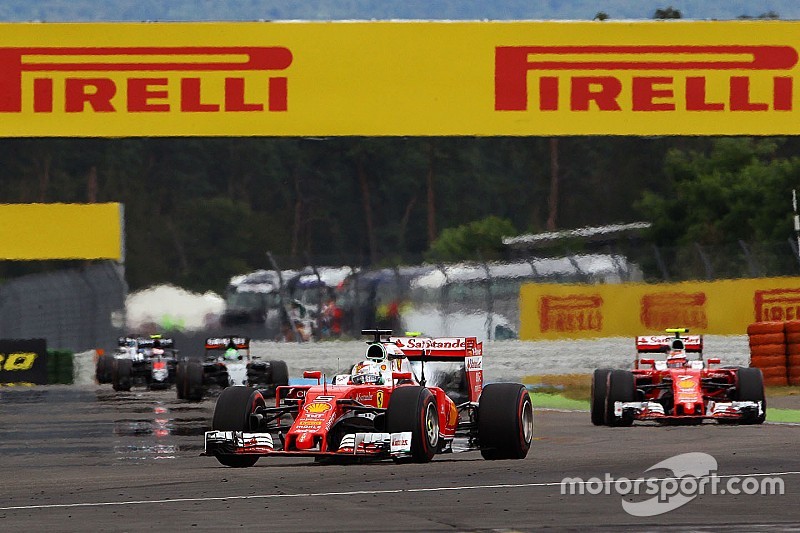 Ferrari says that a lack of progress since the Spanish Grand Prix in developing its chassis is to blame for the slump that has allowed Red Bull to overtake it in Formula 1.

The Maranello-based team had been Mercedes' closest challenger at the start of the campaign, but more recently it has fallen behind the resurgent Red Bull that has got stronger over the first half of the year.

Red Bull's double podium at the German Grand Prix also helped it overtake Ferrari for second in the constructors' championship.

The situation is far from ideal for Ferrari, which recently parted ways with technical chief James Allison – but its cause can be traced to what happened after Barcelona.

When asked by Motorsport.com about where the momentum of the season had gone, team principal Maurizio Arrivabene said: “In Canada we reacted quite well with the engine.

“But if I look at the situation now and I go back, I think we don't have great improvements in terms of downforce since Barcelona. That is the problem.

“We know where we have to work now and we have to do it as soon as possible, even if it is not easy.”

Arrivabene has suggested that the situation is complicated because it is hard to find a good balance between mechanical grip and aerodynamic grip.

"We have to work in both areas because they have to talk together because sometimes they talk different languages at the moment.”

Arrivabene insists that Ferrari is not going to write off its campaign, despite the Red Bull situation, and has hinted about further restructuring of its technical department in the weeks ahead.

“I have to say they [Red Bull] have improved quite well, it is in front of all of us, and that is something that was on our mind.

“But it doesn't mean we are going to surrender during this period. We have to think about it and react.”

He added: “We are reviewing the team, without panicking because taking that decision means we are clear in our mind what to do.

"And moving forward for the rest of the season we know as well where we have to improve.”

Ricciardo voted Driver of the Day in German GP