Webber To Meet With Mateschitz This Week

Mark Webber's plans for 2012 could be decided this week, but it might not be public knowledge for "months", the Australian driver suggested on Tuesday.

Dr Helmut Marko stirred the pot in Hungary by suggesting that the 34-year-old will "probably" retire after racing one more season with Red Bull in 2012. 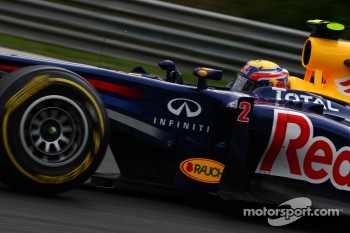 Team boss Christian Horner played down the Austrian's comments by suggesting Webber might decide to stay in F1 for a few more years, agreeing that a new deal for 2012 is likely.

"I am having fun," Webber said on Austrian television Servus TV on Tuesday, "and on Thursday will have a good conversation with Dietrich Mateschitz.

"During the summer break we will discuss it one way or the other, then we will know in the next few months."

Webber has had a less than satisfying 2011 campaign so far, while his teammate Sebastian Vettel ran away with an arguably unassailable title lead.

But the Australian thinks he is improving.

"The next victory will come when I least expect it. Just as with my first one," he said.

"I have the feeling that I am getting stronger all the time. It's going in the right direction."

Webber insisted that he has not decided what to do in 2012.

"Whether I'm here depends ultimately on my motivation and whether I can race at the top level. At the moment it looks as though I will keep going.

"Naturally I'm speaking to the people who are close to me and who have supported me and I will make my decision when I need to. Soon," he said.

How close is F1 fuel to road car fuel?