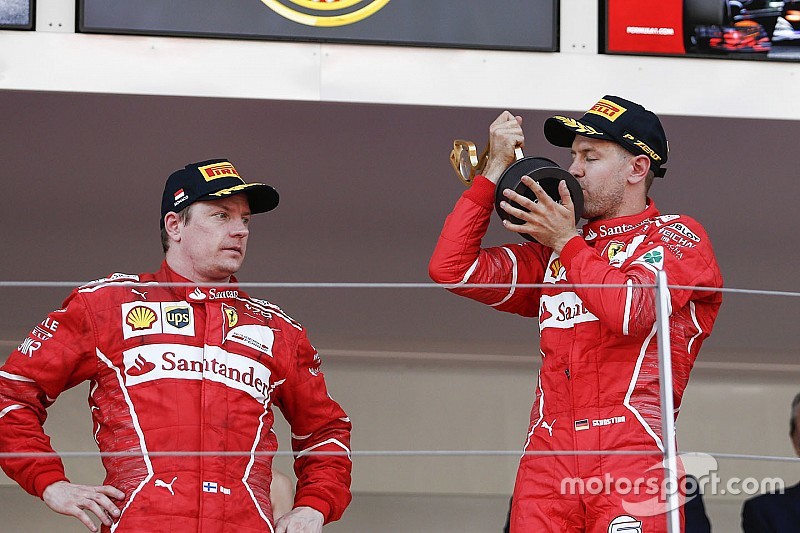 Vettel got ahead of Raikkonen during the pitstops after being left out for five more laps than the Finn, when they took their one and only tyre change during the race.

It became clear the supersoft which Raikkonen switched to was not a match for a used ultrasoft, allowing Vettel to benefit.

Vettel denied Ferrari came up with the strategy to switch the order of its cars to boost its title hopes but Lewis Hamilton suggested otherwise when he said Ferrari had chosen Vettel as its number one driver in the title battle.

When asked for his view on Ferrari's strategy, Wolff said: "It wasn't clear how the tyre would perform. They needed to pit one of the two drivers and put them on the supersoft.

"And how it all panned out, the supersoft was not quick enough and Sebastian was able to put out some stunning laps on the used ultrasoft and that gave him the opportunity over Kimi.

"I don't think they saw it coming. At the end of the day, it's the right result for the team and for the driver's championship - but I don't think it was orchestrated."

Ferrari moved 17 points clear of Mercedes in the constructors' championship with the one-two in Monaco.

Wolff congratulated the team and joked Ferrari was having to answer the same questions about its strategy that Mercedes did when it was dominating the championship.

"They are finally where we were back in the days when you finish one and two and you have to explain why the right guy won," he said.

"First of all, they deserved to win, they had the quickest car. As a team result, a one and two is good. Congratulations from our side - we need to give them credit."