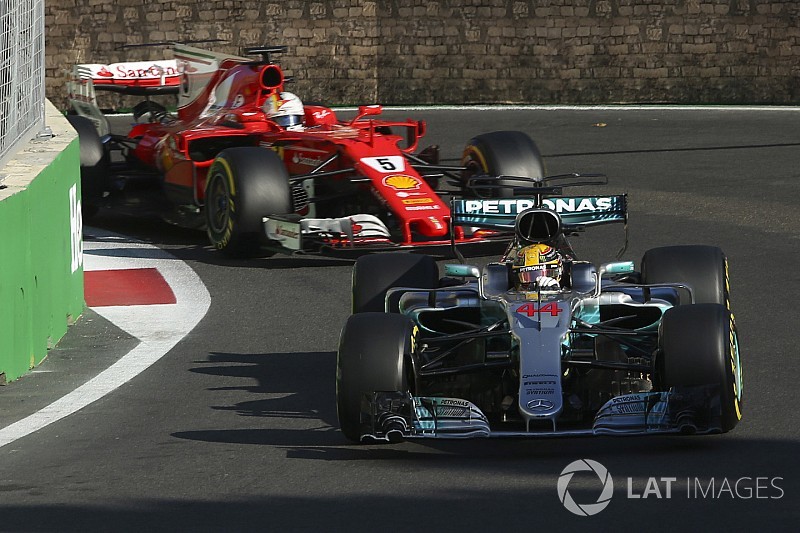 Although teams are busy gearing up for the next race in Austria, Formula 1's attention on Monday will be on Paris, where the FIA will deliberate on the clash between Sebastian Vettel and Lewis Hamilton in Baku.

Following the controversy of Vettel's swerve into Hamilton behind the safety car in Azerbaijan, and questions raised about whether the German's 10-second stop-go penalty was harsh enough, motor racing's governing body is to investigate the matter again.

In a brief statement issued last week, the FIA said that: "Following the recent incident at the Azerbaijan Grand Prix in which Car 5 (Sebastian Vettel) was involved in a collision with Car 44 (Lewis Hamilton), on Monday 3rd July, the FIA will further examine the causes on the incident in order to evaluate whether further action is necessary."

Details about the process, and who will be involved in Monday's investigation, have not been released, but sources suggest that Vettel himself has been invited for a private meeting with FIA president Jean Todt to discuss the matter.

Whatever happens in the corridors of the FIA's headquarters in Paris, a statement on the outcome has been promised before this week's race at the Red Bull Ring.

It is entirely possible that following the review of the matter, and any statement or apology that Vettel could make, that the FIA opts to draw a line under the matter and move on.

Both parties could also agree to a joint sanction - such as a number of days work for FIA Road Safety campaigns. Or there could be some form of suspended ban that could threaten a fresh hearing if there is a repeat offence in the future.

But if the FIA concludes that action in sporting terms is necessary now, then it will not be a matter of handing out a punishment in the next few days. For there is a very strict process that needs to go through before the matter reaches its end point.

Ultimately, the key decision to be made in Paris on Monday is whether or not there are grounds for the Vettel incident to be looked at again and a case to be heard in front of the FIA's court – known as the International Tribunal.

Should FIA president Jean Todt choose to take the Vettel matter to the International Tribunal, then charges will be brought and a judging panel will be made up of at least three judges from the FIA's roster to lead the hearing.

The process will also not be a quick one, so any hearing would be unlikely until after the British Grand Prix at the earliest and it could even drag out until the summer.

Once charges have been raised, then the respondent (in this case it would be Vettel) will be granted at least 15 days to submit his response, with the prosecution then given a further 15 days to respond if required.

There is then supposed to be a period of at least 15 more days between the reply by the prosecuting body and the hearing, although in theory all of this could be fast tracked if necessary.

The International Tribunal has a fairly open hand in terms of choosing what punishment is handed down if it rules that the defendant has been found guilty.

One interesting point that could be relevant in the Vettel case is that previous records will be taken into account – and that acting 'intentionally' does not have to be proved.

Vettel already has nine penalty points on his licence, and escaped a Tribunal hearing last year after apologising profusely for an outburst at the Mexican GP.

The statutes say: "Subject to the principle of proportionality, the IT shall take into account the gravity of the facts, the degree of culpability, and past record and character of the person in order to determine the nature and severity of the sanctions

"Unless stated otherwise, offences or infringements are punishable, whether they were committed intentionally or negligently."

Once the hearing has been completed then a decision by the court will be taken by a simple majority of the members of the judging panel. If there is a deadlock, then the President of the Hearing will get the casting vote.

But the International Tribunal finding are subject to appeal, so if Vettel feels that any sanction handed down is unfair he can then take the matter to the International Court of Appeal – a process could take several more weeks.