Formula 1 is planning to introduce biometric gloves from next season in a bid to help medical personnel better assess the physical condition of a driver after accidents.

The new technology, which features a 3mm thick sensor, will be stitched inside every drivers’ gloves in 2018.

Initially the sensor will be used for monitoring a drivers’ pulse rate and the amount of oxygen in the blood, but in the future it is hoped that there can be monitors for body temperature and respiratory rate.

Mercedes, Ferrari and Red Bull drivers tested the sensors during the Hungarian Grand Prix weekend, and a decision will be made soon on where best to stitch the sensor.

With the project having been supported by the Global Institute for Motor Sport Safety, it is hoped that the data from the sensors can help make the difference in big accidents.

FIA Deputy Medical Delegate Dr Ian Roberts told the FIA’s AUTO magazine: “We know that the monitoring of people is essential in terms of their medical care.

“Drivers in incidents are no different. We would like to start monitoring and assessing them as soon as we possibly can. But the equipment that we currently use is relatively bulky and is only applied after the incident has happened.

“There are also times when the driver isn’t immediately accessible to us, so if we can’t see him or we’re not actually next to him, there’s limited information that we can get.”

Roberts suggests that the data from the sensor will be especially useful in incidents like Carlos Sainz suffered during final practice at the 2015 Russian Grand Prix – when he was left trapped under a barrier and it was hard to assess his conditions (pictured below).

“Accurate monitoring was impossible until we got hands-on, and obviously we couldn’t do that until the barriers were moved,” he added.

“If we had monitoring on him straight away we could have planned our rescue even better than we did.

“With this new technology, the moment a driver has an incident we will receive physiological readings and biometrics, so he is continually monitored from point zero right through to the initial response and on to the medical centre.” 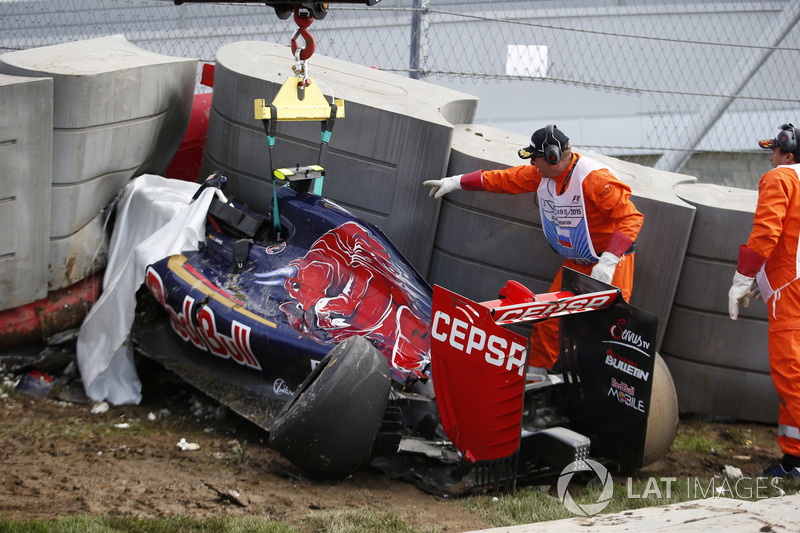 The Scuderia Toro Rosso STR10 of Carlos Sainz Jr., in the Tecpro barriers

Why the warning signs are still lurking for Mercedes at Suzuka