Tech analysis: What is going on with Red Bull's RB13? 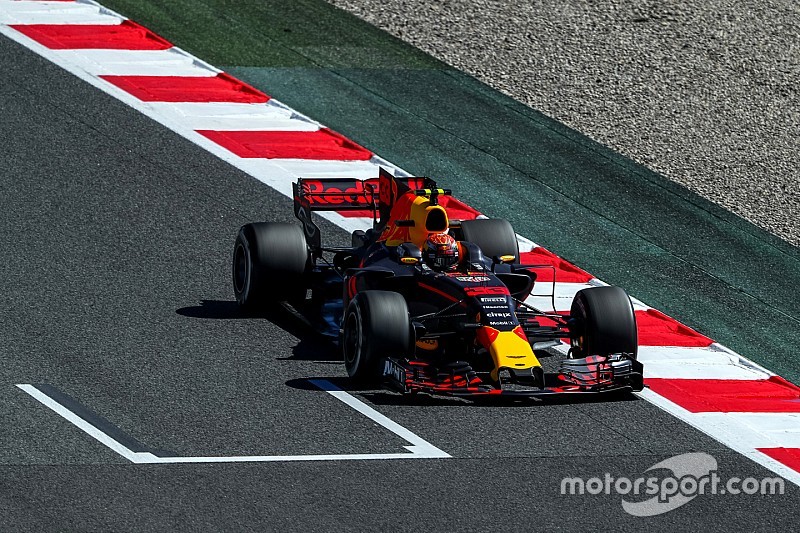 Red Bull had always singled out the Spanish Grand Prix as the race where it would deliver its first major upgrade after a start to the campaign that had fallen below expectations.

But while the team fell short of the radical overhaul that some had suggested in the build-up to the weekend, the changes did appear to deliver the step the team had hoped for – as it qualified closer to pole position that it had at any race this season.

But there remain many intriguing aspects about the RB13, as Red Bull has adopted a philosophy very different to those used by other teams.

The RB13 is, for example, extraordinarily simplistic when compared with the rest of the grid but manages to defy expectations, primarily due to the way in which it creates downforce.

For it has to be viewed as extracting performance from its structural whole – rather than aerodynamic daisy chains. Here we look at the story of the team’s season and how the RB13 has evolved. 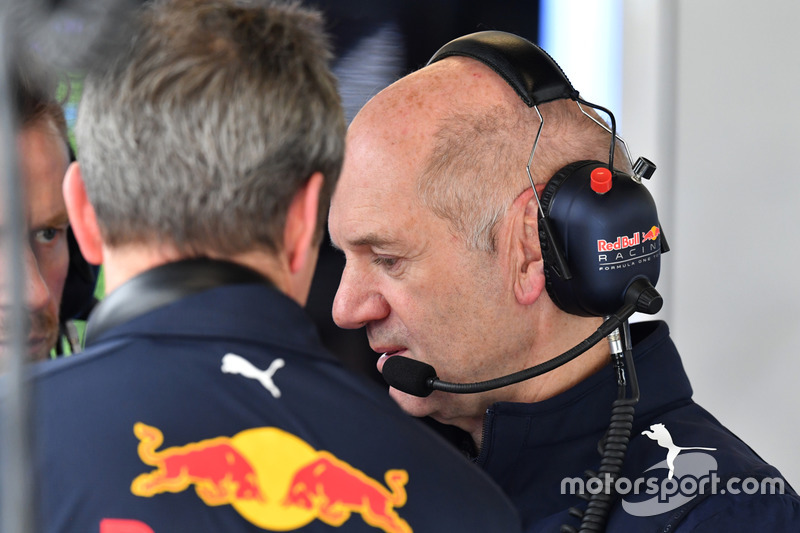 Adrian Newey’s involvement in F1 has dwindled in recent years as the famed aero guru has taken on other projects outside of F1, primarily because he had become disenchanted by the increased restrictions being built into the regulations

You may have expected the regulation changes for 2017 to have reignited his interest but, at a time when he was focused on Aston Martin’s new hypercar, he remains at arm’s length to the F1 project.

However, he was still involved when he could and the car still emotes a sense of what Newey instills in his cars, lacking drama but delivering results - albeit a little adrift at this stage of what those ahead are capable of.

Like many teams, Red Bull has a relatively horizontal management structure including Rob Marshall, Dan Fallows, Paul Monaghan and Pierre Wache, all of who are responsible for the various facets of its car design.

And although Newey may not have been as involved in the RB13 as previous machines, his philosophies have rubbed off on those who have worked with him – so the car has all the hallmarks of a Newey-penned machine.

But since pre-season testing, Newey has taken on an increasing role in helping steer the RB13 back to competiveness, and the intensity of his work in Spain last week showed that his focus was now properly back on matters at hand.

Red Bull first flourished as the sport embraced an in-season testing ban back in 2009 and went from strength-to-strength. Its CFD and windtunnel provided results that matched the real world environment, enabling it to relentlessly pursue performance.

However, Red Bull has openly talked about having correlation issues ahead of 2017, something which seems to have been created by overall increase in the width of the cars - up from 1800mm to 2000mm - and the increase in tyre width - up from 245mm to 305mm and 325mm to 405mm, at the front and rear respectively.

This is the first time since 1998 that the cars have been proportioned like this and, while it’s not an oversight by any stretch of the imagination, the changes are such that there is no longer a wealth of data to fall back on. 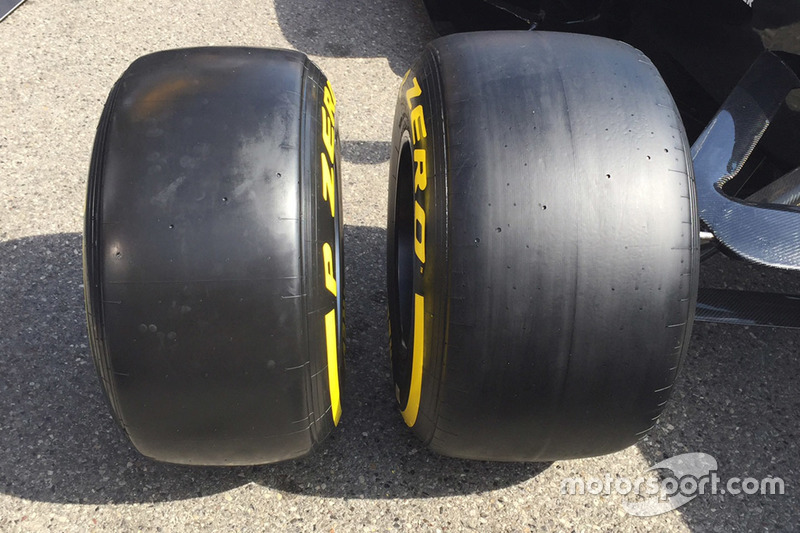 Tyres are still one of the enigmatic elements of car design, with a trade-off between what is done for aerodynamic and mechanical purposes muddying the waters. Clearly the switch to wider tyres is visually appealing to the fans but it comes with an aerodynamic compromise that the designers have to overcome.

From a grip perspective the contact patch has only grown by a few percent, even though the tyres are 25% wider. Of course, this changes the behaviour of the tyre, making life interesting for the drivers as they lean on the tyre for performance.

The three teams that tested the 2017 tyres – Ferrari, Mercedes and Red Bull – should have benefited in their understanding by running mule cars last year, but the data became less relevant when the FIA issued a clarification about suspension systems over the winter.

Although Red Bull insists it was unlikely to have run the complicated suspension system it wanted to because of weight reasons, it is clear it was chasing a certain aerodynamic platform.

We do know though that, to achieve its design philosophy, the team had to create a very stable platform, creating hugely energetic and precise aero structures that do their bidding from the front of the car all the way to the rear.

The most famous of these is the Y250 vortex - created at the juncture of the front wing’s neutral section and the flapped region, used to define how flow moves down the car, while reducing the aerodynamic impact the front tyres have on other surfaces.

If the concept of this year’s car was designed around a suspension that was effectively outlawed by the suspension clarification, it meant Red Bull would no longer be able to control the chassis as effectively as it would like.

Potentially this would open up the way for too much roll and pitch in transient conditions, and it would certainly have less dynamic control of heave: the overall compression of the chassis as load builds and dissipates, all of which adds up to more tyre deformation and aerodynamic instability.

What changed in Spain? 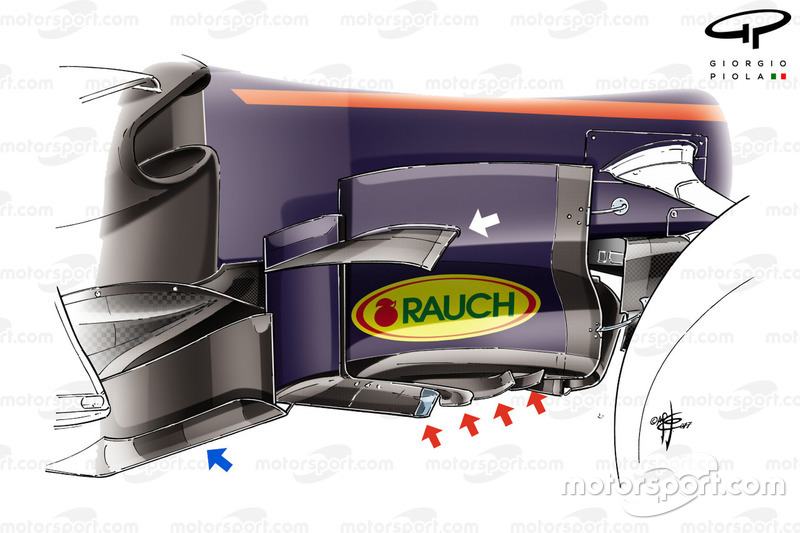 The update introduced at the Spanish GP centred around the rectification of the area between the front wheels and the sidepods, with new bargeboards mounted on the RB13 of both drivers.

Geometrically the main vertical bargeboards are relatively similar but we now find a horizontal guide vane placed midway up their surface (white arrow), whilst the footplate is now divided into several surfaces (red arrows) as the team looks to break up any turbulence created by the front tyre and use it to drive the floor and diffuser more effectively.

This clearly shows a concentration by the team on dealing with the issue of the wake generated by the front tyre, especially in transient conditions, with the drivers remarking how much better the car reacts to inputs at low to mid speed situations. 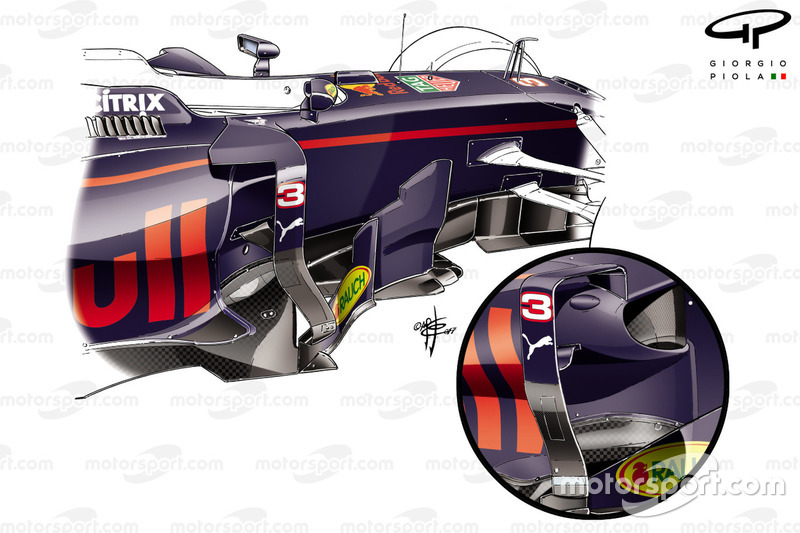 Having introduced the wedge shaped airflow conditioners, pictured above, earlier in the season - which changed the way in which air moves around and over the sidepod - the team made further revisions in Spain (below). 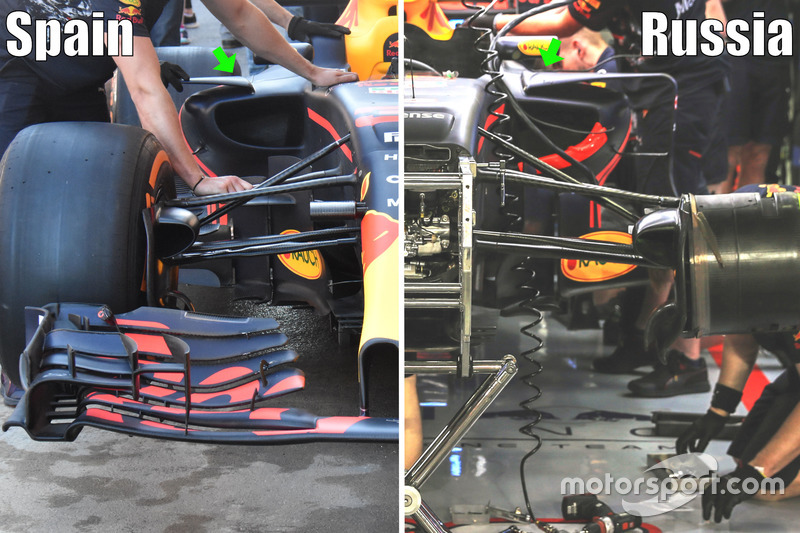 The wedge extension, which reaches over the upper surface of the sidepod, has been reduced in width by around 10cm, moving it away from the side of the cockpit and providing the sidepod with the type of freedom that was originally intended.

The sidepod's inlets may have also been treated to some small geometric revisions, although seeing so with the naked eye is difficult.

However, it’s understood that some internal repackaging to improve flow through the car has commenced, too.