Good morning. Welcome to the morning after a Belgian Grand Prix that started with a big bang for Nico Hulkenberg, Fernando Alonso and Charles Leclerc, and ended with Lewis Hamilton’s Ferrari “tricks” remark that rustled some feathers.

If you missed any of the news or action from a wild weekend in Belgium, here is your F1 Debrief from all that happened. Plenty to talk about, so let’s go! 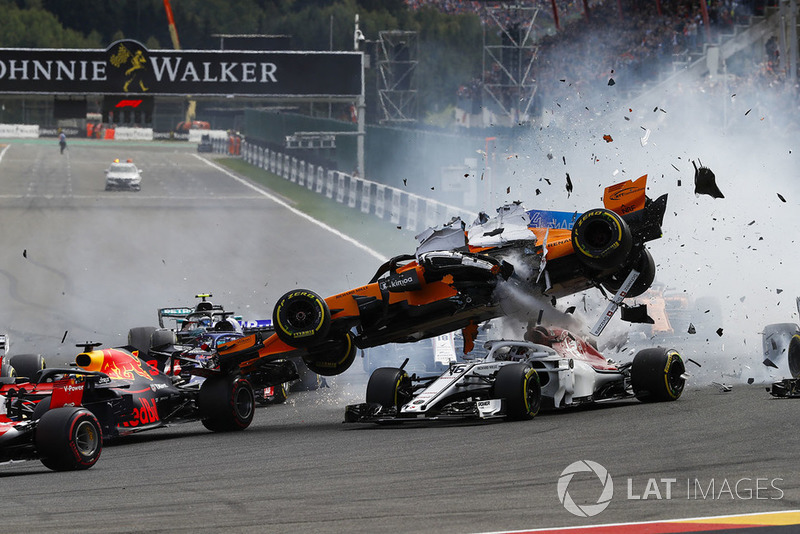 McLaren’s Fernando Alonso says he can’t understand how Nico Hulkenberg got his braking point so wrong for the opening corner at Spa, which caused a spectacular first corner crash.

Alonso's car was pitched into the back – and over the top – of Charles Leclerc's Sauber, after Hulkenberg hit him from behind when the Renault driver missed his braking point for the La Source hairpin.

In an incident that reminded many people of the start crash that earned a race ban for Romain Grosjean in 2012, Alonso said he was baffled by what Hulkenberg did.

Hulkenberg owned up to the shunt being his fault. This time, however, he escaped with a 10-place grid penalty for Monza and three points on his license.

The FIA reasoned that the penalty points system was created in the wake of the Grosjean ban, which is why the punishment didn’t go further this time. 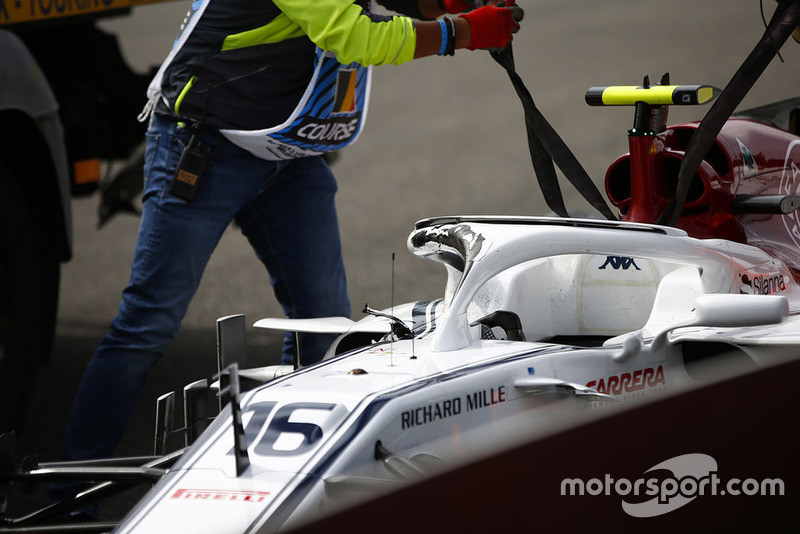 Charles Leclerc said he felt “lucky” after seeing the damage to his Sauber’s halo caused by Alonso crashing down on top of his car.

The halo was introduced this season, to mixed opinion, to improve driver safety. Photos of the accident clearly show Alonso’s right-front tyre make contact with the device, leaving black marks along the right-hand side.

Leclerc said: “I don't know how it would have ended up without it, but looking at it, I'm happy it was there. I've been lucky on this one.

“Looking at the halo, it's not looking good.” 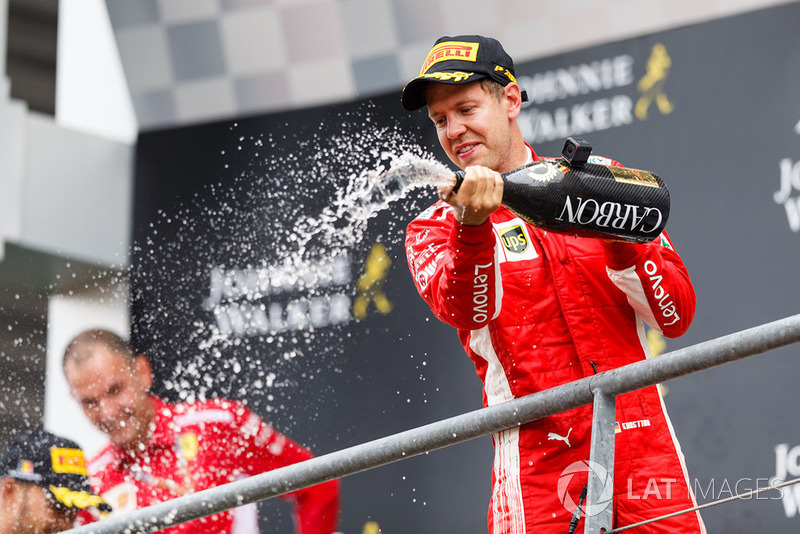 Sebastian Vettel, Ferrari celebrates with the champagne on the podium

Ferrari’s Sebastian Vettel took a much-needed victory in Spa, after he drafted past title rival and pole-man Lewis Hamilton on the Kemmel Straight on the opening lap.

He scored a dominant victory, despite the safety car for the first corner crash and Hamilton closing right up behind him after their pitstops.

Vettel’s 52nd victory now puts him third in the all-time winners list, and eclipsed Alain Prost’s tally – with whom he was previously tied.

After the race Vettel paid tribute to the new engine, that helped him out-power Hamilton as F1 hits its most power-dependant tracks.

He said: “Very happy with how the start went – Turn 1, which was crucial to set everything up – and then the timing was right and for sure we had a new engine this weekend, which gave us a little bit more power. And I’d like to think also a little bit more help and boost down the straight.” 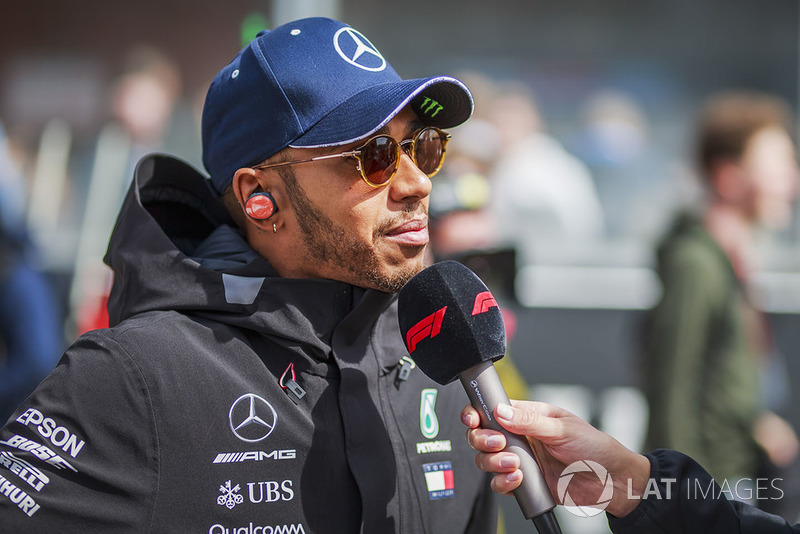 In contrast, Hamilton was anything but impressed with Vettel’s clear power advantage this weekend.

Speaking immediately after the race in parc ferme, Hamilton suggested Ferrari was aided by “a few trick things on the car”.

He went on to clarify his statement in the post-race press conference, stating he didn’t mean that anything untoward was going on, while the FIA’s Charlie Whiting said he was “amused” by the remark.

“They're doing a good job at the moment, and Mercedes have got to try and counter that, haven't they?” 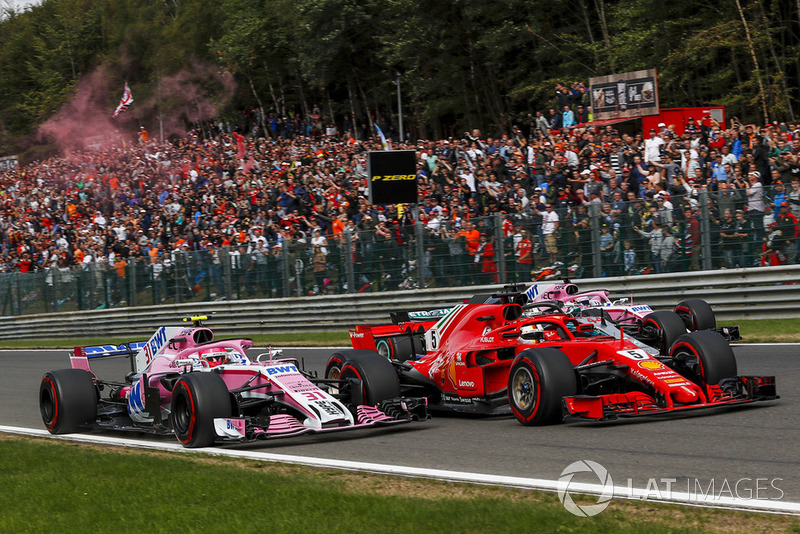 After almost vanishing from the Formula 1 grid, the renamed Racing Point Force India put on a show to be proud of in Spa. After a superb qualifying performance to lock out the second row in tricky weather conditions, Esteban Ocon almost led the race in the dramatic opening lap.

Ocon got an enormous double tow off Vettel and Hamilton on the Kemmel Straight, and drew alongside them into the braking zone at Les Combes, where he wisely bailed out.

Although this allowed teammate Sergio Perez to sweep past him, they went on to finish fifth and sixth respectively.

Having had the 'old' team’s constructors’ points wiped for 2018, the result meant the ‘new’ team leapfrogged Williams into ninth place at its first attempt.

Although everyone was pleased to see Force India survive, rival team principal Gunther Steiner of Haas F1 is still not happy about the prize money that the new entry will have access to on an immediate basis.