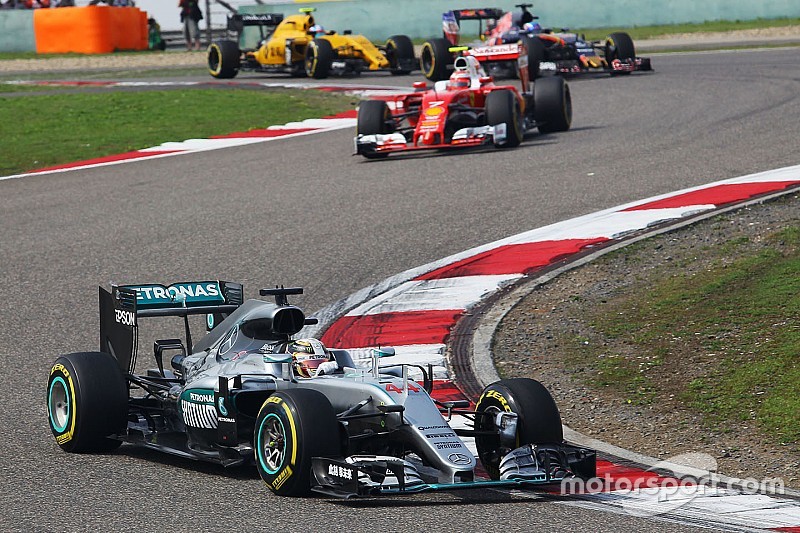 Mercedes motorsport boss Toto Wolff believes Formula 1 is making a mistake in pushing on with changing the rules for next year, following an exciting start to 2016.

A convergence of performance for the third year of F1's turbo hybrid regulations, allied to the flexibility of strategy choice, has thrown up some early season thrills so far this year.

Plus, progress made in both power and downforce levels has meant that cars are now as quick over a single lap as they have ever been.

That background has prompted debate in the paddock about whether or not F1 will benefit from having faster cars next year, especially because there is a risk that the increase in downforce could hurt overtaking.

When asked after the Chinese Grand Prix why F1 was so keen to sell the idea of an overhaul for 2017, Wolff questioned if they were any positives to the new rules.

"There is nothing to sell on it," he said. "There is no selling proposition in those new regulations in my opinion.

"We should just leave it alone.

"And maybe speaking against ourselves because clearly we don't have the advantage we had last year, but the racing is great and will become even greater if we leave the regulations alone."

Mercedes has been the team to beat in the turbo rules era, so the German car manufacturer has a clear vested interest in trying to keep the regulations stable.

However, Wolff has pointed out that keeping rules unchanged does not help his team, as it allows others more scope to catch up.

He thinks that a fresh approach for 2017 will simply ensure that one of the big money teams becomes a dominant force.

"Even if it is uncomfortable for the commercial rights holder that we have been running away with lots of races and the two championships, the longer you keep regulations stable the more the performance is going to converge between everybody," he said. "And this is exactly what is happening now.

The revised aero regulations for 2017 are already in place, but teams still have until the end of this month to change things by majority vote if needed.

Although Wolff believes that F1 is better off not changing, he does not have much support elsewhere in the paddock – with other teams suspecting an overhaul will give them an opportunity to win again.

Wolff added: "Three great races in a row now. But are we capable of reacting quick enough and acknowledging that, and reverting to regulations which seem to be okay now. I don't know?

"We are going to change it. Somebody else or us is going to run away with the championship next year because it is in the regulations, and everything starts from the beginning.

"There will be more downforce which you won't see just on pure lap time, and less overtaking because the wake is much more extreme…"