Mercedes has not ruled out abandoning its ‘zero-pod’ concept as it faces a crunch decision on the future of its Formula 1 car after the Spanish Grand Prix.

The German car manufacturer is struggling to tame the porpoising problems that have beset the W13 since the start of the season and have left the squad unable to challenge Ferrari and Red Bull.

While the team continues to chase answers, it views the next F1 race at Barcelona as a key moment in defining its next steps.

For, having run at the track in pre-season testing with its standard sidepod launch spec, its running over the Spanish GP will give it a golden opportunity to compare the behaviour and potential of the different concepts.

And, with not much progress having been made so far this year, Mercedes thinks a call has to be made soon on whether to plough on with the ‘zero-pod’ solution or do something different.

Asked by Motorsport.com if it could rule out going back to the launch spec philosophy if Barcelona shows that’s the way to go, Wolff said: “Well I wouldn't discount anything, but we need to give all our people benefit of the doubt.

“They have produced great race cars in the past and we believe that this is the route to go. Barcelona is definitely going to be a point in time where we are able to correlate with what we saw in February and gather more data.

“I'm also annoyed about saying the same thing about gathering data and making experiments, but it's physics and not mystics, and therefore you have to unpick the data.” 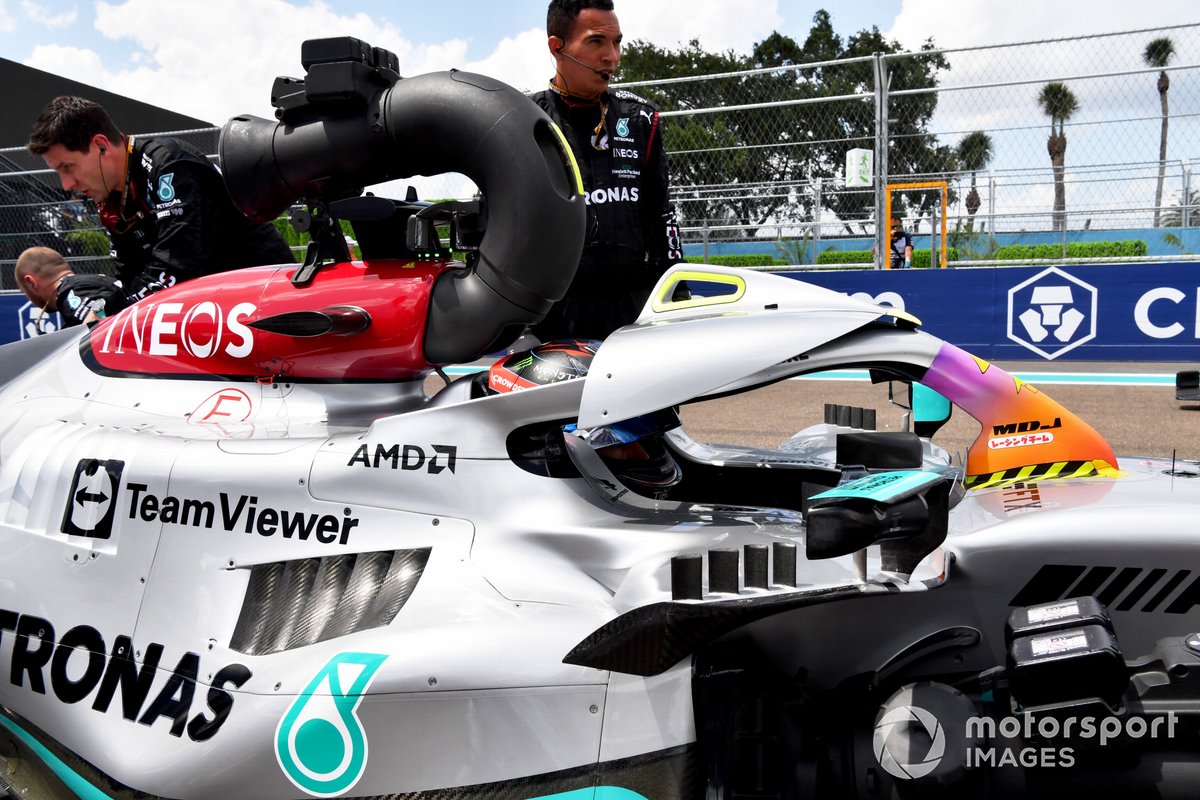 What Mercedes needs to get out of the Spanish GP weekend is the answer as to whether the theoretical performance benefits of the current ‘zero-pod’ solution can be attained in real life.

Having the data from running there, compared to testing, will give it the chance therefore to better understand if the old concept – which in theory produces less downforce – is actually better in the real world.

Focus is turning to the fact that Mercedes’ zero-pod concept may have delivered unintended consequences in exposing more of the floor – which has made the car increasingly sensitive to porpoising.

Wolff said: “If you walk through the grid, you can see that our floor edges stick out much wider than anybody else's. That gives it a different way, or much more scope, of possible instability.

“I think that's where our concept varies. Clearly the Barcelona launch car is much slower on paper, but we need to find out how we can make the current car work predictably for the drivers.”

While Mercedes does not yet know the answer to the question, Wolff is clear that after Barcelona the team will need to make a call on which direction it pursues in the future.

“I think we are still committed to the current concept - and you need to be,” he said. “If you don't believe, and you give the other one a 50 per cent chance, then you've got to switch now.

“We are faithful to the current concept. We are not looking at the lady next door to see if we like it more or not. It's still good.

“I would be asking ourselves to get an answer after Barcelona, because that's the real correlation we have. And by then, we will look at ourselves in the mirror and say, did we get it wrong or not?”

Rahal would “love” to give F1 star Vettel an IndyCar test