Nico Rosberg has been offered a new contract to keep him at Mercedes GP for at least four more years. 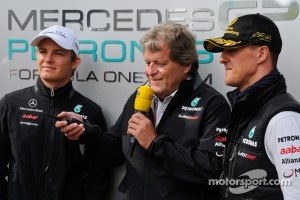 That is the claim on Sunday of the German Bild am Sonntag newspaper, adding that negotiations between the Brackley based team and the 26-year-old driver are "ongoing".

Rosberg's current contract runs until the end of next year. He says he is sure Mercedes will soon build him a winning car.

"When I see what's happening in the factory, I'm very confident," said the German.

Nico and Mercedes are interested in a very long term cooperation

Should Rosberg accept Mercedes' new offer, he would therefore not be available to switch to Ferrari or Red Bull when Felipe Massa and Mark Webber's current deals expire.

His teammate Michael Schumacher's contract also runs out next year.

The seven time world champion told Kleine Zeitung newspaper at Monza: "I will definitely be here next year, then we will see what happens."

Trulli confirmed for Team Lotus in 2012