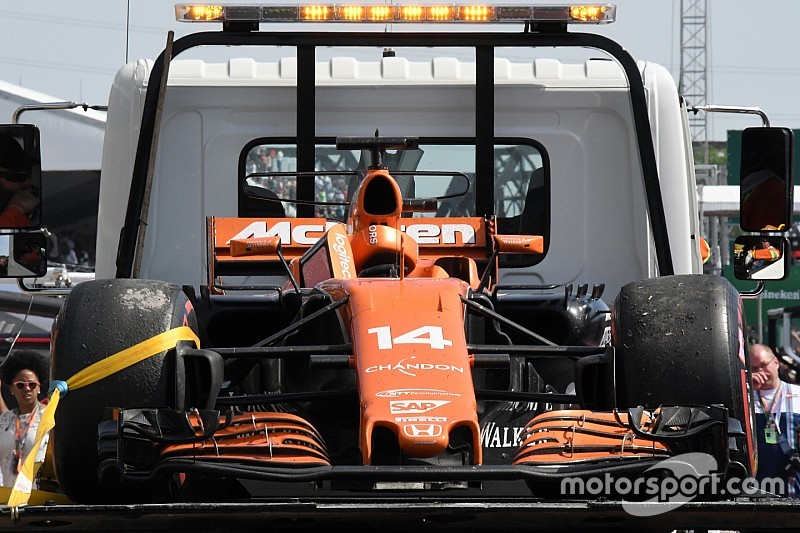 Eric Boullier said Honda's form is "absolutely not good enough" after an engine failure for Fernando Alonso in the Canadian GP robbed McLaren of its first Formula 1 point of 2017.

Alonso, who was competing in his first F1 grand prix since return from his maiden Indianapolis 500 outing, was running 10th with two laps to go when his engine lost oil pressure and he was forced to park his McLaren.

Despite running in the points, Alonso was scathing about Honda's performance, saying its straightline deficit to rival F1 teams in Canada was "dangerous".

It was a frustrating end to what has been a fractious weekend for the alliance after McLaren executive director Zak Brown's expressed "serious concerns" about Honda's capability in F1.

Speaking about the latest Honda failure, McLaren racing director Boullier said: "For the first time this season, running in 10th place within spitting distance of the flag, we dared to hope.

"OK, what we were daring to hope for were hardly rich pickings: a solitary world championship point for Fernando, who had driven superbly all afternoon, as he's driven superbly every race-day afternoon for the past two-and-a-half years.

"But, after so much toil and heartache, even that single point would have felt like a victory. And then came yet another gut-wrenching failure.

"It's difficult to find the right words to express our disappointment, our frustration and, yes, our sadness. So I'll say only this: it's simply, and absolutely, not good enough."

Honda chief Yusuke Hasegawa told Motorsport.com the data showed it was a failure of the internal combustion engine but it does not yet know the root cause.

That was Alonso's third ICE of the season, meaning his next one will be the last he can take before incurring penalties for further changes.

"If it has damaged the MGU-H (which is Alonso's fifth), there will be [penalties]," added Hasegawa. "But we are still investigating.

"From the data point of view, it looks like the damage is the ICE. We're very disappointed because we lost the opportunity to get a point.

"It is positive that even though this is a power circuit, we had a chance to get a point. But we were disappointed we missed the chance."

Hasegawa added that it was "clear there will be more penalties" given Alonso is set to move to his fourth ICE for race eight in Baku with 12 still to go.

Behind the Scenes F1: Spotlight on Lance Stroll as weekend turns from tension to relief