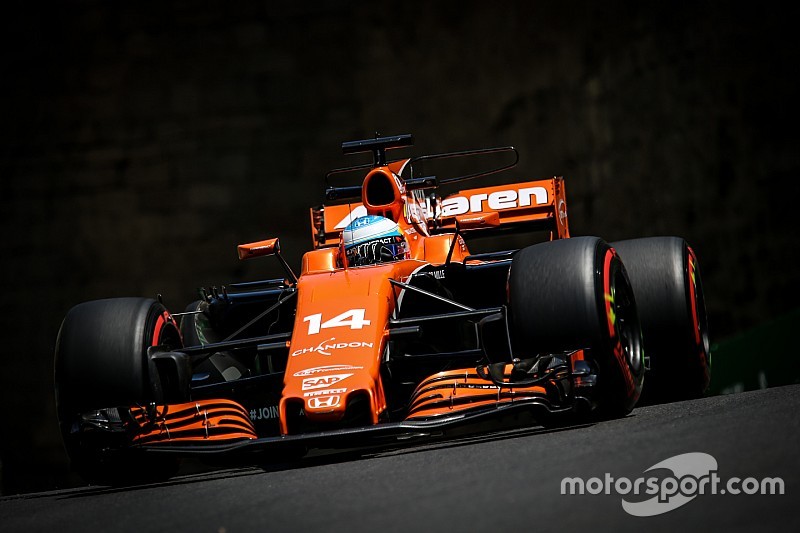 Honda tested an upgraded ‘Spec 3’ engine on Fernando Alonso’s car in practice for the Azerbaijan Grand Prix as part of its efforts to lift performance.

Although the Japanese car manufacturer had been coy about its plans for Baku ahead of track running, Motorsport.com has learned that Alonso’s McLaren was fitted with an updated internal combustion unit for the Friday sessions.

The new parts do not feature all of the upgrade elements that Honda has been working on over recent weeks, but the changes that were fitted were enough to leave Honda engineers encouraged.

For despite Alonso’s day ending early due to a gearbox problem, and him not getting a completely clean run in the yellow-flag-interrupted FP2, straightline speed data has produced some positive signs.

With Alonso and Stoffel Vandoorne running more similar downforce levels in FP2, the main speed trap in Baku showed the new power unit at 327km/h, with Vandoorne getting just up to 312 km/h with the ‘Spec 2’ version.

There remains plenty of room for improvement though, with the fastest speed recorded through the trap being 354 km/h by the Force India-Mercedes of Esteban Ocon.

Despite the clear benefit the ‘Spec 3’ engine has delivered, however, Alonso will revert to the old version of the power unit from Saturday.

The decision has been prompted by the fact that Alonso is already taking a 15-place grid drop for a new MGU-H and turbocharger, so Honda felt it made no sense to put extra mileage on the new unit unnecessarily on a weekend when McLaren will be at the back.

Switching power units will also allow Honda to check on any potential reliability issues that may have come up after initial running – with the ‘Spec 3’ then expected to return at the Austrian Grand Prix.