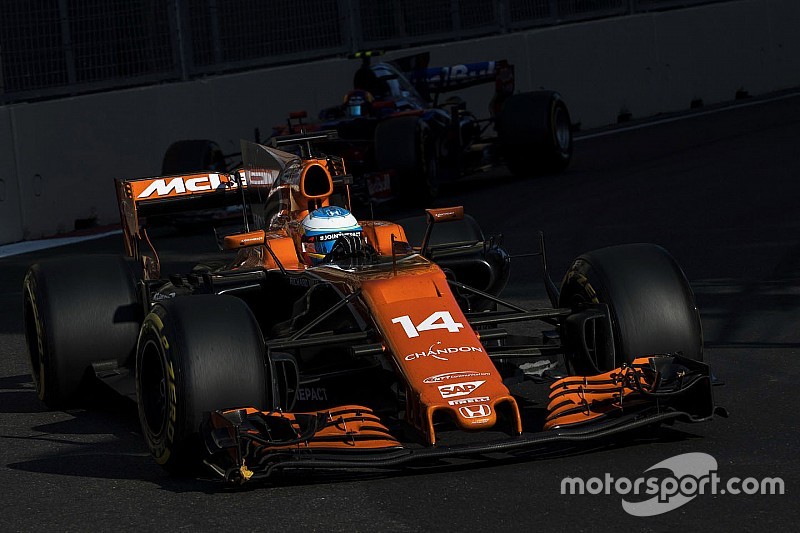 Yusuke Hasegawa said he was “very relieved” as Fernando Alonso scored McLaren-Honda’s first Formula 1 points of the 2017 season in the Azerbaijan Grand Prix.

The relationship between McLaren and engine supplier Honda has become increasingly strained in recent weeks, with the former frustrated by poor engine reliability and performance.

But the Baku weekend eased some of the pressure as the team got both cars to the finish for the first time in 2017, with Alonso taking advantage of a chaotic race to take ninth and Stoffel Vandoorne 12th.

When asked by Motorsport.com about the result, Honda chief Hasegawa said: “I’m very relieved that we could get points.

“The drivers made a very good job in a race of survival and as a result, we are very pleased about that. It’s very important [to get two cars to the finish].

“We didn’t have a big concern [regarding reliability], even if we’re were introducing a new engine and MGU-H.

“I’m very pleased we can show some development on reliability and because of that we can get points, which is very good.”

However, Hasegawa conceded Honda still has a long way to go to close the gap to its rivals.

“It’s very positive, but just with one race, I couldn’t say we are very confident,” he said. “From a performance point of view, just 13 cars finished, so it’s fair to say we’re not very fast.

“The gain [from the update] is not big enough to catch up the top runners but it is good progress.

“McLaren are not very excited because it’s not a huge upgrade to catch up the top runners but of course they are pleased. It’s important we can show them we have some progress.

“Although we didn’t achieve the complete target of our goal [to match its rivals].”

Honda brought one ‘spec 3’ engine to Baku, running it on Alonso’s car on Friday before removing it to check for damage following a gearbox failure.

The Japanese manufacturer believes the unit has emerged unscathed, but further checks will be made at Sakura this week.

Honda reckons its upgraded ‘spec 3’ engine delivered more than two or three tenths of a second worth of performance at Baku, matching data predicted by its dynos back at base.

Hasegawa said he hopes to have two ‘spec 3’ units ready to run for the next race in Austria, though he is unsure if Honda will have enough time to manufacture spares.

“We had a gearbox failure and we had some over-revs,” said Hasegawa. “We didn’t see any issues, but we will check the engine in Sakura again.

“It should be alright so we expect to introduce spec 3 for both engines.

Insight: What is the secret to picking your way through F1 Safety Car chaos?