F1 Halo can withstand “weight of a London bus” – Allison 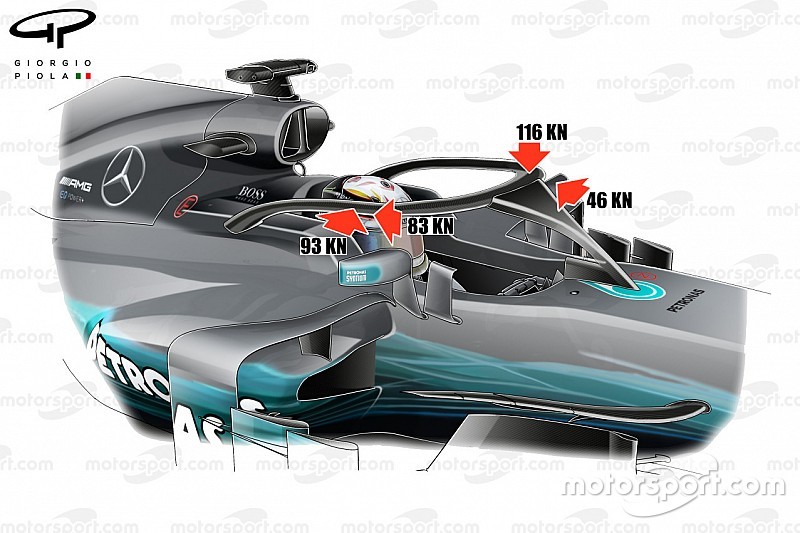 Adapting the chassis to take the device, which will be introduced for the first time this season, has proven to be difficult.

Speaking in a video released by the Mercedes F1 team, Allison said adopting the halo had been "a significant challenge" for his outfit.

"This is not a light piece of work, it is several kilograms of titanium that needs to be put in the car," he said. "There are changes that we needed to do to accommodate it to ensure the overall car would still stay below the weight limit.

"It's also not light because it takes really high loads. We had to strengthen the design of the chassis so it would be able to take roughly the weight of a London double decker bus sitting on top of the halo.

"We needed to make sure it would be strong enough to withstand the type of event it was designed to protect the driver against."

Allison said he expected halo to evolve in the coming years as teams look to minimise the aerodynamic impact while also improving the aesthetics.

"This round tube is quite bad aerodynamically so we're all permitted to modify the halo in a way which will be individual for each team because we're permitted to fit an aerodynamic fairing around it, which gives us a certain amount of scope to mitigate the effect it has on the aerodynamics of the car," he said.

"We also make sure it is designed so that it doesn't damage the behaviour of the rear wing.

"Nothing in F1 stands still for long. We will all be taking this first go and trying to improve it, trying to make sure the safety gets better but also the aesthetics.

"It's a bit of an acquired taste and we're still acquiring it and I'm sure everyone else is too.

"But I'm sure there are things we can do in coming seasons to make it also look nicer in the car.

"The imperative to look after the driver safety and our desire to give us cars that are going to set the pulse racing aesthetically will see us continue to develop this concept in the seasons to come."

When Ron Dennis took over the McLaren F1 team