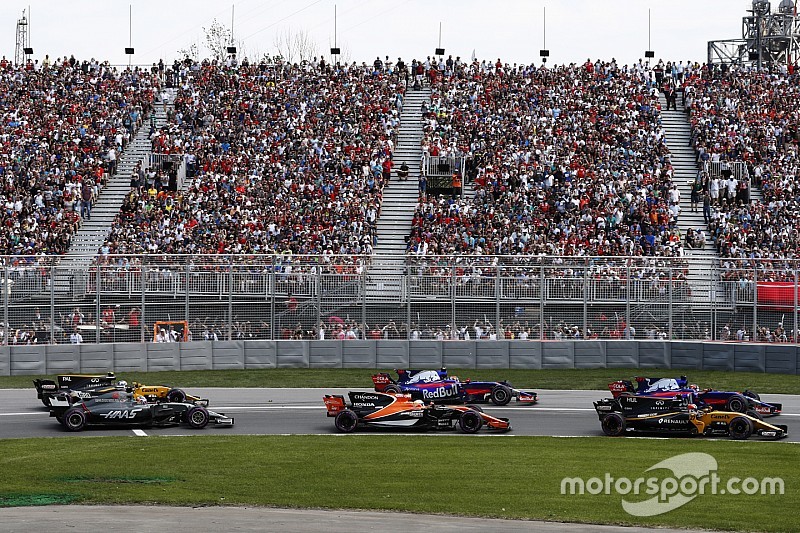 Romain Grosjean labelled Carlos Sainz's move at the start of the Canadian Grand Prix as "pretty dangerous" after the duo collided after Turn 2.

Sainz crashed heavily into Felipe Massa and then into the wall at Turn 3 after losing control of his Toro Rosso when he made contact with the Haas of Grosjean on the exit of Turn 2.

The Spaniard appeared not to see Grosjean on his side and touched wheels with the Frenchman.

Both men have been summoned by the race stewards, who are investigating the accident.

"There's not much to say. I was on the inside, Carlos was on the outside and then he turned twice to the right," Grosjean told Motorsport.com. "First I went on the grass, and I managed to come back on track and he hit me a second time.

"It's pretty dangerous to me. Luckily there wasn't much more happening in Turn 3 because it could have been pretty bad."

Sainz argued that Grosjean was in his blind spot and insisted he had no idea the Haas car was there.

"I got a decent start. I went around the outside of Fernando [Alonso] in Turn 2," Sainz explained. "I was just trying to find a way past into Turn 3.

"I never realised a Haas was in my dead angle in the mirror and we collided and I was simply a passenger into Felipe, probably the most unfortunate guy out there today apart from Romain and myself.

"Exiting Turn 2 I checked the mirrors, I saw the Renault and another guy two or three car lengths behind and I didn't [take] them in consideration when I was attacking Fernando and suddenly I had Romain there."

The Toro Rosso driver said that, even in hindsight, there was no way he could have avoided the incident.

"It's unfortunate because it's an incident that, if I look back now, there's actually nothing I could have done differently because when I checked my mirrors I never saw Romain on the right side," he said.

While Sainz retired on the spot, Grosjean went on to score a point by finishing 10th, having done almost the entire race with a set of supersoft tyres he'd switched to when he pitted after the crash

"It was doing 69 laps on the same set of tyres, which is pretty strange for a supersoft," Grosjean added. "We made it. I wasn't sure at the beginning but it was actually fine in the end."