Lewis Hamilton won the Brazilian Grand Prix at Interlagos in Sao Paulo on Sunday, storming through the field from 10th and passing title rival Max Verstappen for the lead with 12 laps to go.

Red Bull’s Verstappen passed the Mercedes of polesitter Valtteri Bottas at the first corner to lead, as Hamilton rose through the field from 10th on the grid.

After two attempts to pass Verstappen at Turn 4, including one time when Verstappen braked so late that he ran both cars off the track, Hamilton made the move stick at his third attempt to score a famous victory for Mercedes on a troubled weekend when he was disqualified after qualifying.

How the Brazilian Grand Prix unfolded

From pole position Bottas led Verstappen on the charge to Turn 1, where Max dived down the inside to grab the lead as he eased Valtteri on to the dirt on the exit. Bottas then ran wide at Turn 4, allowing Perez up to second place.

Behind them, McLaren’s Lando Norris clashed wheels with a slow-starting Carlos Sainz (Ferrari) on the run to the first corner and sustained a left-rear puncture.

After his five-place grid penalty for an engine change, Hamilton vaulted up from 10th to seventh on the opening lap. He then passed Sebastian Vettel’s Aston Martin for sixth at the start of Lap 2, and Sainz there a lap later. By Lap 5, Hamilton was up to third after he passed the Ferrari of Charles Leclerc and Bottas then let him past immediately.

Yuki Tsunoda (AlphaTauri) clashed with Lance Stroll's Aston Martin at Turn 1 and required a new front wing, causing a safety car on Lap 6. The race resumed at the start of Lap 10 in the order Verstappen, Perez, Hamilton, Bottas, Leclerc and Sainz.

Mick Schumacher’s Haas clashed with Alfa’s Kimi Raikkonen, costing him his front wing and causing a virtual safety car. After debris was cleared, the racing resumed once more on Lap 14 with Verstappen holding a 1.5s lead over Perez, who had Hamilton right behind him.

Hamilton got DRS for the first time on Lap 17 and swept past Perez around the outside of Turn 1 a lap later but Perez repassed him, with DRS of his own, on the run to Turn 4.

Hamilton overtook Perez earlier on the next lap, which helped him make the move stick. He was 3.9s in arrears of Verstappen at this point.

Hamilton pitted early on Lap 27, so Verstappen covered him a lap later. Hamilton had to pass Daniel Ricciardo’s McLaren but closed to within 1.6s of Verstappen due to the undercut and set a sequence of fastest laps. Perez also pitted, allowing Bottas to lead.

Hamilton was on the verge of getting into Verstappen’s DRS range as the race went under virtual safety car again, due to Stroll losing part of his bargeboard on the start/finish straight, which allowed Bottas to get a cheap pitstop, moving him ahead of Perez.

Verstappen opted to stop again for more hard tyres on Lap 41, but got stuck behind a Williams as he left the pits. Bottas pitted a lap later from third, with Perez responding to that on the next tour.

Hamilton led Verstappen by 18s and pitted again on Lap 44, handing the lead back to Verstappen with a 2.7s gap between them, but with hard tyres that were three laps fresher.

Hamilton then pushed hard, setting fastest lap and cruising up to the rear wing of Verstappen. He got DRS on Lap 48 and tried to pass at Turn 4 but Verstappen braked incredibly late and forced them both wide and off the track, both cars clipping the grass as they rejoined. “That’s crazy,” said Lewis. 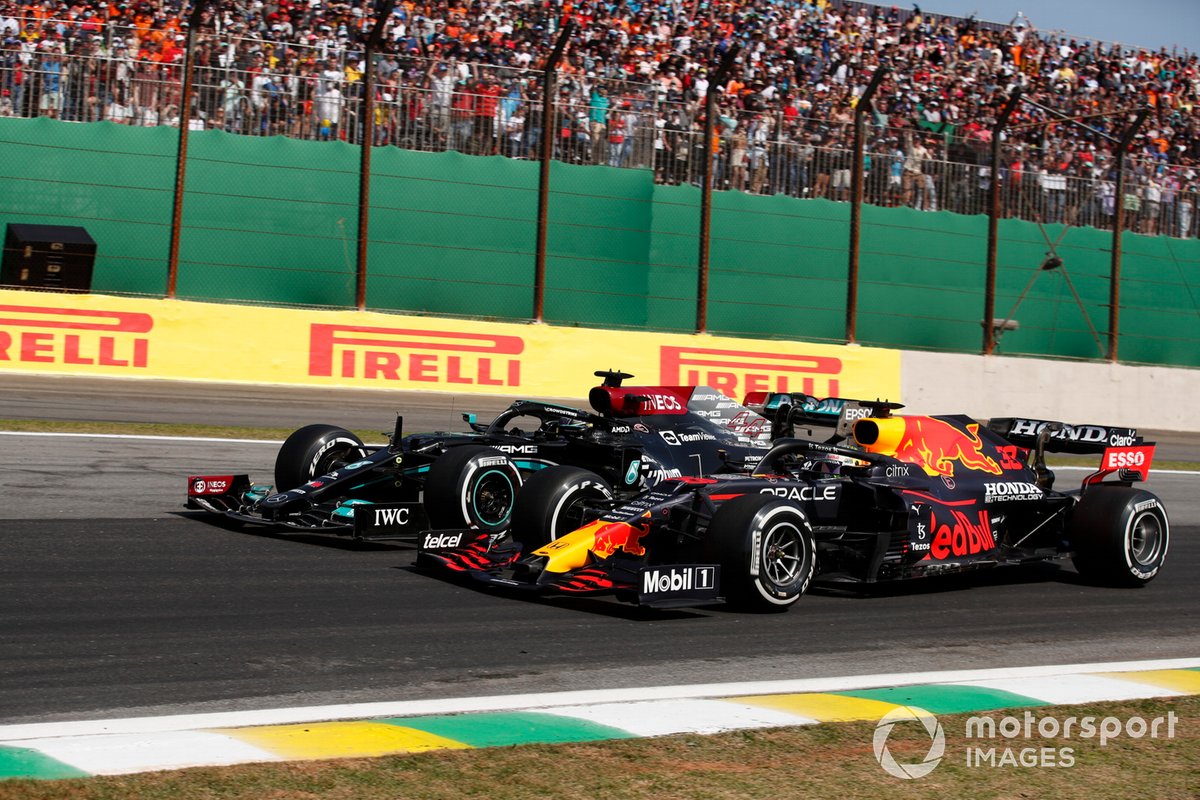 Hamilton regrouped for a couple of laps, then attacked again as the stewards reported no investigation was necessary. On Lap 58 Hamilton got another run into Turn 4, but wasn’t able to nose ahead this time.

A lap later, at the third attempt, Hamilton swept past him on the straight into Turn 4 and Verstappen could hold him off no longer. Verstappen was then shown a black and white flag for earlier weaving to try and break the tow.

Hamilton pulled away to win by 10.4s, with Verstappen taking an easy second ahead of Bottas and Perez. Red Bull pitted Perez on the last lap in a successful attempt to wrest fastest lap and the bonus point from Hamilton.

Leclerc and Sainz scored more solid points to maintain Ferrari’s advantage over McLaren in the constructors’ race, as Norris could only finish 10th and Ricciardo was forced out with a power unit issue.

The other points scorers were Gasly and the Alpines of Fernando Alonso and Esteban Ocon.

How a Mercedes "Achilles' heel" cost Verstappen in Hamilton's masterclass