Red Bull’s Max Verstappen was fastest on the opening day of Mexico City Grand Prix practice at Autodromo Hermanos Rodriguez on Friday, the 18th round of the 2021 Formula 1 World Championship.

Verstappen’s title rival Lewis Hamilton led a Mercedes 1-2 in Free Practice 1, but the Dutchman bounced back to top FP2 later in the afternoon – setting the quickest time of the day at 1m17.301s.

What happened in Free Practice 1?

On a dirty and dusty track, Ferrari’s Charles Leclerc and Red Bull’s Sergio Perez suffered spins entering Turn 16 inside the opening 12 minutes, both hitting the wall and damaging their rear wings.

Hamilton set the initial pace on soft tyres at 1m20.0s, but then ran off track at Turn 1 and rejoined on the wrong side of the bollard, a tenth clear of Verstappen who stayed out for a long run on the hard-compound rubber. Verstappen then improved to 1m19.826s but Hamilton trumped it with 1m19.781s, quicker by 0.045s.

Bottas took a new set of softs just after the halfway point, lowering the P1 time to 1m18.834s. Hamilton managed a 1m18.976s before Verstappen set the fastest lap so far at 1m18.464s, as Max ran softs for the first time.

Bottas worked down to 1m18.341s, the fastest time of the session that Hamilton got to within 0.076s of. Verstappen ended up third, 0.123s off the pace, ahead of Perez – who lost 20 minutes of the session while repairs were made.

Pierre Gasly was fourth for AlphaTauri, ahead of the Ferrari’s Carlos Sainz, Fernando Alonso (Alpine) and Leclerc. 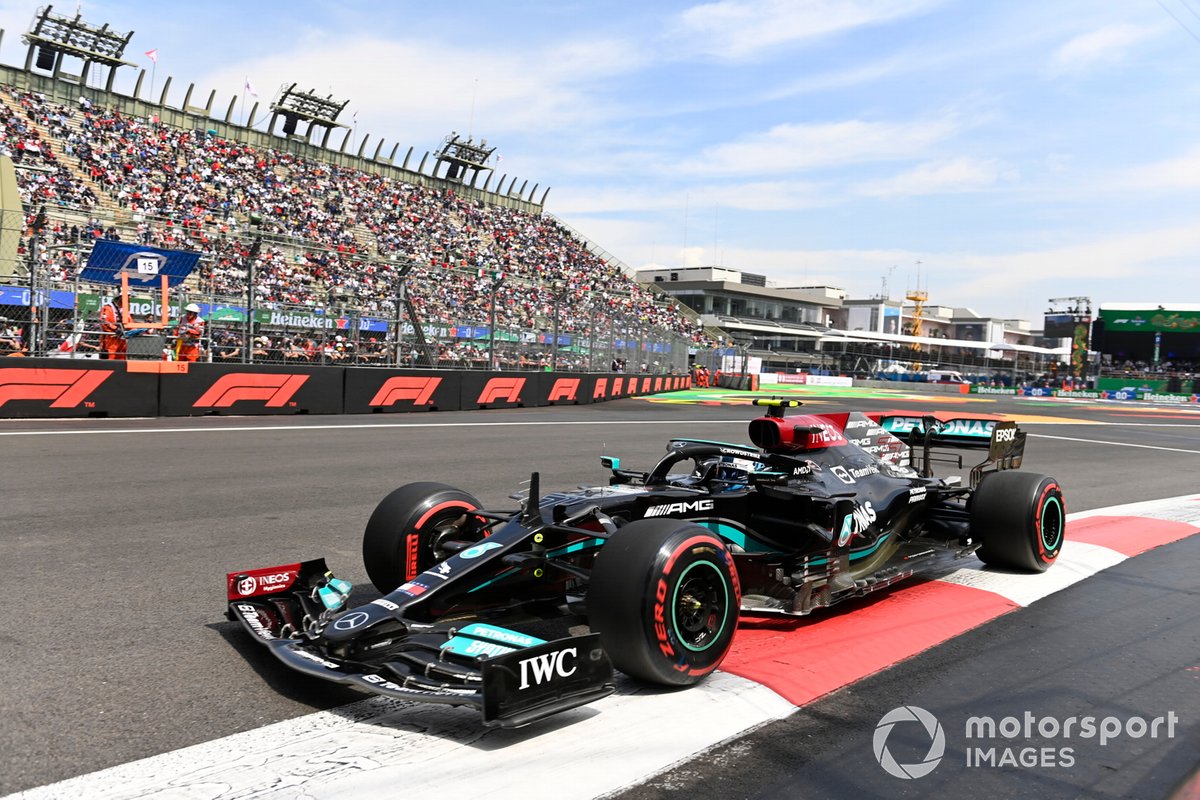 What happened in Free Practice 2?

His title rival Hamilton, running on hards, got mired in traffic and then had his best laptime deleted before locking up at Turn 1 and ruining his tyres. He was 5s off the pace after the first run.

Bottas was the first frontrunner on softs in this session, and took P2, 0.112s down on Verstappen’s medium time.

At the end of the hour, the order was Verstappen, Bottas, Hamilton and Perez. Sainz was best of the rest this time, just over a second off the pace, ahead of Gasly and Leclerc.

Williams’s George Russell suffered a gearbox issue and didn’t set a laptime, while Daniel Ricciardo also suffered a transmission issue on his McLaren. Nicholas Latifi overshot Turn 16 in his Williams. and continued.

Hamilton: Mercedes pace deficit in Mexico down to lack of downforce