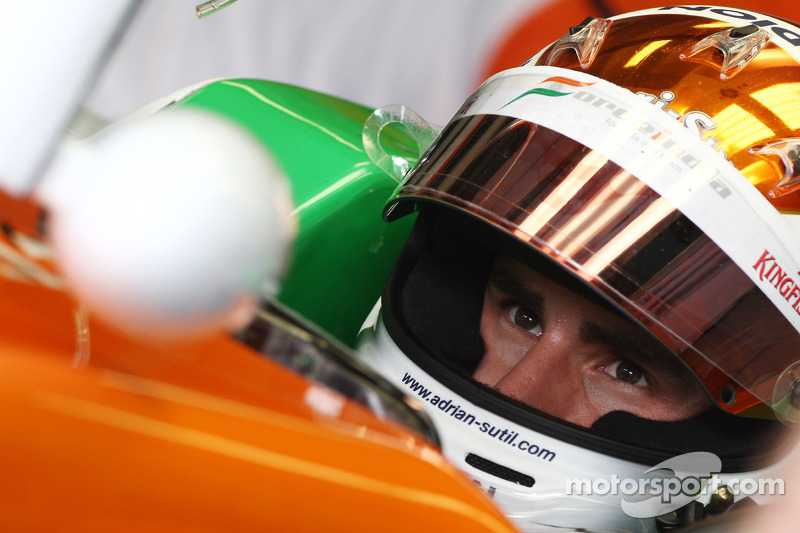 After a strong showing in Spa, Adrian looks forward to the high-speed challenge of Monza.

Adrian, what do you think of Monza?

"I enjoy it and I have good some memories there. It's where I had my best result two years ago when I qualified on the front row and finished fourth. It's a classic circuit, one of the old tracks, and you feel the history when you arrive there. And the Italian fans always give Monza a great atmosphere." 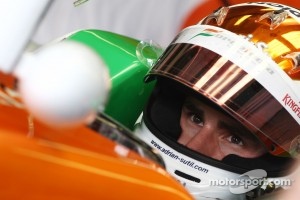 The team has been fast there in the past - do you expect that again?

"I think our car is more consistent on all tracks rather than just being strong on the quick circuits. Also, because everyone is now using DRS and KERS, the advantage of our straight-line speed is not so significant. It's still a fast car, but we were seventh in Hungary on a high downforce circuit and got the same result in Spa on a low downforce circuit. So it's a very consistent car now and I expect a good race at Monza."

There will be two race DRS zones - what do you think of that?

"This is very good for the racing because Monza has always been a track where it is difficult to overtake. Two zones gives us a chance to see lots of action this year. 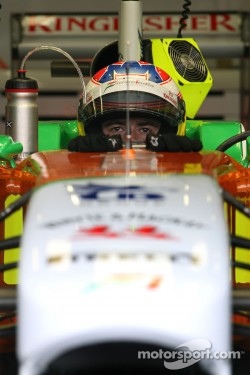 Paul, is it true you've never raced at Monza?

Yeah, in all my years of racing it's just one of those tracks where I've never raced. In fact, free practice last year was my first experience of the track.

What did you think of the place?

I loved the track. It's so fast but you also need to be aggressive and use the kerbs to get the laptime. And because it's so low downforce, you have to adapt and drive in a different way. You need to be very precise on the brakes too, because it's easy to lock a wheel and if you miss your braking by just a metre it can cost you a lot.

You have family in Italy - does that make it a special race for you?

You obviously treat every race with the same importance, but some races definitely feel a bit more special if you have an emotional connection. That's the case with Italy because I've got family living there and some Italian blood in me!

What are your expectations for the VJM04 at Monza?

I'm fairly optimistic that Monza will suit us. In the past we were very strong there, but we have a different philosophy now and the car has worked well on all circuits. It's going to be another close midfield fight but I believe we can come away with some points.

"Looking back on the last three races I am very pleased with the performances we have shown. Three strong points finishes on the trot have earned us 20 points and taken us a step closer to sixth place in the constructors' championship. It's a clear sign that we are delivering as a team on all levels and our season is now gathering some real momentum.

I particularly enjoyed the last race in Spa where the racing was excellent. I felt Adrian's seventh place was a fair reflection of our pace and a good recovery after our difficult qualifying session. At the same time we were fortunate because both cars picked up quite a lot of damage during the first corner and were lucky to finish.

The target now is to get both drivers in the points and I'm hopeful Monza will give us a chance to do that. The VJM04 worked well at Spa and the drivers were happy with the balance in low downforce trim. That's a good sign for Monza where we take another step down on the downforce levels.

Italy in September is a wonderful place to visit and is a great venue for a motor racing. There is a great tradition at Monza which, along with the passionate tifosi, helps make this one of the most enjoyable races of the season."

All F1 teams have to make special preparations for Monza to deal with the high-speed nature of the Italian track, and that means preparing a bespoke low downforce aero package. Circuit Engineering Director, Dominic Harlow, explains how Force India prepares for the fastest race of the season.

Dominic, how different is the aerodynamic package for Monza?

"Monza always requires a new rear wing. You run about 80 - 85% of your maximum downforce and there's a similar reduction of drag to about 75% of our total. The efficiency of the car goes up a little bit at those levels. Coupled with that, this is the first time that we've gone there with DRS."

When did you do the wind tunnel work for Monza, given the summer shutdown must have affected your schedules?

"It was at the end of June and beginning of July that we started to look at it. We test mostly at the higher downforce levels and probably spent a week or so just on Monza. The parts would have been released about eight weeks ago. Had we not had the shutdown, we would have turned that around a bit faster."

There are two independent DRS zones for the race - the start/finish straight and between the second Lesmo and Ascari. Did you expect that?

"It's interesting that the FIA hasn't set it before and after the Parabolica, on the basis that you might catch someone, maintain a minimum gap in the Parabolica, and then be able to make a pass on the pit straight. I guess they reasoned that was possible already and overtaking into Parabolica would be very difficult, so they've tried it in the other area for perhaps a larger laptime advantage for the trailing car. They are very rigorous in the method they apply to determine the zone and it seems to be working well."

With the Monza wing the DRS gain is less, but any extra speed must be useful?

"Yes, the effect will be quite a bit smaller, because the amount of downforce the wing is generating is less. You've got 80% of the maximum downforce on the car, but the reduction comes nearly all from the wings. Given that the wings are roughly 30% each of the overall load, with the rest coming from the floor, it cuts quite a lot of their authority."

We always look at rear wings at Monza, but how much does the front change?

"You've got to balance the downforce, so we reduce the capability of the front wing accordingly. Also, Monza is not a track that demands a forward aero balance because you want a reasonable amount of braking stability and entry stability, so we tend to run a little bit more rearwards and therefore less front wing. It's fairly easy to achieve that with a flap change."

We've seen recently that the car has been competitive on all kinds of tracks. Do you think you will still have an edge at Monza over the teams you are usually fighting against?

"I would hope that we've still got the upper hand. I think we've got nothing to fear, but equally there's no reason to be more bullish than anywhere else. Get it right and you'll go well, get it wrong and it's easy to mess up."

Our team partner, Whyte & Mackay, makers of Scotch whisky, offer their recommendations for a week in Monza.

There are lots of great hotels in the Lombardy region where Monza is situated. The main city of Milan is only a short distance away with luxurious venues such as the Hotel De la Ville, which is one of the most popular in the region due to its relaxed English Aristocrat feel.

A little closer to the circuit is the Best Western Hotel on the outskirts of Milan (just 7 km from Monza). Built from the ruins of a 1960s factory it's light, airy and comfortable.

If you want to be within walking distance of Monza, check into Hotel Trezzo. You'll find a great restaurant there called La Cantina, which even boasts its own wine cave.

Milan's Armani Cafe on via Croce Rossa has everything you would expect from the global fashion brand. White, clean, chic and discreet, it's a great place to start your evening with a delicious range of cocktails.

If you head away from the tourist trail towards via Vigevano you'll find Cape Town bar. Open daily from 7am to 2am it's famous for its Martinis and is a friendly place to spend an evening.

Voted 'the world's hippest restaurant chain' by Vogue magazine, Nobu in Milan is certainly worth a visit. Renowned the world over as the eatery for the hottest celebrities, this Japanese restaurant is great for a light lunch or dinner.

If it's regional cooking you're after then try a laid back supper in the Pane e Acqua located in Milan's Centro Storico neighbourhood.

For a sumptuous and educational brunch visit the Design Cafe in Milan's Modern Design Museum. Its popular menu, devised by top chef Carlo Cracco, is a big hit so be sure to book your table.

Let's introduce Force India's trackside aero expert, Bill Pearson, who joined the team in 2009 and travels to every race.

Sum up your job in three words...

Being a smaller team there is more opportunity to take responsibility and make a contribution to the performance of the car.

Is aerodynamics as complicated as it looks?

Have the team given you a nickname yet?

Several! 'Billy whiz' is one of them, but 'Billy brakes' appear to be the most popular.

Who would you invite to your fantasy dinner party?

Seeing VJM03 hit the track and race for points from the start. It was the first Force India car where I had a real input to the design.

How many men could stand on a front wing before it breaks?

At a guess you could get four men on there before something actually snaps.

Do you have any superstitions?

Not really, but I hate sitting on the left side of planes. Checking in online is a must - especially for long-haul…

Favourite venue on the calendar and why?

Montreal: it's always a good race and the people really make us feel welcome.

If you had one wish, what would it be?

To be rich enough to run my own F1 team!

Do you have any hidden talents?

Your most embarrassing moment?

Accidentally pressing the wrong radio button. I went straight through to the driver whilst he was on a fast lap! Not my finest moment.

Renault Sport optimistic ahead of Italian GP at Monza