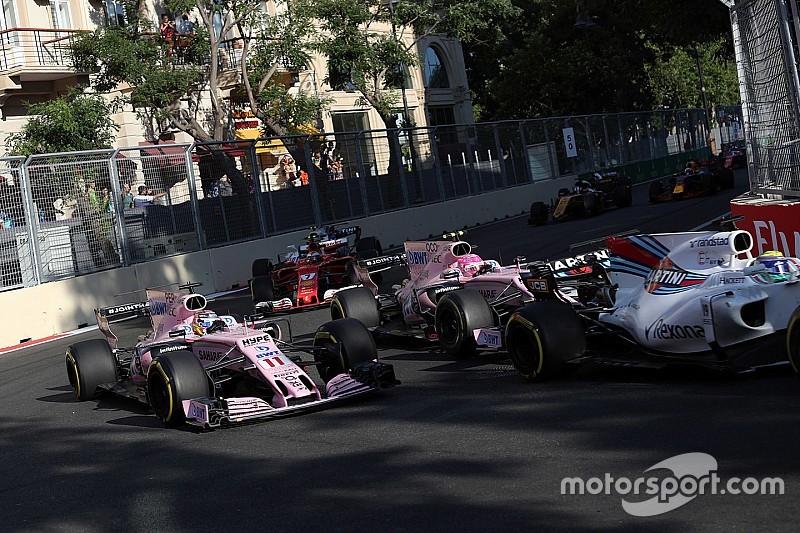 Esteban Ocon's clashes with Sergio Perez are more the result of the Frenchman's lack of experience in Formula 1 than a sign of growing tension between the drivers, reckon his Force India team.

Ocon was left frustrated in Canada when Perez did not move over for him as they fought for a podium finish, and then was further angered by a robust defence from the Mexican near the end of the race.

The pair then came to blows in the recent Azerbaijan Grand Prix when they collided after the second safety car period, damaging both cars and costing them the chance of a top-three finish.

Force India's COO Otmar Szafnauer sees no cause for concern about mounting trouble between his pairing, though, and thinks that things will calm down as Ocon gets more experience under his belt.

Asked by Motorsport.com about why the relationship between Ocon and Perez has become so tense in Canada and Baku, Szafnauer said: "I don't think we had trouble in Canada, it was nothing to do with the drivers.

"But in Baku definitely, I just think Esteban needs a bit more experience. He is young, he hasn't done a lot of F1 races, and every time this kind of thins happens you learn.

Szafnauer believes that the relationship between Ocon and Perez is working well, and denies that the Mexican has become more aggressive because he is up against a young charger.

"He [Perez] is handling himself no differently to when he was here with Hulkenberg. He is a great racing car driver, and the more Esteban pushes him, the more he will raise his level. I think he will get stronger

He added: "Esteban is very professional, easy to get on with, and the relationship is good between them. We just have to make sure that they don't run into each other, it is that simple.

"I've raced myself and I know when you are in the car, things like this are normal. You don't want to give way and if something like that happens, you do get fired up."