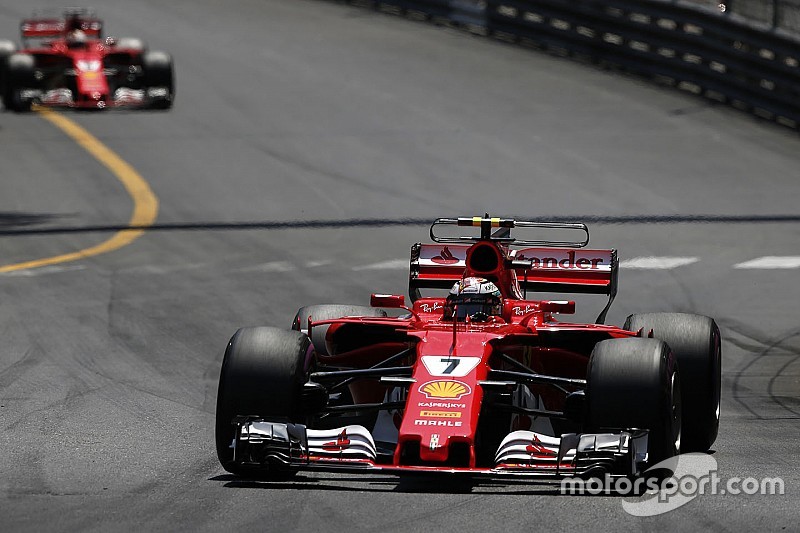 Lewis Hamilton says it is clear that Ferrari has chosen Sebastian Vettel as its number one driver in the battle for the 2017 Formula 1 world championship.

Vettel jumped teammate Kimi Raikkonen during the pitstops to win the Monaco Grand Prix, after being left out for five more laps than the Finn when they took their only tyre changes in the race.

While Raikkonen was very disappointed with the result, Vettel denied that the strategy was part of any plan from Ferrari to switch the order of its cars to benefit his title hopes, but Hamilton suggested otherwise.

"It's clear to me that Ferrari have chosen their number one driver, so they're going to be pushing everything to make sure Sebastian will get the maximum on all of his weekends," said Hamilton, who trails the German by 25 points after recovering from 13th on the grid to seventh after a tough weekend.

"With the strategy, it's very hard for the leading car to get jumped by the second car unless the team decide to favour the other car, so that's very clear."

Mercedes asked Hamilton's teammate Valtteri Bottas to move aside to allow him to fight for victory in Bahrain earlier this year, and the Finn admitted that his "job" in the Spanish Grand Prix was to hold up Vettel when his pit strategy put him ahead of the Ferrari on track.

But when Hamilton was asked if his observation about Ferrari favouring Vettel meant he would be asking Mercedes for similar treatment, he dismissed the idea.

"I haven't spoken to the team, and I don't really plan to," Hamilton added. "Valtteri's doing a great job, I don't currently feel that we have to favour one over the other.

"It's really important that we work as a team more than anything, as we have been. There might be some things along the way positioning wise which, at some stage, become valuable.

"But who knows, it might go the other way – I might need to give Valtteri the upper hand.

"I really have no idea. We've just got to make sure we're ahead of them so we don't need to be in the same scenario that they're in today."