For the past few years, the royal park of Monza has provided the backdrop for Formula 1’s farewell to Europe and that is again this case this weekend, because after the Italian Grand Prix, the circus heads off around the world for the final six rounds of the 2011 championship. The contrast could not be more marked, from Italy’s sixty second GP, all bar one held at Monza, to the modern face of Formula 1, with a venue that has never staged a race - India, to those only visited once or twice before – Korea and Abu Dhabi. If the Italian venue lacks the giant facilities and razzle dazzle of the more modern venues, it certainly makes up for it with the challenge presented by the actual race track. This will be the fastest Grand Prix of the year, both in terms of the average speed over the 53 laps and the top speed achieved by the cars down the straight. 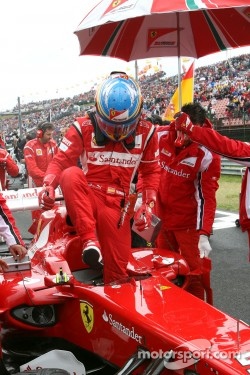 For Scuderia Ferrari, it has always been a key date on the calendar, being its home race, a short drive down the autostrada from the Maranello headquarters. The Prancing Horse is the only team to have been on parade for every edition of this race, winning eighteen of them. So a key date yes, but a critical one, no: contrary to what some pundits have been saying, this weekend is not the Last Chance Saloon for the Scuderia’s season.

Last year’s Italian GP winner Fernando Alonso sums up the scenario well: “The championship situation is even more difficult after Spa, in that there is one race less to go and the gap to the leaders has grown a bit more,” admitted the Spaniard. “We have to be realistic but we will never give up: we did not give up in the past and we will not do it now. It is easy to maintain a high level of motivation, because we tackle every Grand Prix wanting and trying to win. Winning an individual Grand Prix is in itself very special and something we all want to do, regardless of the championship situation. There is further motivation in the Constructors’ championship where there are more possibilities and we will try and do well right up to the last moment.” The man from Oviedo has been racing in Formula 1 at Monza since 2001, “when I started at the back with Minardi,” he recalls. “The first time you drive Monza in a Formula 1 car, hitting 350 km/h or more for the first time in your life is a very special feeling. 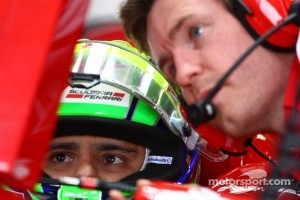 Then, in 2006 we were leading the championship with Michael Schumacher behind us, so we arrived in Monza as the opponent of Ferrari. The tifosi naturally tried to put me under pressure and I also had a penalty after qualifying for blocking another driver, my actual team-mate Felipe. I started tenth, had an engine problem when lying third and the crowds in the grandstands at Turn 1 were very excited about this and the fact Michael was leading the race. It was an interesting experience… One year later I took pole, fastest race lap and the win with McLaren. It was my first win at this historic track, even if of course the tifosi were not very happy. Then in 2010, a very different feeling from the same result: pole, fastest lap and race win, but this time with Ferrari. I especially enjoyed being on the podium seeing about 20 thousand people in front of me on the track with Ferrari flags: a difficult image to forget.”

The Spaniard’s team-mate, Felipe Massa, was also on the futuristic podium hanging over the pit lane last year, after finishing third and he is equally enthusiastic about the venue. “Racing in Monza is a fantastic experience for us, as the home Grand Prix for Ferrari,” reckons the Brazilian. “When you go there and see all the tifosi dressed completely in red, you can really feel their love of speed, of Ferrari and of competition. Racing here is therefore nothing but a pleasure for me. It is a very emotional weekend and I am always happy to be there. With its long straights, Monza is the circuit where we reach the highest speed we see all year. Drivers love speed and that is an extra motivation to race at Monza, when you have speed in the blood.” 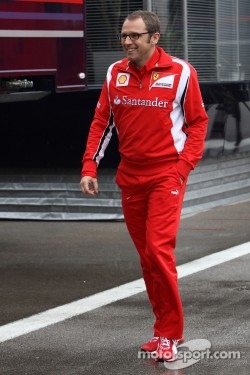 For the first time this season, the FIA has instigated two completely separate zones where DRS can be activated to reduce the drag effect from the rear wing: one is on the pit straight after the Parabolica corner and the other runs from the second Lesmo corner to the Ascari chicane. Although the cars will in any case run with small wings because of the high speed nature of the circuit, this is bound to increase the passing opportunities, so that we could well witness a return to the great slipstreaming battles that thrilled crowds here in the past, before aerodynamics were as sophisticated as today: because of the slipstreaming phenomenon, Monza still holds the record for the closest ever Grand Prix finish from 1971, when Peter Gethin’s BRM took the flag just one hundredth of a second ahead of Ronnie Peterson’s March. “I think for sure DRS will create a lot of overtaking, as indeed it has done at every race this year,” maintains Massa. “It will be very interesting for the fans, while for the drivers, it will mean even more work and having to concentrate precisely on what is going on, because you will have to work out not only when to try and pass, but also to defend yourself from attack.”

All teams will run their cars in a special “Monza configuration” with the smallest wings of the year and in addition, Scuderia Ferrari’s 150º Italias will also feature updates to the bodywork, as well as the team will continue to optimize the compromise between engine power and aerodynamic downforce in the exhaust system. As usual at Monza, it’s a delicate balance between getting as much power as possible from an engine that runs at almost maximum revs for about three quarters of the lap and getting just the right aero balance for the long straights, also by optimizing the gear ratios. In addition, a car needs good stability under braking and an ability to ride the high kerbs, to save precious fractions of a second, especially for qualifying. It is a challenge both our drivers are relishing: “I definitely expect to have a competitive car and after finishing third last year I hope to do even better this time,” says Felipe. “Another win this year? Why not,” says Fernando. “Monza is a unique track with a unique set-up which involves its own wings and aero set-up so everyone is effectively back to zero. I expect we will have a very competitive car and Ferrari will be very strong, boosted by the fact we really want to win at home.”