Pirelli’s head office in Milan today was the scene of the fourth FOTA Fans Forum, the third this year, run by the Formula 1 teams association with a view to bringing the top level of motorsport closer to its fans. Previous forums have been held in London, Montreal and Woking. 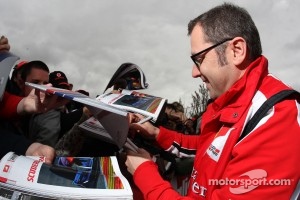 Stefano Domenicali was on the panel, alongside the engineers Giampaolo Dall’Ara (Sauber) and Niccolo Petrucci (Toro Rosso,) along with drivers Jarno Trulli (Team Lotus) and Nico Rosberg (Mercedes) and Pirelli’s Director of Motorsport, Paul Hembrey.

“Events like these are very important and it was really interesting being able to talk directly to Formula 1 fans,” said the Ferrari Team Principal. “It is the best way to have a finger on the pulse of what they are thinking. For example, we must realise that the means of communication change at a very fast rate and, I have to say, it can be hard to keep up. This can lead to a widening communications gap, especially as far as the younger generation are concerned and this is a mistake that Formula 1 can ill afford to make.”

A hot topic of the debate was the high price of entrance tickets to the races, given the current economic situation in several European countries. “It is a very delicate and complex matter and one which we are paying a lot of attention to,” said Domenicali. “I say that, fully aware of the subject because Ferrari, as owner of the Mugello circuit, comes face to face with this situation when the circuit hosts important events like the MotoGP championship. There are no easy solutions, but given the important deadlines facing our sport in 2012, we absolutely have to keep this in mind.”