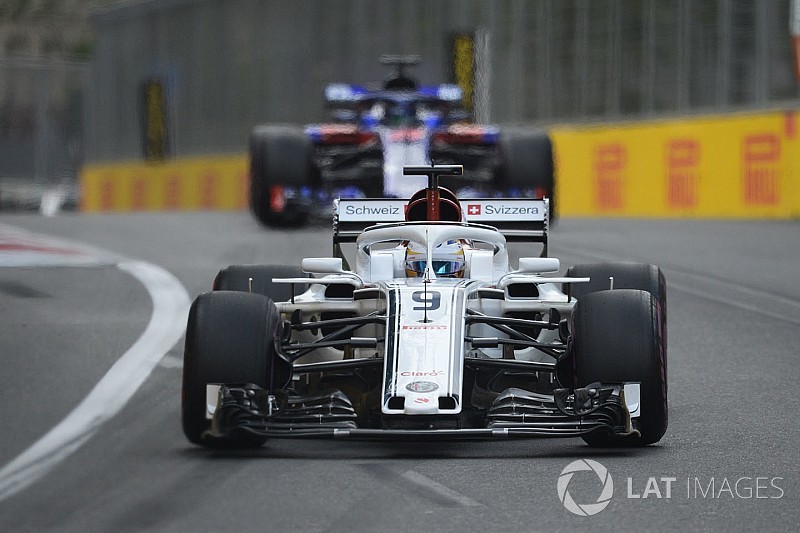 The F1 Commission will vote on Monday on proposals to improve overtaking in 2019 by modifying front wings – and there are still mixed views as to whether the changes should be adopted.

April 30th is the last date for changes to next year's technical regulations to be passed without requiring unanimity.

As previously reported, FOM and the FIA have been working together on ways to allow cars to follow each other more closely, with research conducted by a group led by F1 chief technical officer Pat Symonds.

Their focus has been on "outwashing" front wing elements designed to control the airflow over the front wheels, with research suggesting that they also had a detrimental effect on following cars.

No consensus on removing such endplate elements could be reached at a meeting of team technical bosses in Bahrain, and it was agreed that teams would conduct their own CFD research into the proposals, and then share it with the FIA.

The results have now been collated in the form of a report which will inform Monday's vote.

"The FIA gathered all the data from those teams that contributed, which was eight teams out of 10," said Williams chief technical officer Paddy Lowe.

"So they've analysed all of that and sent out a report yesterday. Then there's an e-vote on Monday.

"The conclusion of the FIA's work, in collaboration with FOM, was what the teams had analysed supported their proposal as being suitable and supporting their analysis that it would improve the ability of the cars to follow.

"It's the FIA and FOM working together, and they wanted to gain more confidence in their proposal by involving the teams, and I believe that's been achieved.

"I don't believe there were any teams' results which contradicted their own analysis. It's mostly about the front wing endplate."

Lowe made it clear that he's keen to see the changes go ahead.

"I think it all makes sense. We've got another three years of this formula, and if we don't make changes at this point, it becomes a bit pointless because there are a huge set of changes for 2021.

"So this is the time that F1 should act and act decisively for the good for the show."

Lowe sees the wing changes as potentially making a much greater contribution to improving racing in 2019 than the already confirmed 5kgs increase in the fuel allowance.

"Some of the chat around that [the fuel allowance] is about it improving the show and improving overtaking, which I honestly don't believe.

"To me it would be a great shame if the end result of all our efforts to improve the show for 2019 ended up just being a misplaced change of fuel level rather than doing some proper work."

However, some teams have still expressed doubts about the front wing proposals, hinting that they might not get passed on Monday despite the apparently positive results of the CFD research by the teams.

"I'm not sure it's mature enough," McLaren racing director Eric Boullier told Motorsport.com. "It's only been discussed for a couple of weeks.

"I would be surprised if it's agreed," said Red Bull team principal Christian Horner. "They're a snapshot of 2021, but taken in isolation.

"There are consequences that are detrimental, so better to leave things alone as they are for now, and then do a complete package for 2021 that encompasses everything."