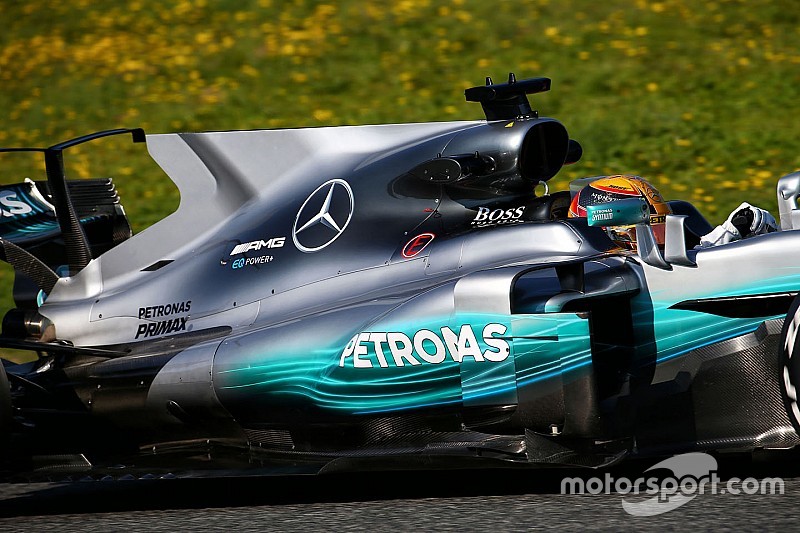 Formula 1’s newly-installed sporting boss Ross Brawn says he’d like to see the unpopular and unintended consequences of the new-for-2017 aerodynamic rules “ironed out” over time.

Speaking to Formula1.com in a video interview in Barcelona this week, Brawn admitted he’d like to see the cars' appearance to be “more pure” – while also admiring the performance jump they had made over the previous generation of machinery.

“With the new cars and new rules, we have to see how they perform and what effect that has,” said Brawn. “As a racing car, it looks more exciting. The proportions of the car are better.

“They’re much faster; pretty impressive performance. Drivers tell me they are physically challenging, which is what was wanted.

“As always with new regulations, there are few little hiccups. We’ve got the unpopular shark’s fin on the back. In time, I think we need to address those.

“Part of the objective of the new rules was to produce more exciting-looking cars, so we don’t want to spoil it with peripheral bits that take away from that. But that’s normal with new regs.”

When asked about the T-wings seen on some new designs, he added: “Those are all the consequences of new regulations, and not intended. So unintended consequences, over time, we need to iron out. And get the things looking a bit more pure.

“We also need to see, once the season starts with the tyres and rules we have now, how well the drivers can compete with each other. That’s an important element as well, and it’s an open point at the moment.

“From the car perspective, stability [of regulations] is important, so there won’t be any major changes there.”

No “rush” into removing DRS

Brawn added that he wants a deep investigation into the subject of overtaking, to reach a point in future where DRS – the artificial system that allows a following car to gain a speed advantage on straights over a rival – is no longer required.

“We have to look at the whole topic of overtaking in racing, and how the cars can follow and overtake each other,” he said. “I would prefer that to be achieved by a normal process, rather than enhanced by something like DRS.

“But DRS was a solution to a problem we had at the time. I don’t think we should rush into taking DRS off, but what I’d like to see is a better long-term solution to car design so we don’t need it.”

When asked what changes he would like to implement in his new role, he answered: “The process by which the rules were agreed.

“What I’d like to see in the future, where we want to play a part, is making sure the objectives are very clearly defined. If you’re going to make a regulation change, what’s the objective?

“And then it’s making sure we’re finding a process where those objectives are sure to be achieved.

“Within FOM, we’re going to have our own capacity to judge these things. Our small, specialist group of engineers will participate with the teams and help make sure we achieve those objectives; have a better process behind the regulations.”