The defending champion elected not to take part in the final shootout in Q3, knowing he will start from the back of the grid owing to a drop for exceeding his permitted parts count.

Nevertheless, his banker lap was so emphatic that he topped the session by six tenths of a second as a sloppy Sainz final flying lap meant the Spaniard failed to improve at the death.

Sergio Perez will join the Ferrari on the front row of the grid, while Leclerc will meet Verstappen as the pair are poised to line up in 13th and 14th.

Verstappen was a class apart after the first round of flying laps in the climax to qualifying, the Dutch ace romping to a 1m43.665s - the sole sub 1m44s lap of the weekend.

That gave him a mighty 0.632s in hand over Sainz, while Perez was third and another two tenths back before his lap was flagged for exceeding track limits at Raidillon. 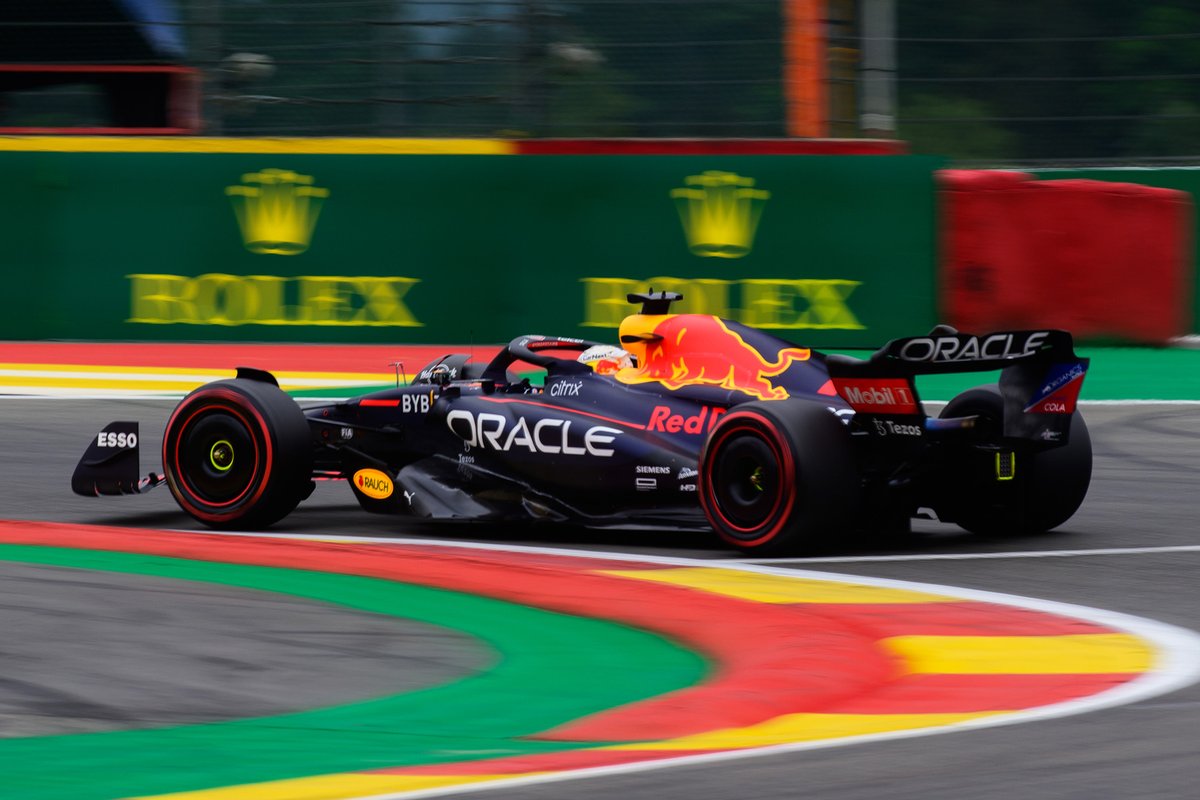 Leclerc, meanwhile, was fourth, having been initially sent out on a set of scrubbed softs.

While both Alpines, Mercedes, Norris and Albon were also released on used rubber, Ferrari admitted over team radio this was a mistake.

Team boss Mattia Binotto even appeared to intimate pointing a gun to his head on the pit wall after Leclerc crossed the line.

Leclerc then dived back out of the pits after his sole effort to just pick up Sainz out of La Source to tow his teammate down the long Kemmel Straight.

But the tactics proved in vain as Sainz missed his personal best first sector before clipping the gravel through Les Fanges to wind up on a 1m44.714s and duly failing to improve.

That left his earlier 1m44.297s as his best effort, however the British GP winner has no penalties to carry over to the grid to line up on first.

Perez similarly failed to improve at his second attempt, while Esteban Ocon (also destined to be sent to the back of the grid) pipped Alpine teammate Fernando Alonso for a team 5-6 result.

Lewis Hamilton led George Russell for seventh and eighth, the W13s running some 1.8s off Verstappen.

Mercedes appears to be on the back foot for what might have been its best shot at a race win in 2022 given Verstappen and Leclerc’s reprimand.

Alex Albon starred in Q3 as Williams made its straight-line speed count in the opening sector (Albon running fastest of everyone), as the Thai-Brit clocked ninth and is poised to line up in sixth.

Lando Norris, meanwhile, opted against a second flying lap and was 10th in Q1, but he too has penalties to serve. 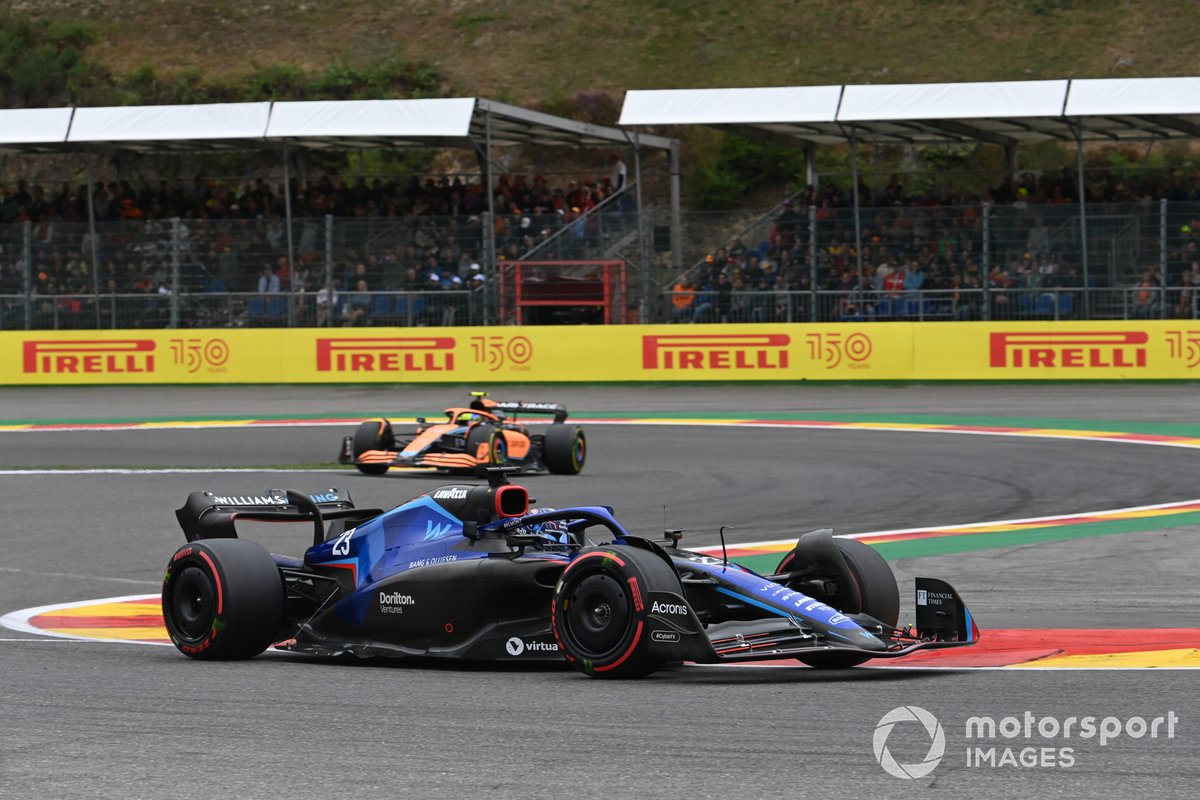 Albon’s late dash over the line in Q2 bumped Daniel Ricciardo out by 0.1s, although the departing McLaren driver is set to start in seventh place with grid penalties considered.

Ricciardo stayed in the garage initially to pin all his hopes on one flying lap. But with teammate Norris destined to start at the back of the grid, Ricciardo was given a tow by the Brit.

The McLarens worked together for the Kemmel Straight but even still the Australian ran slower than Norris’ likely unaided lap to sit in 10th before Albon improved over the line.

That relegated Ricciardo, where he was joined on the sidelines by AlphaTauri’s Pierre Gasly, Zhou Guanyu in the Alfa Romeo, Lance Stroll and Mick Schumacher, who ran 15th fastest.

Neither Red Bull required a second bite of the cherry and so remained in the garage, which left the door open for Leclerc to top Q2 late on by 0.15s courtesy of his 1m44.551s effort.

However, his banker had been only good enough for sixth – the Ferrari driver have clipped the grass in his “very strange” car before losing the back end through the Bus Stop chicane.

Perez ending Q2 only 0.07s adrift of Verstappen was a little flattered by him running fresh soft Pirellis while the defending champion plied his trade on a scrubbed set of tyres.

Sebastian Vettel was the first driver to miss out on a Q2 appearance, the retiring Aston Martin driver being knocked at in the first 18-minute session yet again.

The four-time champion crossed the line just 0.002s adrift of the cut-off, set by his effective protégé Schumacher in 15th after the Haas driver’s late improvement.

With Verstappen sitting pretty by 0.5s at the top of the leaderboard over Sainz after their banker laps, neither Red Bull nor Ferrari drivers opted for a second flying lap as they occupied the top four spots.

The remaining 15 cars, with Ocon then fifth, headed out with 3m30s to go and felt the benefit of track evolution as all those in the bottom five place began to improve.

Yuki Tsunoda had been 15th at the time and the first driver at risk, and the AlphaTauri driver did his chances no favour when he locked up massively into the Bus Stop chicane to abort the corner and left himself prey. He was duly bumped to 19th.

He was only faster than Valtteri Bottas, but the Alfa Romeo driver was already destined to start near the back of the grid owing to a 20-place penalty for component changes – much like Norris, Schumacher, Ocon, Zhou, Leclerc, and Verstappen.

As a result, it appears likely that despite his mistake, Tsunoda will start the race in 13th.

Kevin Magnussen was only 18th fastest, behind Nicholas Latifi in 17th – the Canadian’s Williams team-mate Albon using the low-downforce FW44 to smash the fast-opening sector to climb to sixth in Q1.

The start of qualifying had been delayed by 25 minutes, announced a quarter of an hour before the session began, owing to Les Fagnes barrier repairs prompted by a Porsche Supercup shunt.

F1 bullish it can escape previous ‘boom and bust’ cycles