F1 analysis: Ferrari is back! But is it really? 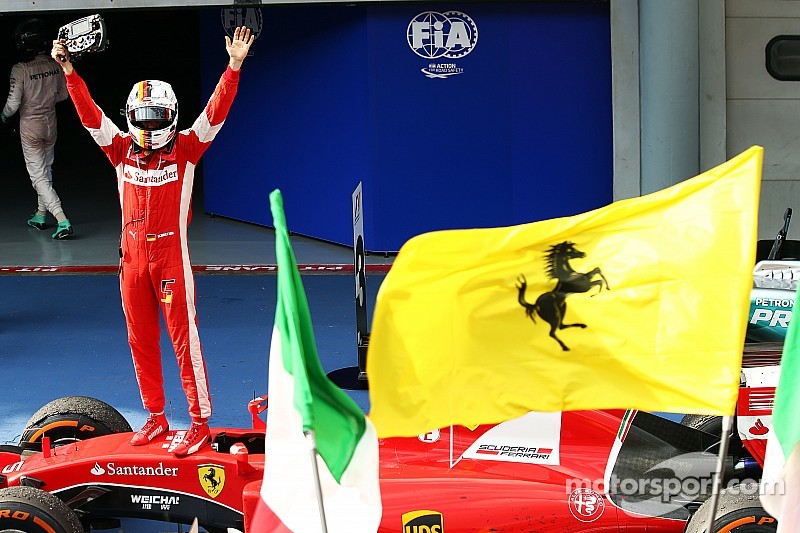 Sebastian Vettel gave Ferrari its first win in nearly two years at Sepang, and he beat the Mercedes on pure pace. But can the Scuderia keep it up in future? Kate Walker investigates...

The Malaysian Grand Prix was Ferrari's first win since the 2013 Spanish Grand Prix, and confirmed the wisdom of Sebastian Vettel's decision to leave the once dominant Red Bull for the red-suited Italians.

Not only did Vettel secure the victory of Fernando Alonso's dreams, but he managed to lap both of his former employer's cars in the process – a moment of sweet schadenfreude.

But on the quadruple-champion's slow-down lap the world TV feed broadcast a victory song, a triumphant "Ferrari's back!"

To those watching Sunday's race at Sepang International Circuit, the assured victory did not point to a more open championship, but rather to potential problems further down the line for the Italian racers.

First, the German racer's assured performance in the cockpit – it was an error-free afternoon from Ferrari's newest recruit, and a drive he should be rightly proud of.

Second, the team's decision to keep him out when almost everyone else pitted under the safety car proved to be the right strategic call – the first such move from the Scuderia in many, many moons, and one helped by others staying out and delaying the Mercedes duo.

The final factor – and the one which really raises question marks over the strength of Ferrari's renaissance – was the impressively low tyre degradation seen on both SF-15Ts, with Vettel and Kimi Raikkonen able to maintain pace on long runs on both the hard and medium compound.

Raikkonen may have been 53.8 seconds behind his teammate when he crossed the finish line in fourth place, but given the Finn's first-lap puncture and subsequent pitstop, it was an impressive recovery indeed.

By the time the top three finishers were standing on the Sepang podium, track temperatures had dropped to 55 degrees centigrade from a start temperature of 62 degrees.

That the Ferrari was able to maintain consistent pace over long runs in such conditions was a boon this weekend, but one which does not bode well for the cooler track temperatures found across the bulk of the calendar.

Can Ferrari win in lower temperatures?

Endurance in extreme temperatures implies a difficulty in getting heat into the tyres in cooler climes. The desert races of Bahrain and Abu Dhabi take place under twilight and night skies, and in 2014 the Sakhir race got underway with a track temperature of 28 degrees, while the Yas Marina start was 38 degrees on track.

The other hot race on the calendar – steamy Singapore – split the difference, with a track temp of 33 degrees when the lights went out.

The track conditions on offer in Malaysia this weekend were anything but typical, and it remains to be seen whether Ferrari will be able to repeat the low degradation, high performance rubber trick at any of the forthcoming races.

While the tyres themselves may have had a flukey role to play in Ferrari's return to the top step of the Formula 1 podium, the Scuderia looks like a completely different team from the one we saw when it was Alonso leading the charge.

Without taking anything away from the Spanish racer's impressive performances in uncompetitive equipment, Alonso is not a driver known for creating team harmony. His reputation is quite the opposite.

Vettel, on the other hand, may have struggled to harmonise with former teammate Mark Webber, but is roundly praised by everyone else he has worked with for being the ultimate team player.

He is the man who never forgets to thank his team in person (in addition to the de rigeur podium platitudes spoken by all), and who stays late alongside his mechanics when there is work to be done. In fact, he was even spotted visiting his old mechanics in the Red Bull Racing garage on Friday!

His arrival in Maranello will have been a breath of fresh air for a team used to opprobrium from its star performer, and there can be no underestimating the effect of a simple morale boost on team unity and performance.

Add to that the improvements to the Ferrari power unit and a car that looked to be competitive straight out of the box, and the Gestione Sportiva certainly looks to be in the mix this year.

But are they back on previously dominant form?

Probably not; Vettel's emotional Malaysian Grand Prix win was a collection of circumstances that saw Ferrari capitalise on every opportunity going, and not a clear statement that the SF-15T will threaten the W06 for the next 17 races.