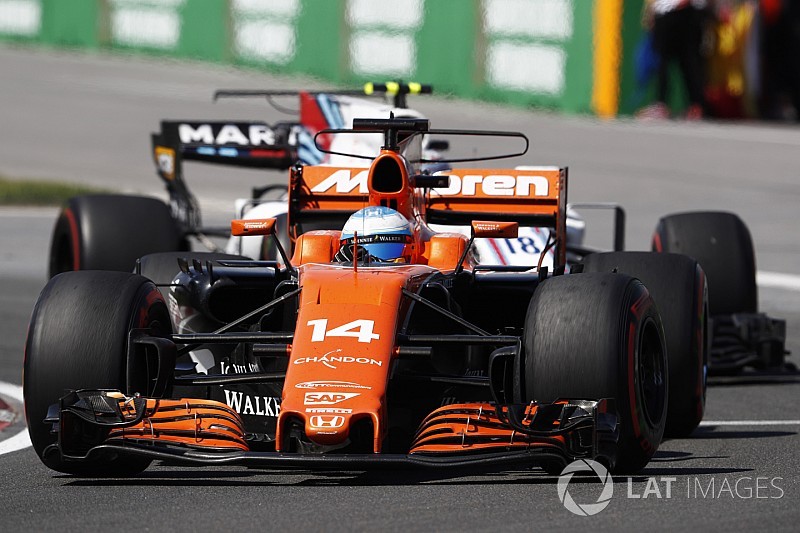 McLaren-Honda's straightline speed deficit to rival Formula 1 teams in the Canadian Grand Prix was "dangerous", according to Fernando Alonso.

Speed trap figures in Montreal on race day put Alonso 16mph down on the benchmark 213mph achieved by Sebastian Vettel's Ferrari, with the second McLaren of Stoffel Vandoorne faring better by reaching 205mph.

Alonso rose up the order by staying out until lap 42 of the 70-lap race on his first set of tyres, but found himself repeatedly overtaken by other cars before an apparent engine failure took him out of 10th place with two laps to go.

"The race itself was already hard enough given the lack of power," said Alonso. "They were passing us in the middle of the straights and sometimes it was even dangerous with such a speed difference."

With his car having already exceeded its maximum allowance of multiple power unit components - prompting a grid penalty for his Monaco GP stand-in Jenson Button a fortnight ago - Alonso is certain Sunday's failure will leave him at the back of the grid for the next race in Azerbaijan.

"It is not only that we lost a point today and we lost another race, we will start last in Baku because Jenson changed the power unit in Monaco and started last," he said.

"Here we lost a power unit and in Baku we will start last again. The situation is definitely not nice."

Alonso's teammate Stoffel Vandoorne briefly got up to ninth amid the incidents and early pitstops of the race's first quarter, before falling away to finish 14th.

"It was a difficult race but I think we more or less knew that before starting the race," said Vandoorne. "We saw that on the straights, and also the amount of fuel-saving we had to do today really hurt us.

"We were a bit of a sitting duck today. We don't have the power to defend. We have to invent some tricks to keep cars behind and then everything starts to become very difficult.

"When you're out there there's not much you can do. You can moan about it, OK. But in the end, I'm trying to get on with my job. I just hope there will be improvements soon so we can actually start racing with the others."

After his late retirement, Alonso surprised the crowd by climbing into a grandstand.

He explained that this was a spontaneous gesture that started with the idea of just throwing his gloves to fans.

"I hoped to give the gloves to the guys there but the grandstand was too far away so I thought it will not get there if I throw the gloves," said Alonso.

"So I thought I'd go up and throw the gloves, but once I was there I nearly couldn't leave. We have so much support from the fans here every time we come to Canada so I felt I should give something back."