Sebastien Buemi is not getting excited despite preparing to clock up a career milestone this weekend.

Blick newspaper points out that the 22-year-old Swiss, who debuted for his current team Toro Rosso as a teenager in 2009, will contest his fiftieth consecutive Grand Prix in Singapore.

He will therefore draw level with Luca Badoer and move ahead of the career tallies of predecessors including Christian Klien and Derek Daly, and even race winner Jean-Pierre Jabouille as well as Mike Hailwood.

And Buemi, with 27 points on his tally but no podiums, has already contested more Grands Prix than the famous Phil Hill, Mike Hawthorn and Francois Cevert. 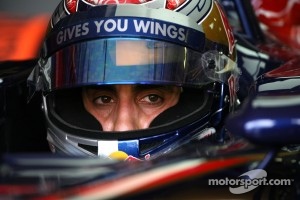 And if he completes a fourth season in 2012, he will pass the career tallies of Mark Blundell, Gilles Villeneuve, Alex Wurz, Stirling Moss, Jim Clark and even the great five time world champion Juan Manuel Fangio.

In total, 119 drivers in F1 history have started more than 50 Grands Prix.

In Formula One, the learning process never ends, you can always get better

But Buemi insists: "For me it is just a number; a stopover on the way to higher goals.

"In Formula One, the learning process never ends. You can always get better."

Buemi has scored points in 14 of his career races, and failed to finish 13 times.

Liuzzi not looking for HRT switch

Baku not worried about Miami F1 scheduling from 2022

In defence of Luca Badoer