Formula 1 is bracing itself to enter an unprecedented 'biosphere' lockdown in Abu Dhabi, as the sport adheres to the strictest COVID-19 rules that it has encountered in 2020.

The regulations are such that they will make it problematic for the currently-quarantined Lewis Hamilton to be able to compete in Abu Dhabi, even if he tests negative in the coming days.

On Monday, the entire F1 circus – apart from a handful of drivers and team VIPs travelling on private jets – will be flying from Bahrain to Abu Dhabi on 10 charter planes, amid tight restrictions.

The Abu Dhabi government’s COVID measures are so strict that access by road is currently blocked from its UAE neighbour Dubai, and special exceptions have been made to allow the grand prix to go ahead, following months of discussions between F1 and the authorities. 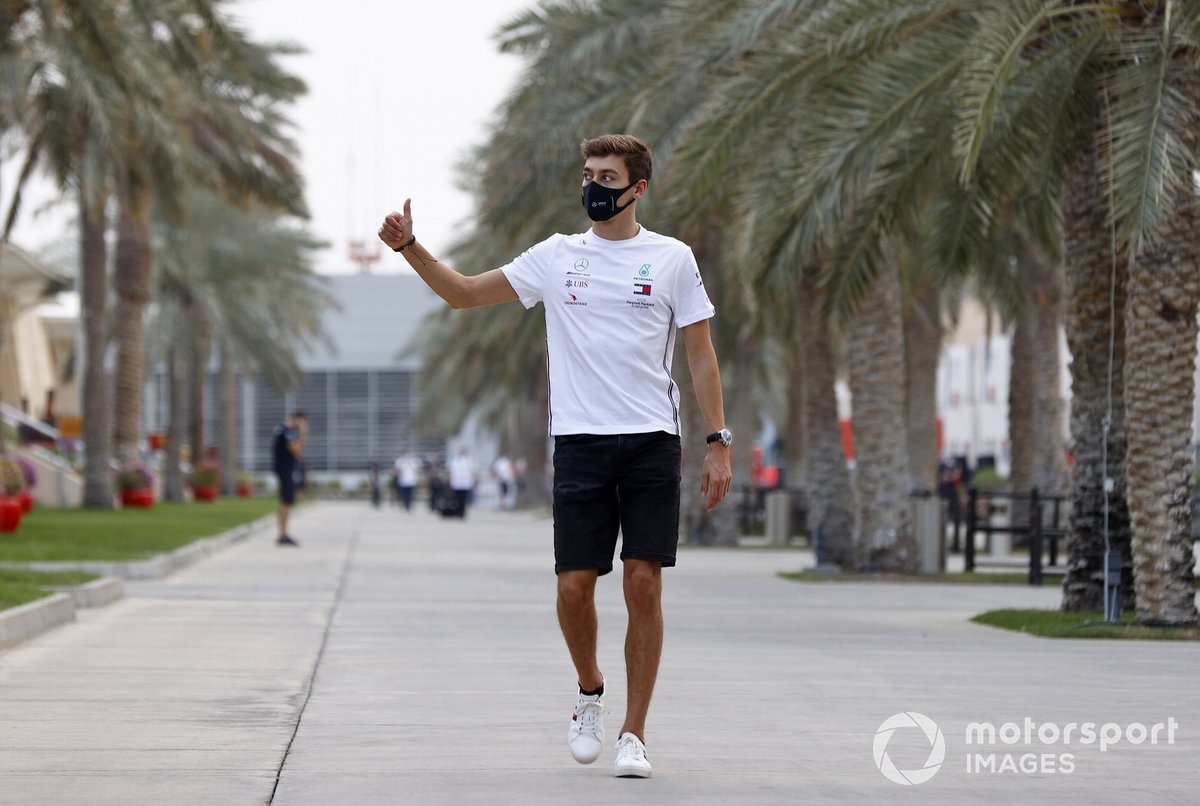 How it will work when F1 arrives

The area around the circuit and the adjacent hotels has been closed off, with entry for F1 personnel only allowed on Monday. After entry, nobody will be permitted to exit – if they wish to return – to what is being termed a ‘biosphere’ until after the test on the following Tuesday.

The only exceptions are vehicles and personnel with specially arranged government passes. The preparation process began in Bahrain, where all F1 entrants had to take a locally mandated COVID test at the airport on arrival. They then had to isolate in their hotels until they received a negative result via a government app on their phone.

Subsequent to their arrival, all F1 personnel have been tested every few days with the Bahrain government and FIA testing systems working together.

Arrivals in Abu Dhabi have had to spend at least a week in Bahrain under the COVID testing regime, so anyone who skipped the Bahrain GP – such as Ferrari boss Mattia Binotto – had to travel out for the second race in order to guarantee their presence at the season finale.

The only alternative option is a mandatory 48-hour quarantine for anyone travelling directly from Europe to Abu Dhabi. 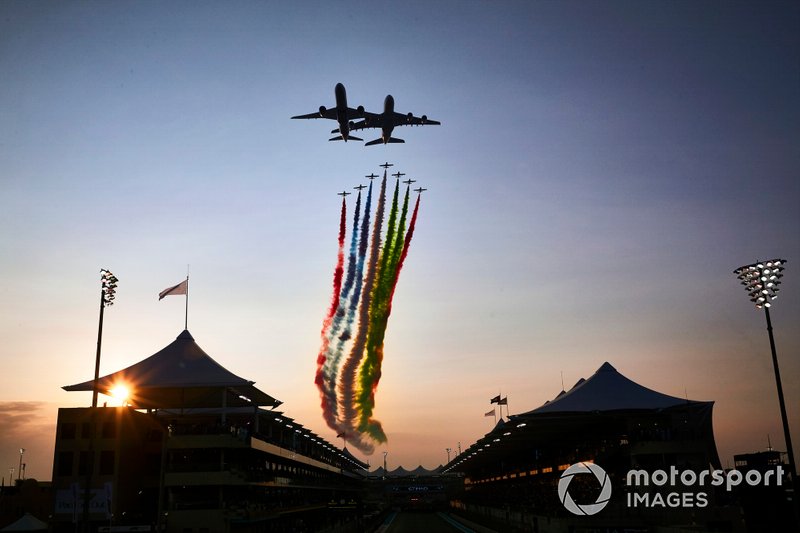 How the logistics were planned

F1’s travel division has worked with Abu Dhabi GP race sponsor Etihad to arrange 10 charter flights – nine Airbus A320/321s and a Boeing 787 – which will leave Bahrain every hour from 10am onwards, carrying a total of 1248 people. Social distancing rules mean that not every seat will be occupied, while teams and staff from different “bubbles” have been carefully split up.

While teams do sometimes use F1-organised charters, especially for complicated routes between back-to-back races, this is the first time that the entire paddock community – including drivers, teams, FIA, F1, and media – have all been obliged to travel on charters.

The only exceptions are those on private jets, but they also have to travel on Monday. Everyone has to have a paper copy of their most recent Bahrain negative test in order to be allowed to fly to Abu Dhabi.

A special section of Bahrain’s airport has been reserved for those checking in to the F1 flights, and the entire Terminal 3 in Abu Dhabi will be closed on Monday to deal with their arrival. Despite being in possession of a Bahrain negative test certificate all arrivals in Abu Dhabi still have to undergo another test on arrival at the airport. 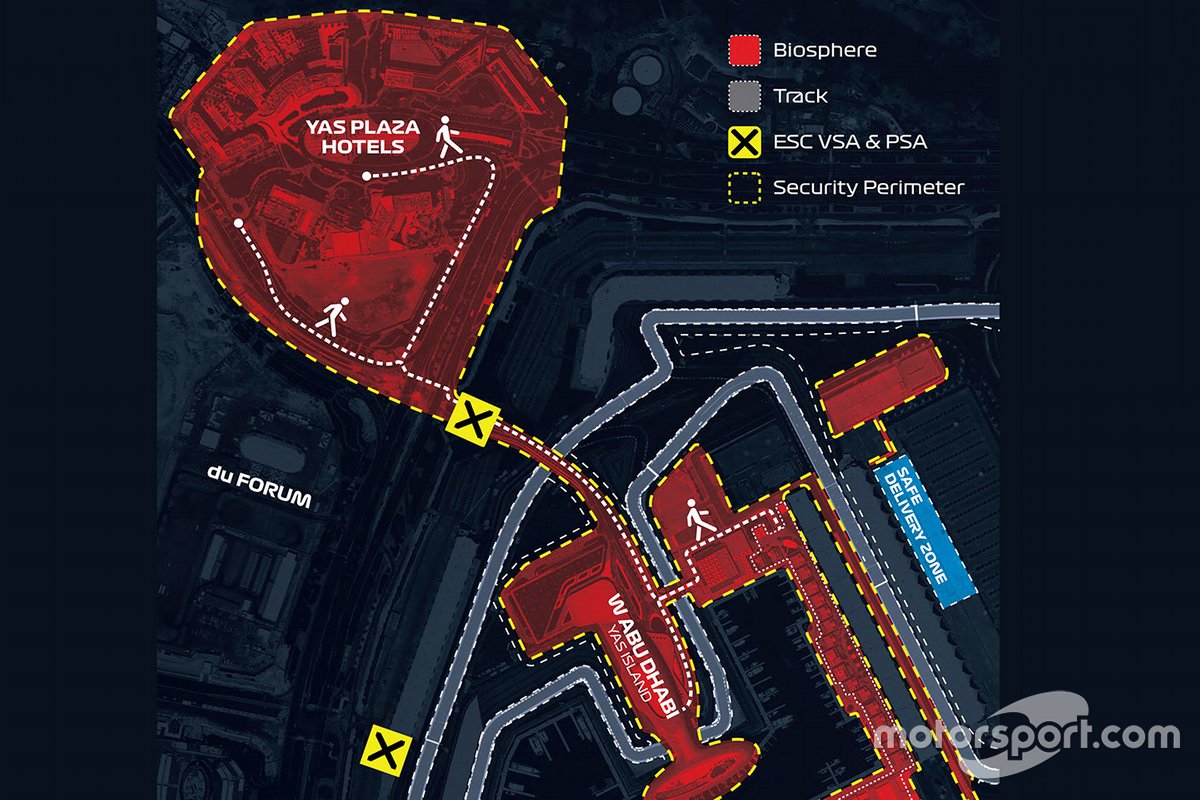 Personnel will be transferred to the hotels around the track, entering the ‘biosphere’ that they cannot leave until after the race. They then have to isolate in their rooms on Monday evening, while awaiting their test results. Six hotels will house the entire F1 circus, including the landmark whale-shaped W Hotel in the middle of the circuit.

A seventh has been reserved purely for the staff of the other hotels, as well as local circuit and event personnel, so they do not have to commute from their homes. They have had to quarantine at that hotel for 14 days prior to F1’s arrival.

Contrary to what many people assume, the W Hotel is not usually used by F1 regulars, despite its location just a few metres across a footbridge from the paddock. Its busy nightclubs and bars, plus the noise from late night yacht parties at the adjacent marina, mean that it’s usually reserved for sponsor guests and VIPs. However, this year it will be reserved for F1’s major players.

The other hotels across the street from the track are all grouped together in a single complex that will be completely closed off to the outside world. Personnel will walk from their hotels to the paddock via a specially sealed-off route. 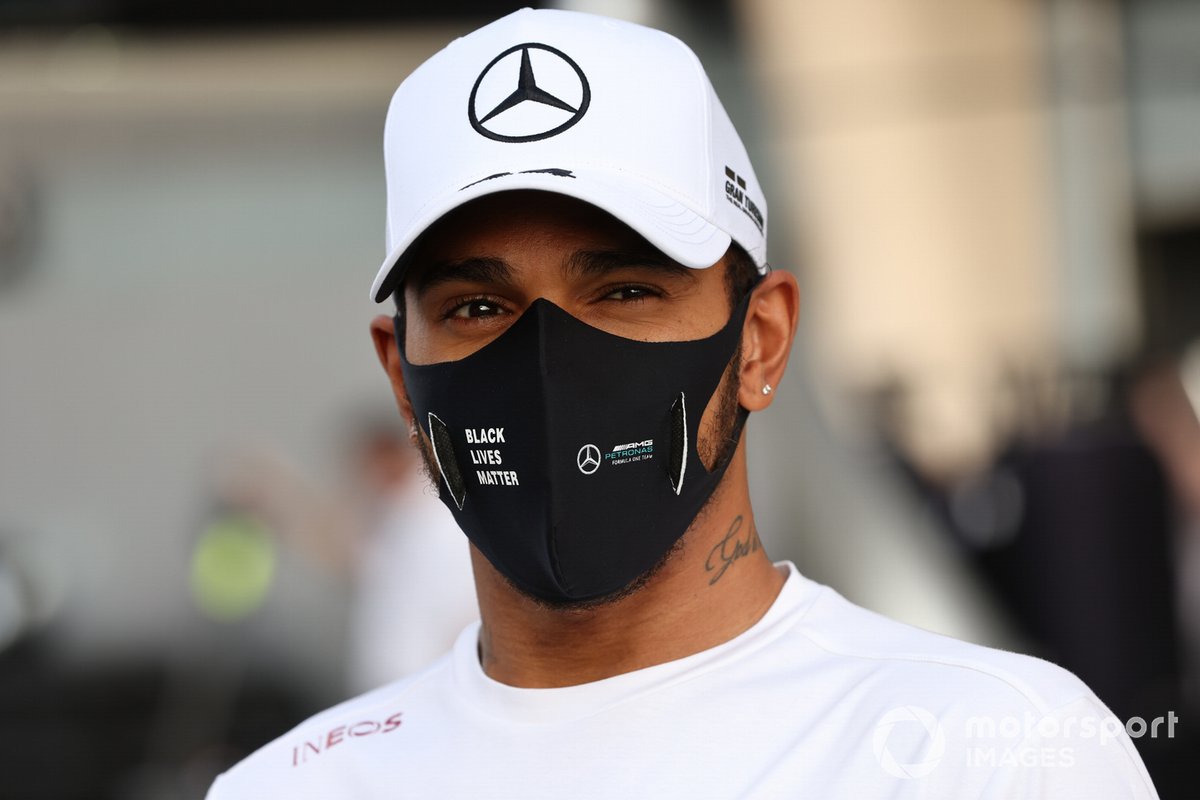 How Hamilton could be a special case

Hamilton’s situation is complicated, because he currently remains subject to Bahrain’s quarantine rules, and will also have to comply with Abu Dhabi’s entry restrictions.

It’s understood that if he did test negative this week, but misses the Monday travel window, with his private plane he will only be able to enter Abu Dhabi later in the week if the government makes a special exemption for him.

Bottas: "Very easy" to criticise my performance against Russell