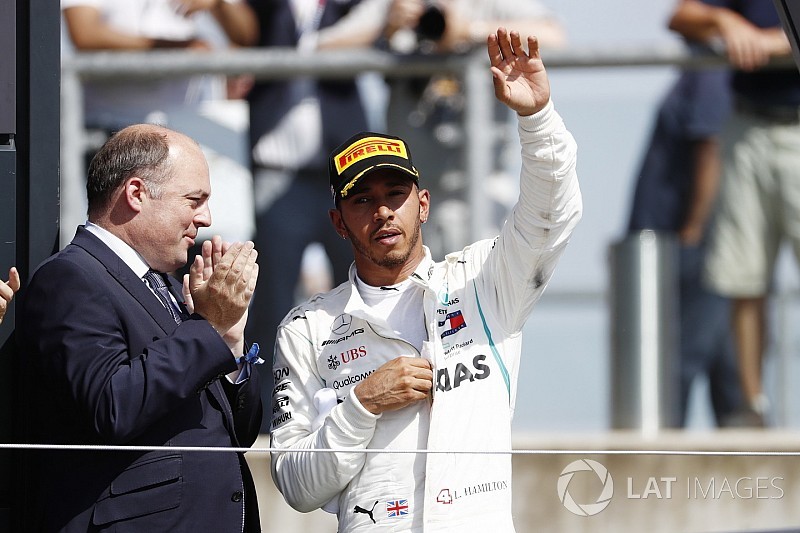 Lewis Hamilton has revealed he was "struggling to stand" after the British Grand Prix because he was exhausted from his fight back to second after a first-lap spin.

A bad start dropped Hamilton to third and he was then hit by the Ferrari of Kimi Raikkonen at Turn 3, the Mercedes driver dropping to 18th position.

Hamilton recovered to second, aided by Mercedes decision not to pit him for fresh tyres under a safety car to gain track position, but looked tense alongside Raikkonen while the top three waited to go onto the podium post-race.

Asked if it was because of the first-lap clash, Hamilton said: "Not at all. No.

"I gave every bit of energy I had, I didn't have anything left when I came in.

"People expect you to get out of the car and wave and smile and all that. I gave everything I could, I was struggling to stand. It's so physical nowadays.

"It's different when you're in the lead and can control the pace. I was coming from last.

"So, I didn't have much to give at that time and needed to take a deep breath. I don't have any problems with Kimi."

While Hamilton was left exhausted post-race his title rival and British GP winner Sebastian Vettel appeared to have a bigger physical scare on Saturday.

Vettel he admitted he feared he would miss qualifying with a neck complaint, and though he went on to earn second on the grid he confessed to still being a little worried going into the race.

However, Vettel ultimately required less headrest padding than in qualifying to manage the issue and ended up completing the GP without further concern.

"It felt good on the laps to the grid so I took some [padding] off," said Vettel.

"Qualifying wasn't very enjoyable, I did as little runs as possible and I had the padding just to support in the corners where I was resting my head yesterday.

"[In the race] it wasn't necessary, I had a good feeling and the race was no problem."