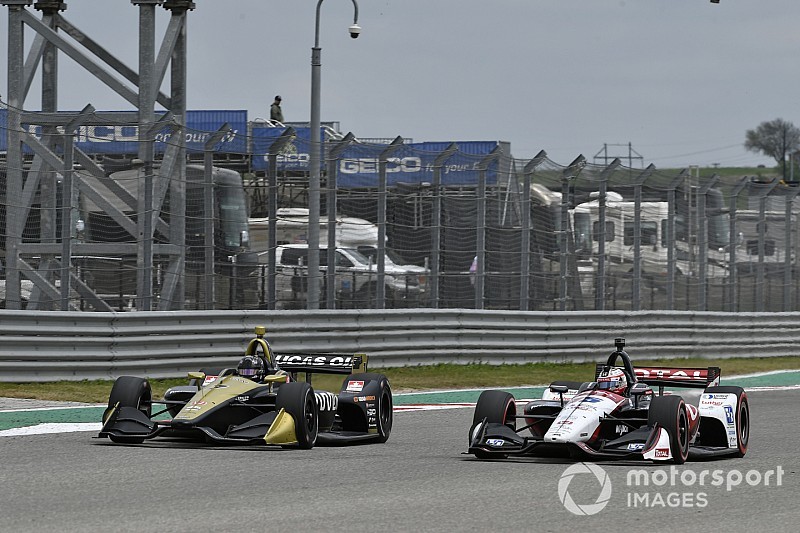 Marcus Ericsson says his IndyCar switch has highlighted the flaws of DRS-assisted racing, as he questioned the decision to increase the Formula 1 system’s use in this weekend’s Bahrain Grand Prix circuit.

The expansion of the drag reduction system at the track, announced in the lead-up to the grand prix, means that all three major straights of the Sakhir circuit will feature DRS in the race.

The new zone is located after the opening sequence of corners, and will in theory allow drivers to make another attempt at overtaking if they were unsuccessful in pulling off a move on the start-finish straight.

Ericsson, who competed in F1 full-time between 2015 and 2018 but currently combines a reserve role at the Alfa Romeo F1 team with a full-time Schmidt Peterson Motorsports drive in the IndyCar series, voiced his reservations over the Sakhir change on social media.

“Not sure about this,” he wrote on his Twitter page in response to the news story on Motorsport.com. “One of the great things I've found in IndyCar so far is the fact we don't have DRS [which] means there is so much more proper fights on track wheel-to-wheel and corner-to-corner.

“You don't 'wait' for a DRS zone to overtake, you just go for it when you get the chance.

“DRS might produce more overtaking, but is it really producing more proper fights on track - which I believe is what we want to see?

“Just my two cents. And I’m not saying I have the answer.

“I just know that from a driver perspective you have to be more aggressive and go for it more when you get the chance, anywhere on the track. Instead of waiting to get to a DRS zone and do the pass there the 'safe' way.”

Ericsson added that he was not convinced by the decision also because “a track like Bahrain already has good overtaking possibilities”.

The changes to F1 aero regulations for 2019 mean DRS is supposed to be more effective, as a result of a larger rear wing.

Ericsson said he preferred IndyCar's alternative to DRS – the push-to-pass system, in which drivers are allocated a certain amount of time in which they can benefit from an increased power output, which can be activated at any part of the circuit.

The Swede said he found himself using the system in battles, adding that it was “a good tool to get overtakes done in the exits when people had been defensive in corner entry”.

F1's aero tweaks for 2019, intended to boost overtaking, made their debut in the Australian Grand Prix, which likewise featured three DRS zones.

But impressions from Melbourne proved inconclusive, with Haas driver Romain Grosjean suggesting the new rules have made it easier to follow other cars, if not overtake them.

Five things to look out for in the Bahrain Grand Prix