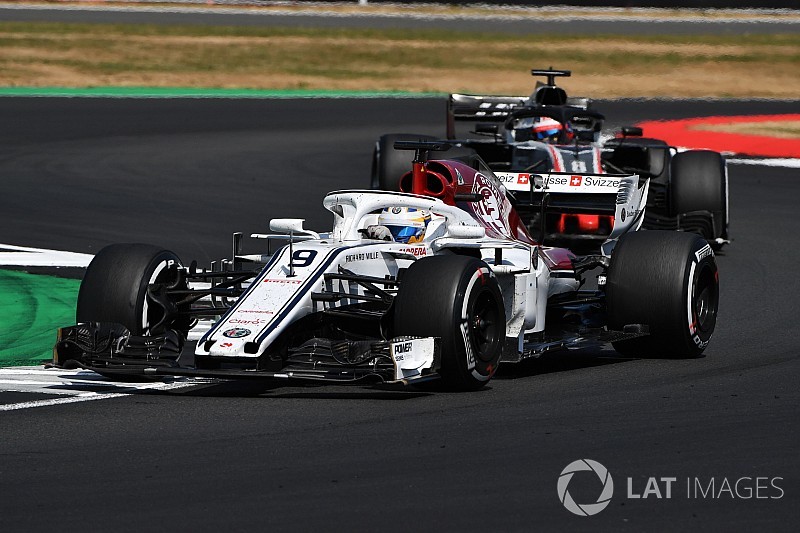 Marcus Ericsson has admitted his failure to close his Sauber Formula 1 car's DRS in time was the cause of his big crash in the British Grand Prix.

The Swedish driver was running 14th and challenging the Force India of Sergio Perez when he went off into the barriers at the start of the 32nd lap at high speed at the Abbey right-hander.

Ericsson had his DRS engaged at the time, with a third zone having been added at this year's Silverstone race covering the start/finish straight and the first two corners, Abbey and Farm.

Although at first Ericsson believed there had been a problem with the system, he revealed that subsequent analysis by Sauber showed that he in fact didn't hit the button to manually disengage it.

"I wasn't sure after the incident if it was a failure or not, but we've looked at the data and it seems like... I have the button behind my steering wheel and it's quite bumpy on entry and you go on the kerb, and I think I slipped and didn't hit it.

"Basically I turned in with the DRS open and then you're a passenger as the car just turns, that was the reason why it happened."

Ericsson was convinced the incident cost him a chance to finish in the top 10.

"I think points were on the cards," he said. "At that point I was just behind Checo and Pierre [Gasly] was right ahead. I felt at that point really strong and had fresher tyres than both of them."

Charles Leclerc's race ended when Sauber sent the Monegasque out of the pits with a loose wheel and ordered him to stop the car - costing him the chance to fight with Renault's Nico Hulkenberg for sixth place.

"It was a very good race until that pitstop," said Leclerc. "It's a shame because we were fighting for P6, at the end Nico finished P6 and the undercut was working very well.

"The pitstop was good again, and we would have gained quite a lot on new tyres. I was quite close to him that lap we pitted, so I think we could have been in front."

Sauber boss Frederic Vasseur said he would take away the positives of being able to challenge Renault rather than dwell on the loss of a potential major points haul.

"It’s a shame because the pace was there, the start was good," Vasseur told Motorsport.com. "But I think we have to keep in mind the positive side of the weekend, that we are improving.

"The pace was there in qualifying, and even in the first 20 laps when we were fighting with Renault. I think it’s a good improvement.

"Now we have to turn the page and focus on the next one. We’ll have an update for Hockenheim. We are improving step-by-step.”