Join us as we delve into the latest technical developments on display at the Eifel Grand Prix at the Nurburgring, courtesy of Giorgio Piola and Motorsport Images. 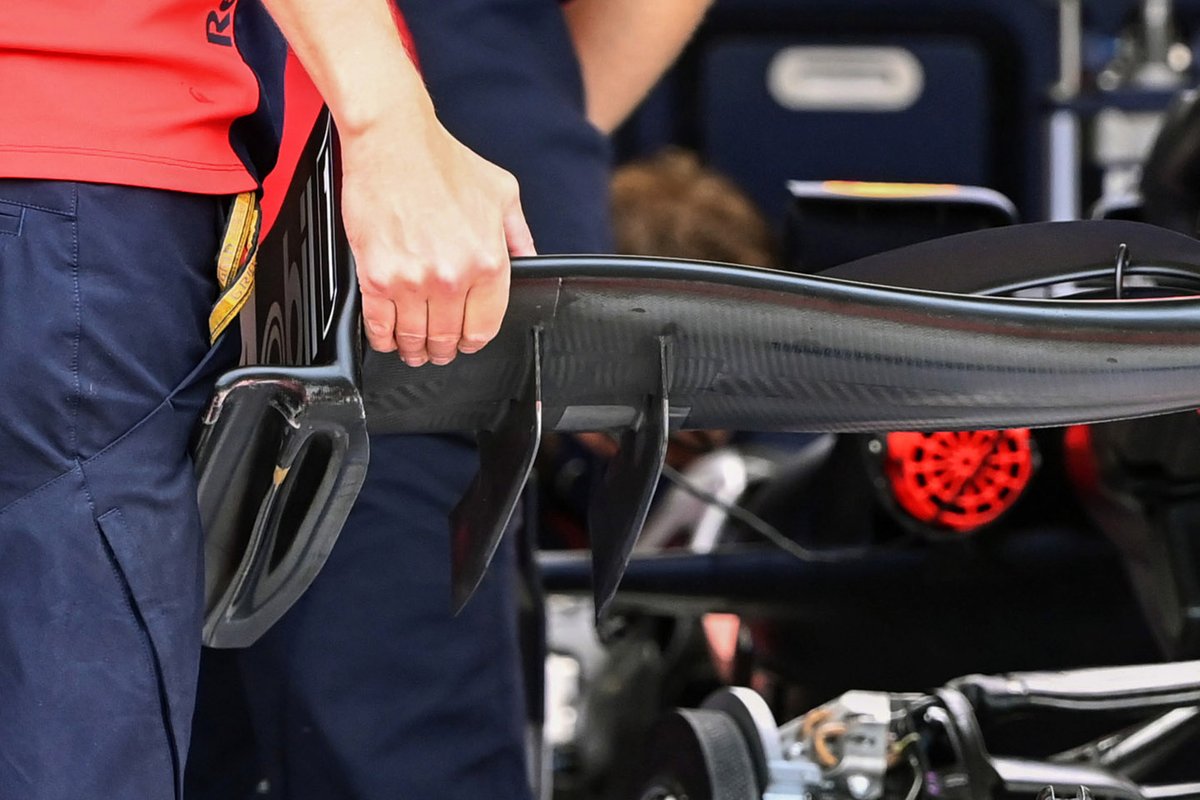 1/17
A view here that we don’t get too often, the underside of the front wing and in this case the Red Bull RB16. What’s extremely interesting is the treatment of the floor of the footplate, which has been opened up to create a pocket of negative space. It’s interesting to imagine what kind of effect this might have on the pressure field in this region too. 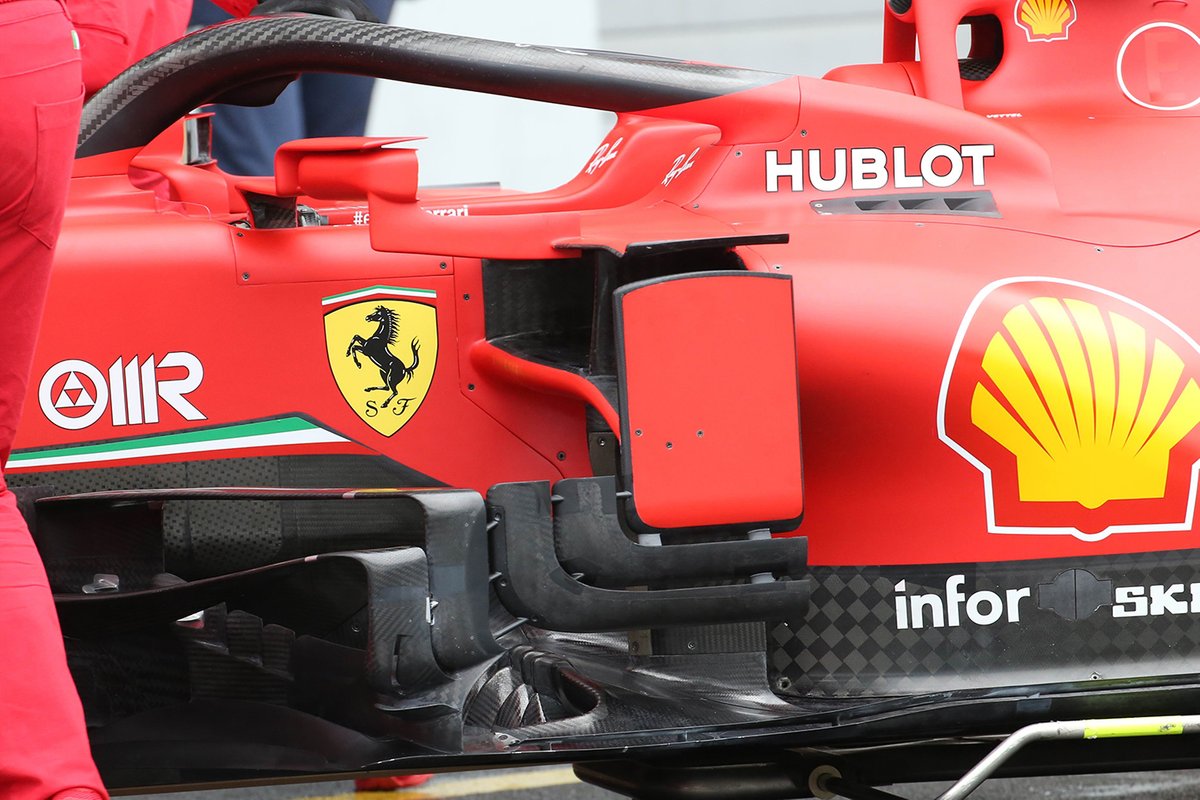 2/17
Ferrari arrived in Germany with parts that build upon the foundations that were laid by the updates introduced in Russia. This includes a new sidepod deflector array which has two distinct vertical elements that merge with the boomerang winglets, rather than a conjoined element (blue and green arrows), whilst the first of the L-shaped panels has also been modified, along with all the supports that bind these surfaces. 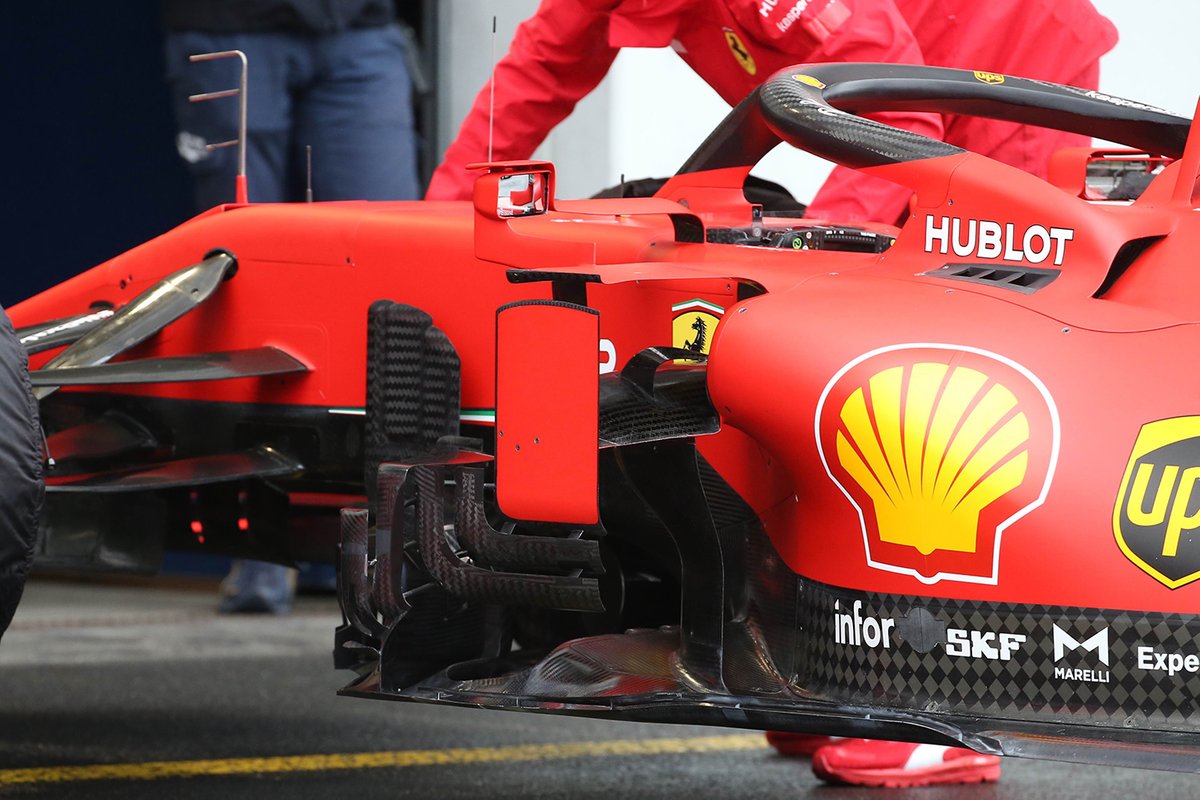 3/17
Another angle of the new sidepod deflectors on the SF1000 along with a good view of the ramp that’s created on the leading edge of the floor to enable more airflow to get to the underside of the floor. 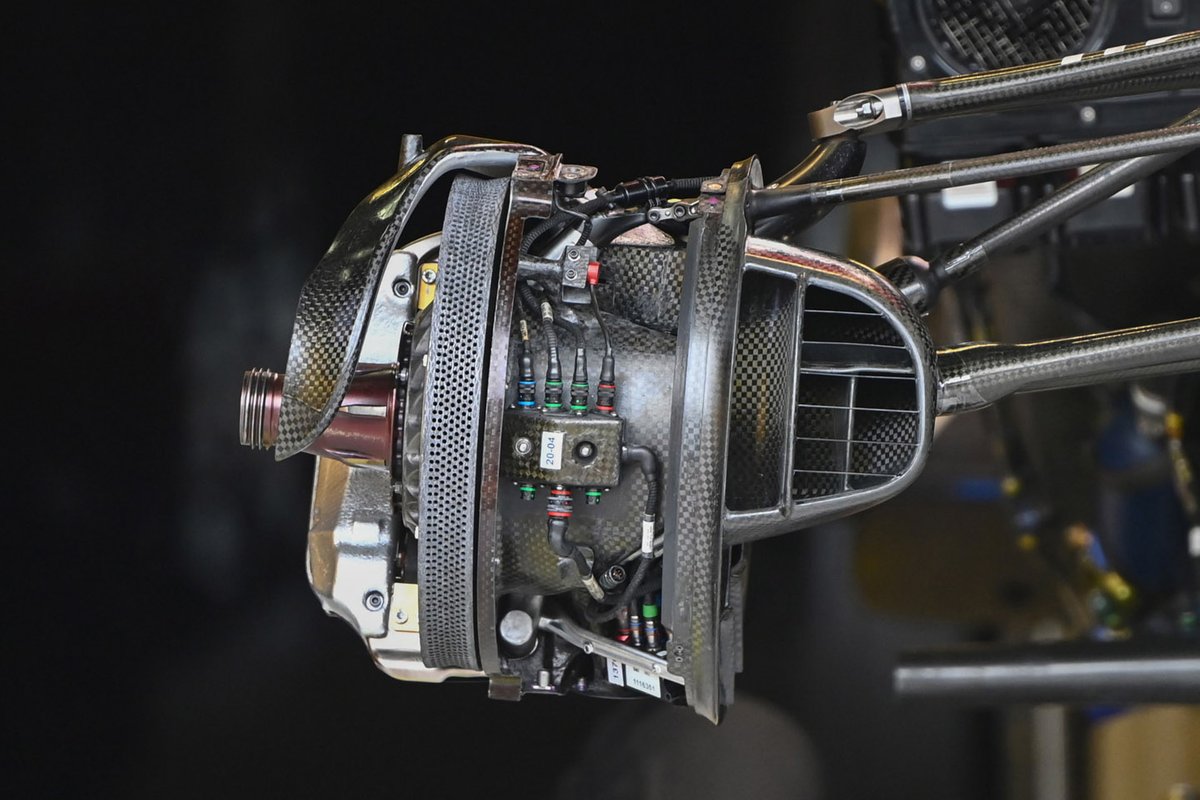 4/17
A close up of the Renault RS20’s front brake assembly, note how the team has added a bypass pipe that carries airflow captured by the inlet and emits it straight out of the wheel rim, altering the shape of the wake created by the entire assembly as a consequence. This development mirrors the solution that we’ve seen Mercedes use for some time now. 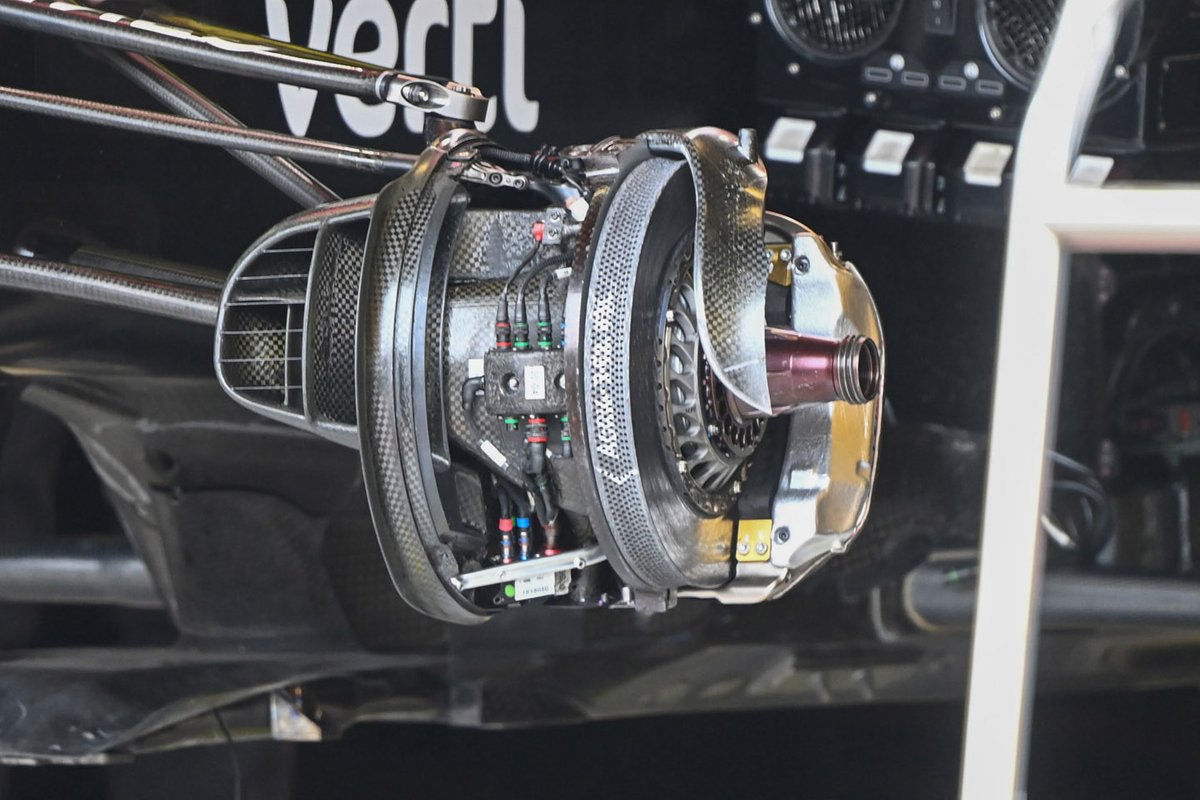 5/17
A different angle of the bypass pipe installed as part of the RS20’s front brake assembly shows how the pipe must be contorted to provide sufficient airflow within the space that’s left over when everything else is installed. 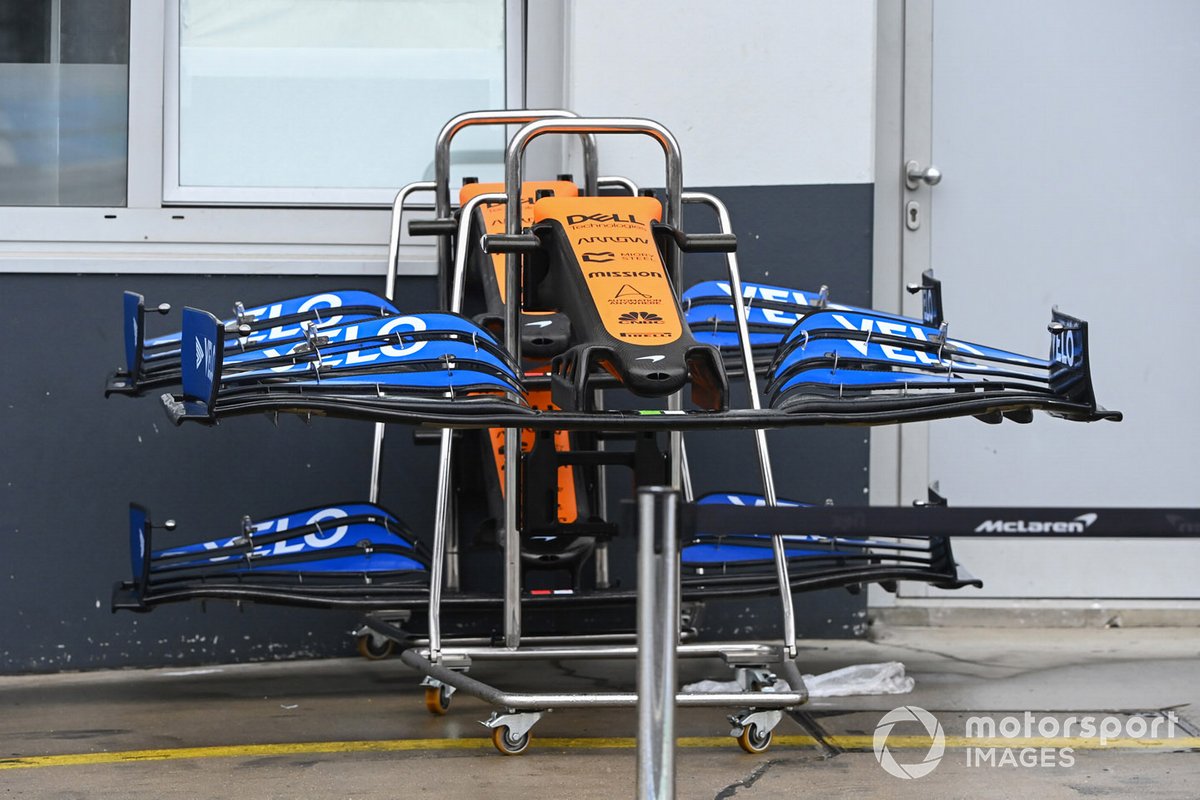 6/17
A selection of front wings and noses outside the McLaren garage, note the new nose design on the bottom of the rack at the back. 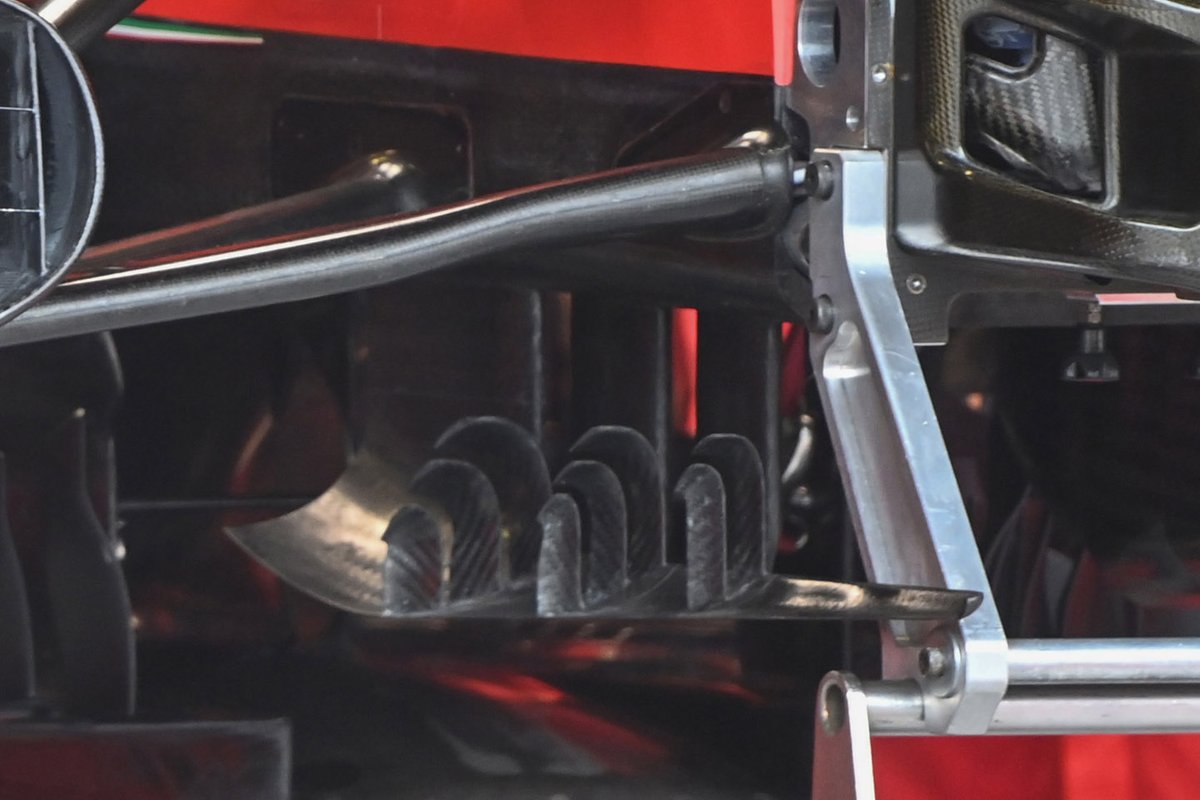 7/17
Added as part of the update that Ferrari ran in Russia, this series of arched fins mounted on the turning vanes footplate provide directions for the airflow that might not otherwise find its intended destination. 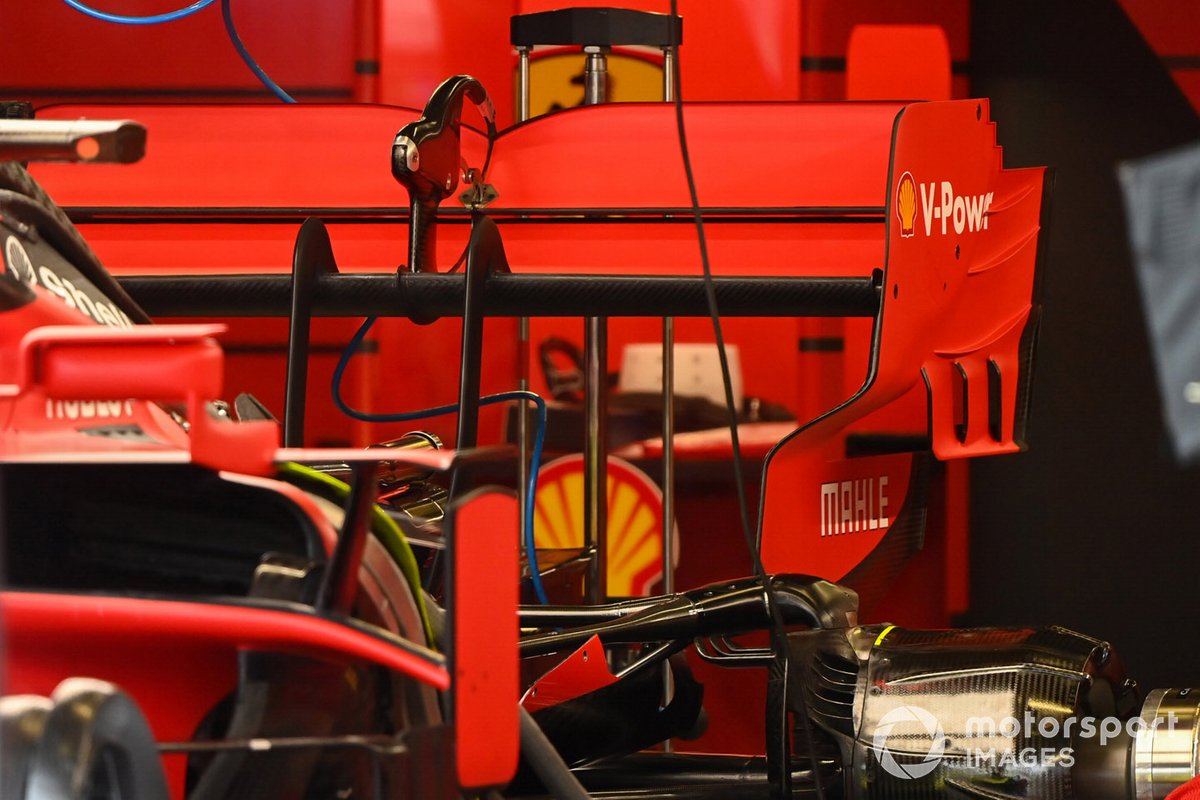 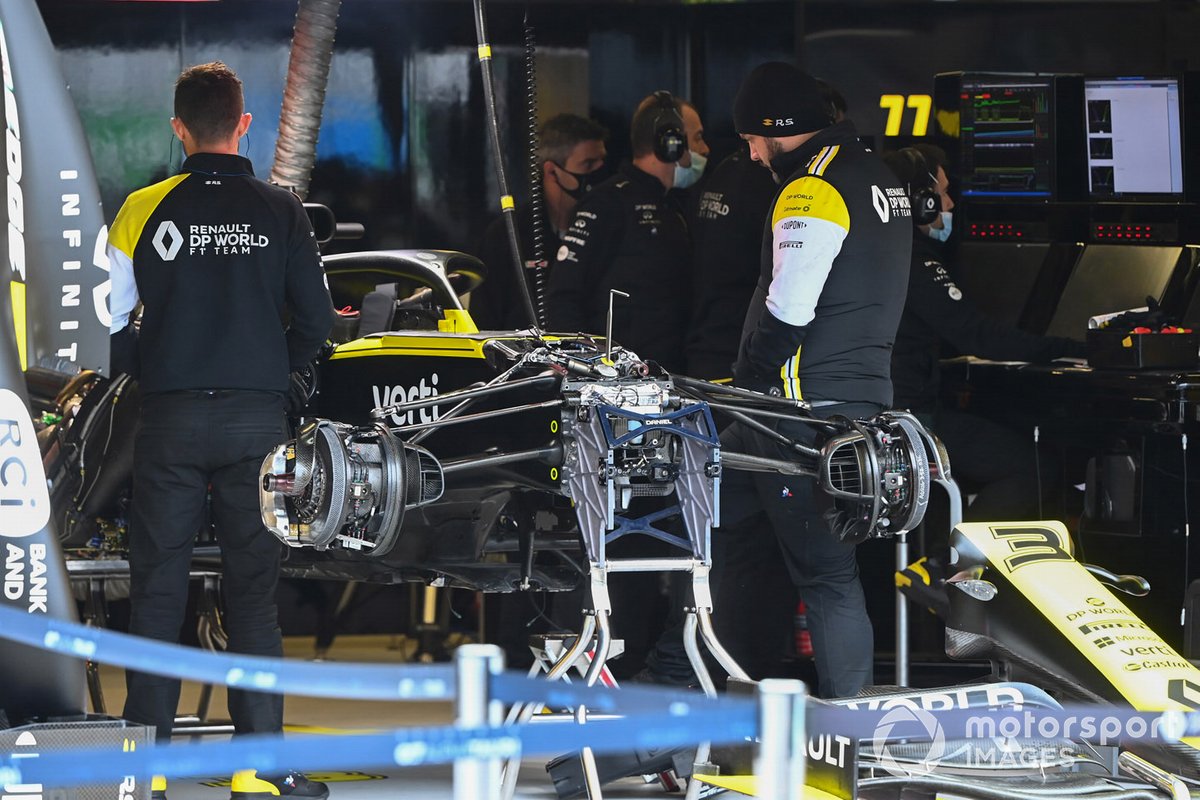 9/17
The Renault RS 20 of Daniel Ricciardo is prepared for action by his mechanics, exposing details such as the front brakes, suspension and the splitter stay. 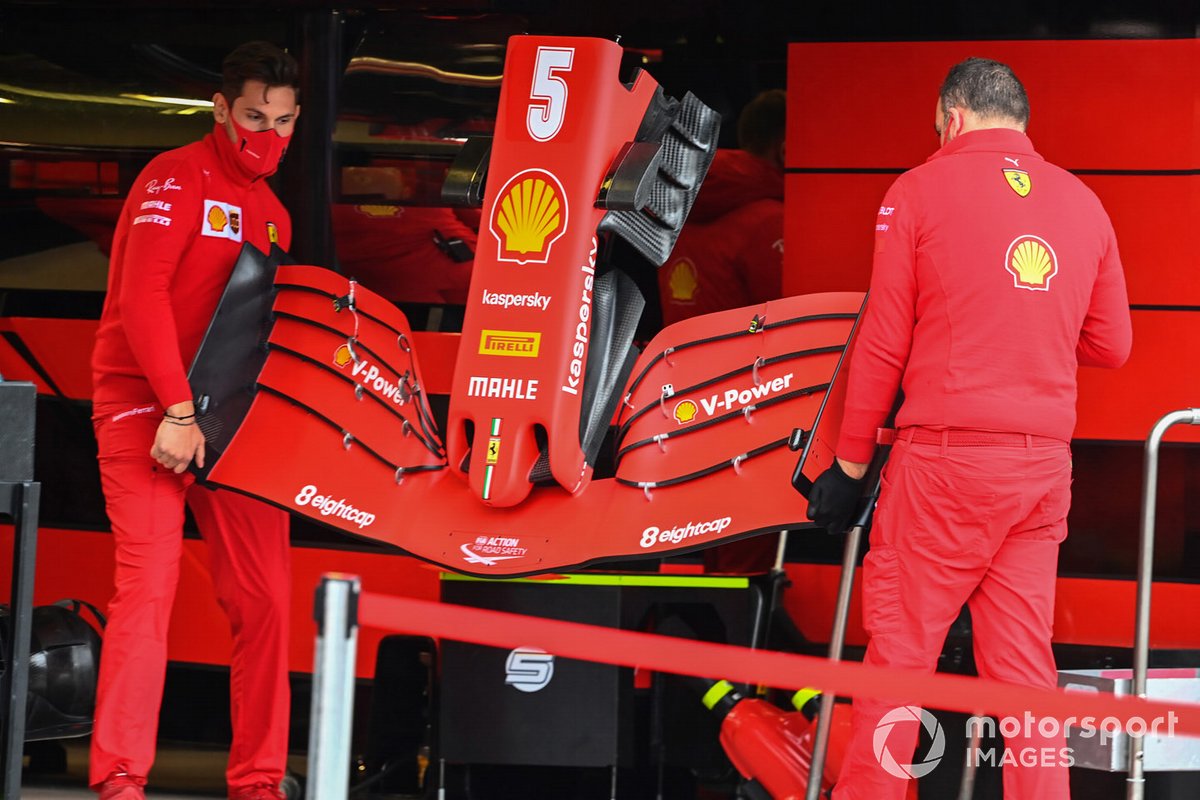 10/17
Ferrari mechanics hold aloft a front wing and nosecone from the Ferrari SF1000 both of which were modified at the last Grand Prix in Russia. 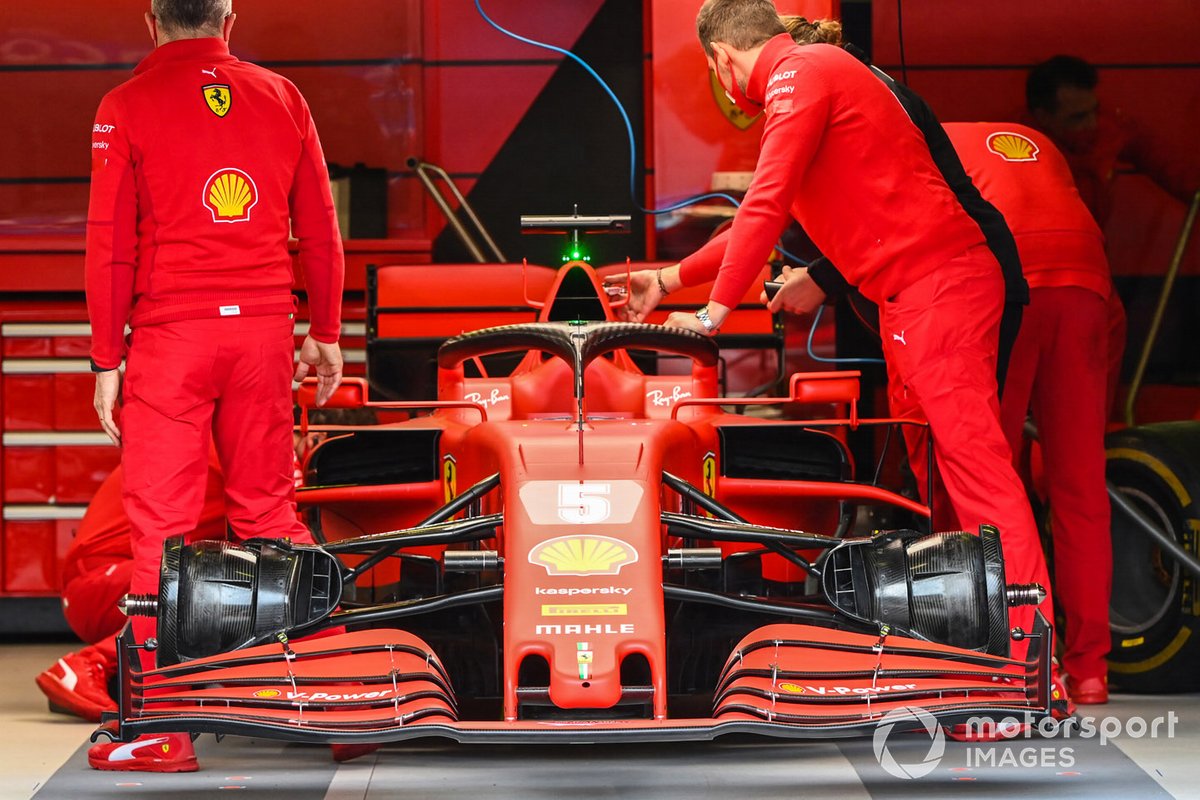 11/17
A good overall shot of the SF1000 from the front and with the front wing and nose now installed.

A Renault mechanic with a front wing 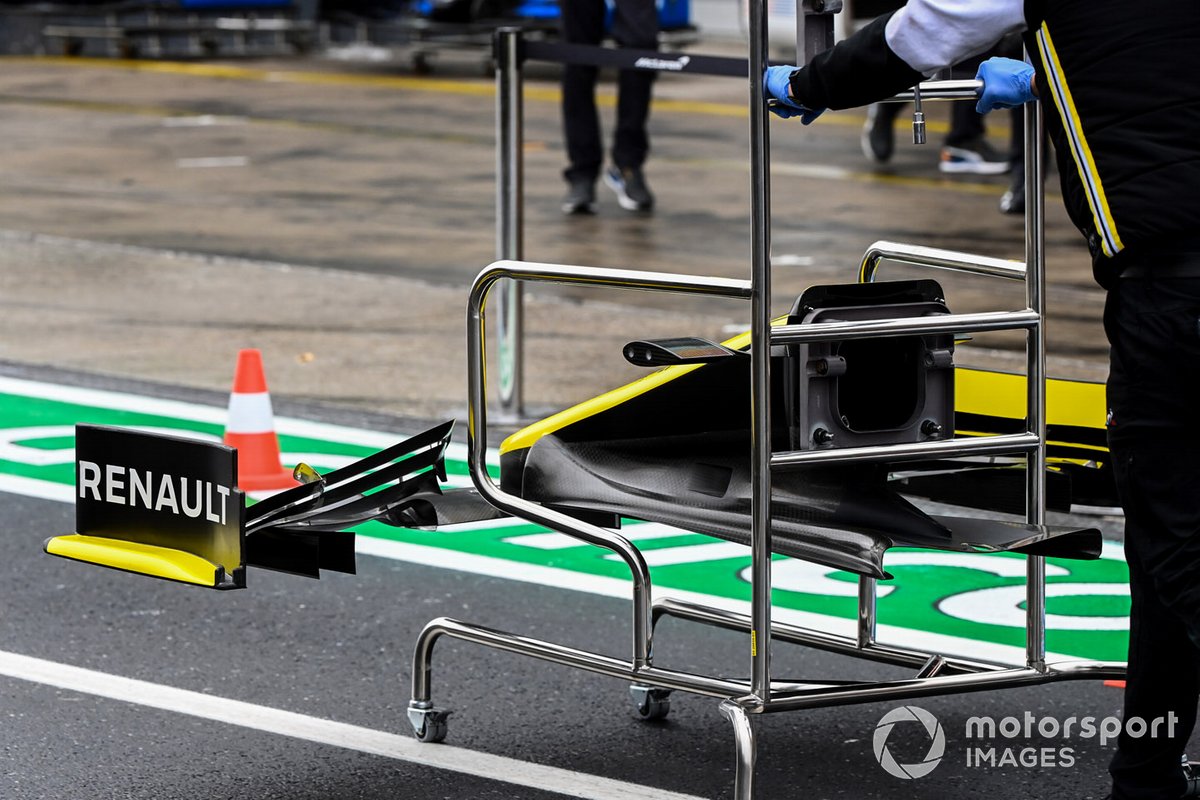 12/17
A Renault mechanic wheels a front wing and nose through the pitlane and gives a great view of the assembly from behind, also noting the design of the cape 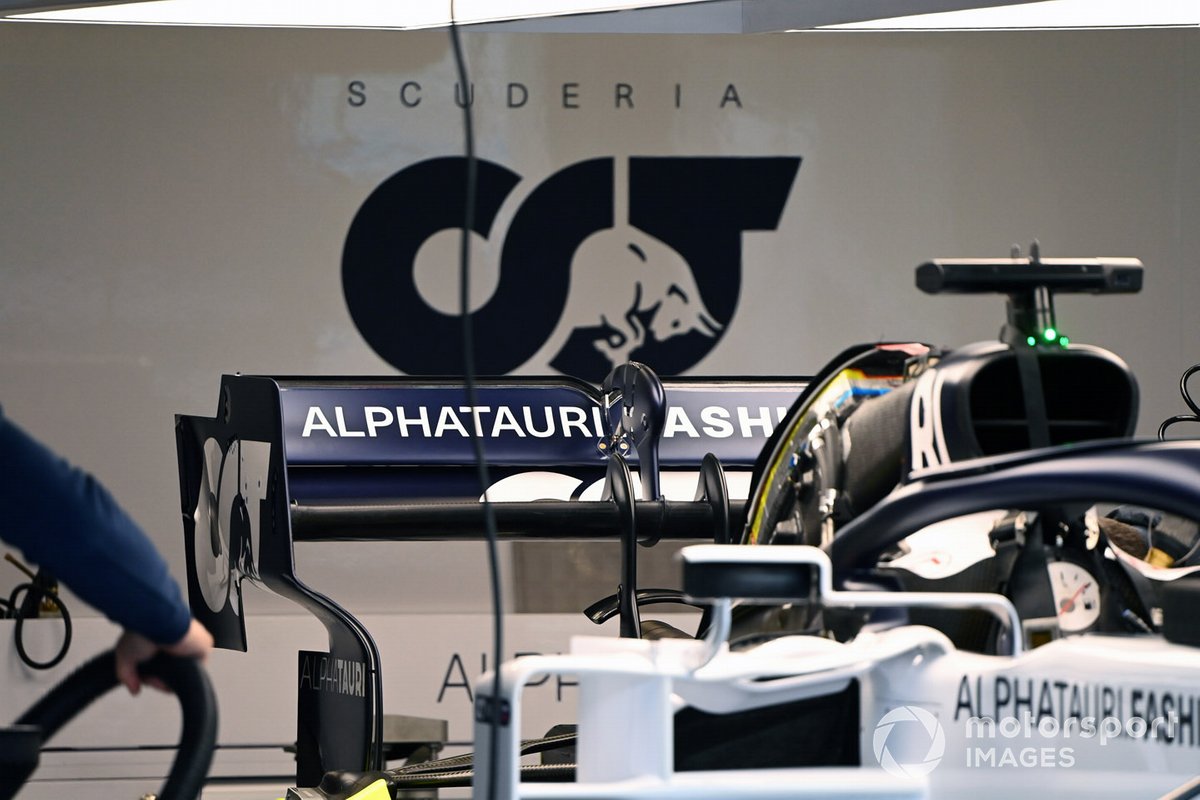 13/17
A look at the AlphaTauri rear wing as the car is prepared for action but also note the use of a curved monkey seat winglet over the top of the exhaust, as it looks to add a little influence to the plume’s direction. 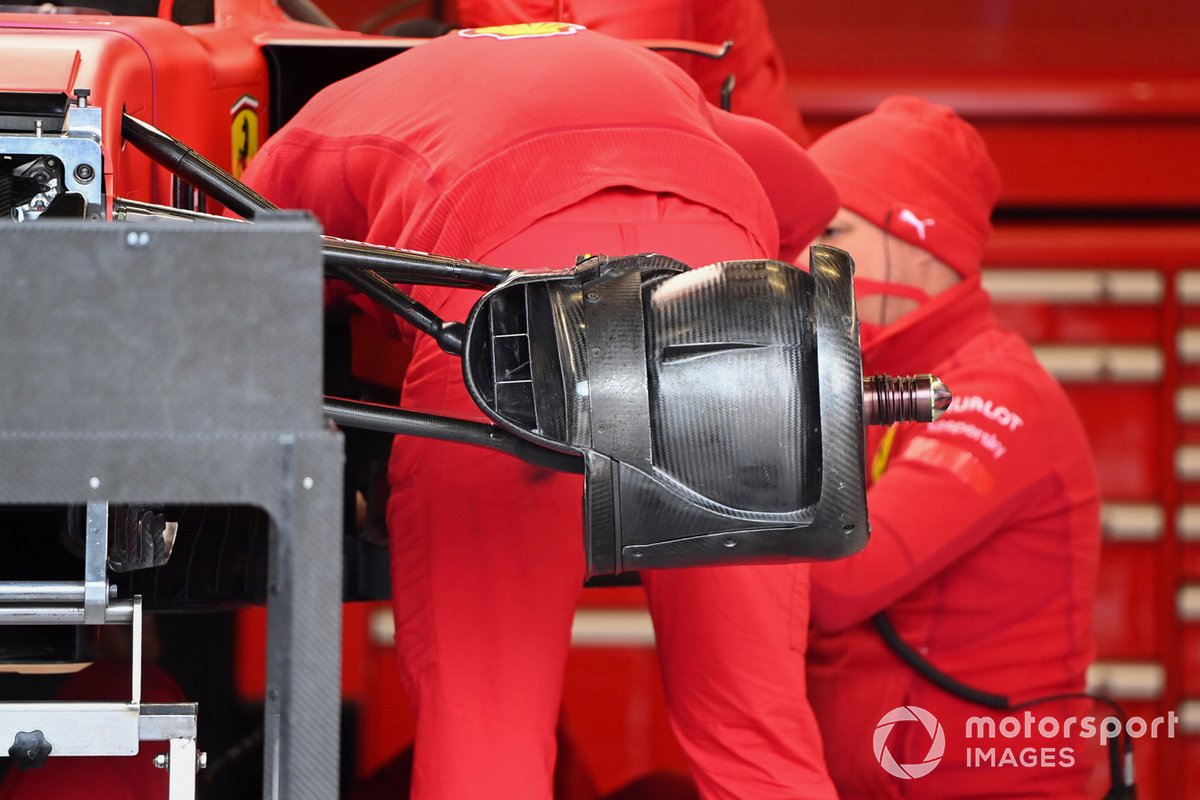 14/17
Ferrari’s front brake duct assembly, note its use of the triangular guide vane in the middle of the trough. 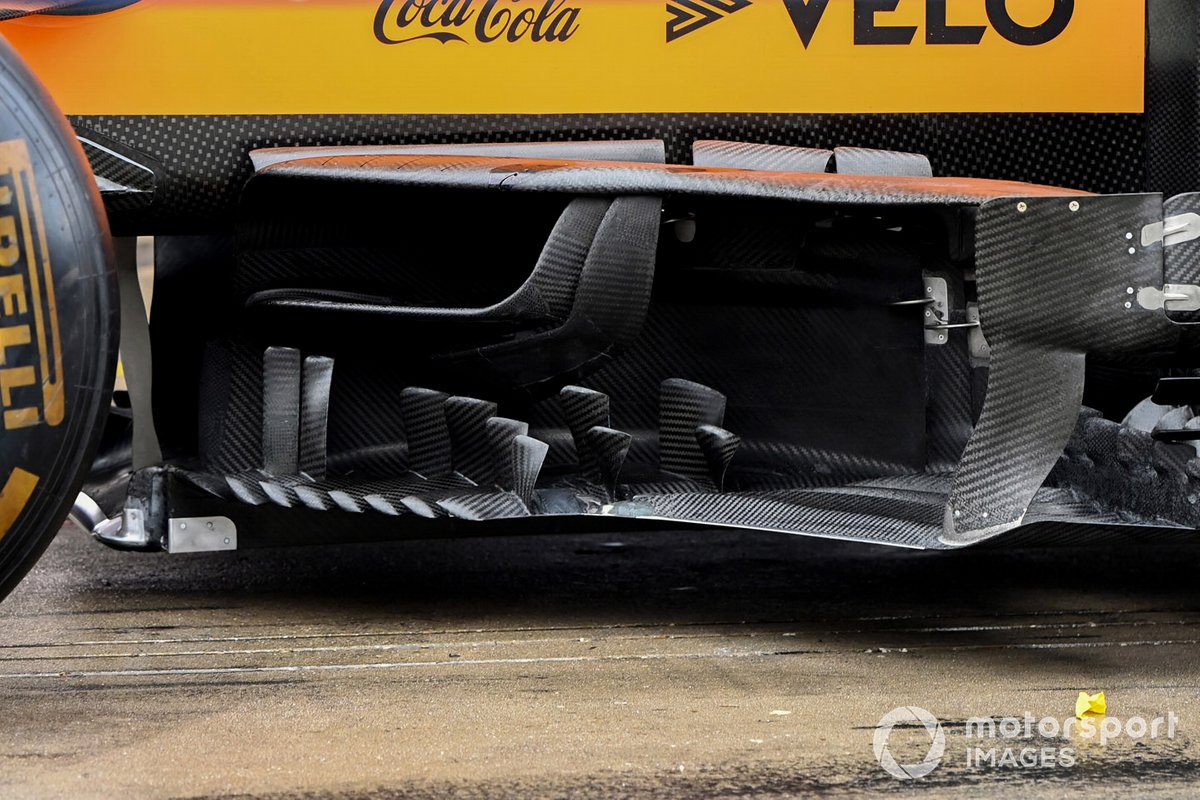 15/17
A close up of the new bargeboard arrangement introduced by McLaren a few races ago, which features the two dog-leg shaped wings that connect the main bargeboard to the underside of the boomerang. Meanwhile, the serrated footplate and fins mounted atop were also optimised to improve flow downstream.

Haas VF-20 in the garage 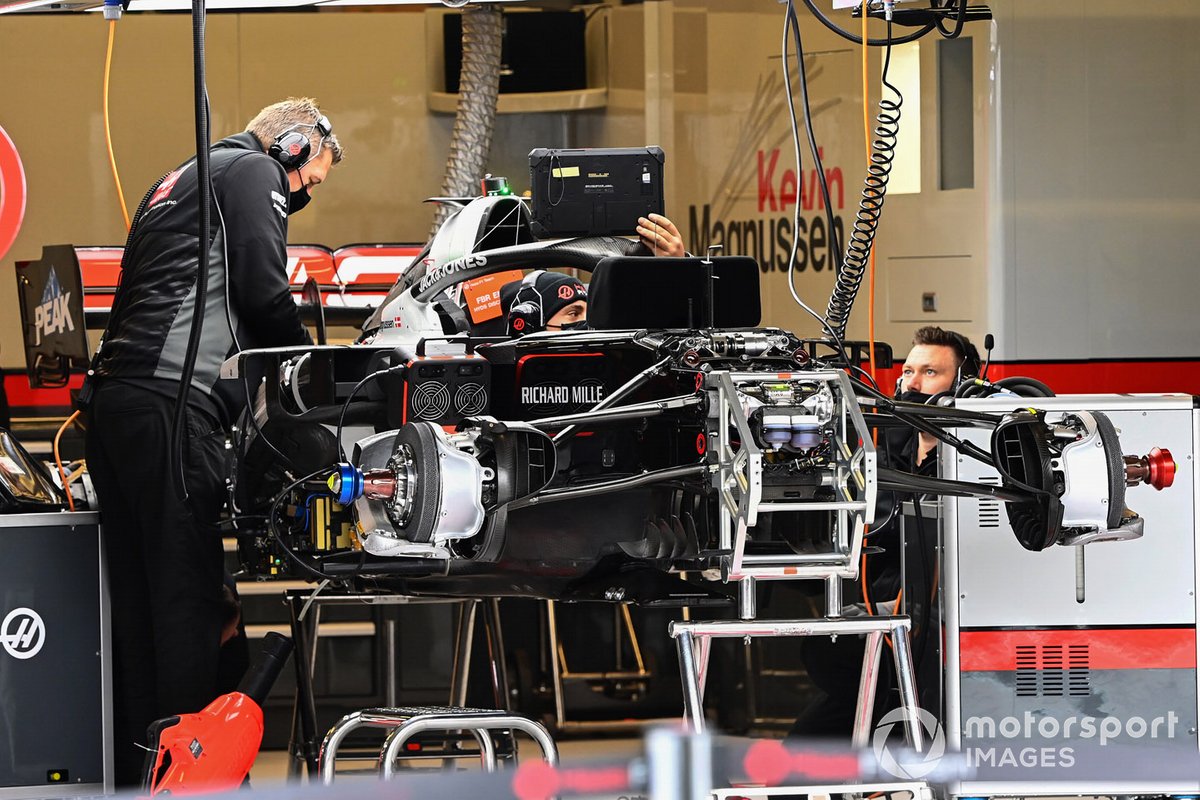 16/17
Mechanics work on the Haas VF20 to prepare it for tomorrow's action but note the fins mounted on the turning vanes, a design used since last season but adopted by Ferrari at the last race. 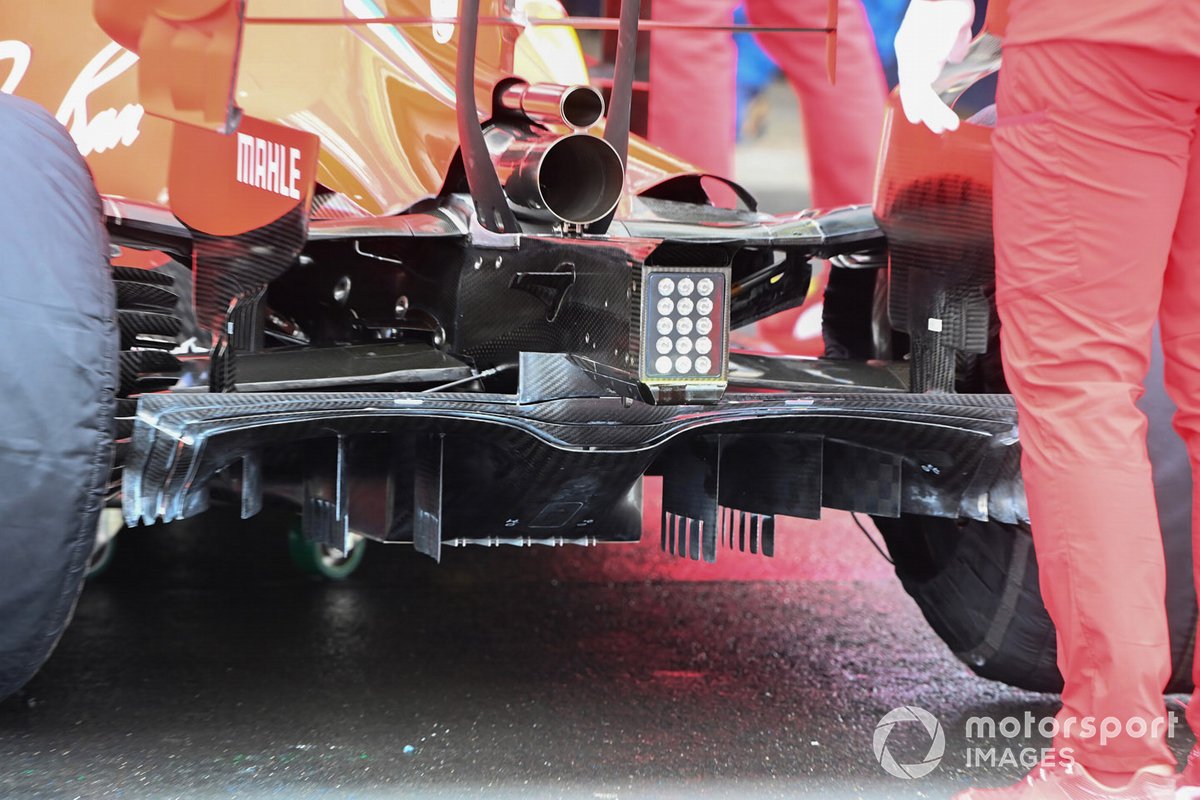 17/17
A rear end shot of the Ferrari SF1000, showing off the detail in the diffuser and the level of cooling that the team are expecting to run at the rear this weekend.

Vettel acquires shares in Aston Martin ahead of 2021 move

Formula 1 is braced for what could be a critical test of its long-term future on Wednesday, amid concerns a wrong step could signal "game over" for the cost cap.