May 22 (GMM) A British politician has alleged Bernie Ecclestone offered money in exchange for his former F1 ally Max Mosley becoming a member of parliament.

David Davis, a conservative backbencher and former party chairman, said the F1 chief executive's offer was made a decade ago ahead of the 2005 election, according to the Daily Mail newspaper.

Ecclestone's offer of money in exchange for a safe conservative seat for Mosley was reportedly made to Davis by Sir Alan Curtis, the former chairman of Lotus Cars. 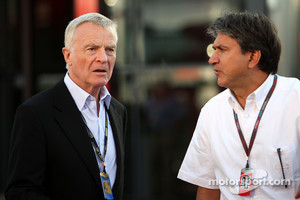 "He (Curtis) said Mr Ecclestone wanted to help Mr Mosley obtain a safe conservative seat and that if we delivered, we could expect a serious contribution from Mr Ecclestone," Davis said.

"I told him, 'We simply don't do that sort of thing'. After that, I heard nothing from him."

Former FIA president Mosley said: "It's a lovely idea but it's got no connection with the truth as far as I am concerned."

Curtis, however, confirmed meetings took place "but I can't believe I said he (Ecclestone) would (financially) support the party".

Ecclestone also confirmed the meetings, but as for the offer of money, the 81-year-old insisted: "I don't imagine that is what happened.

"We don't know Mr Davis is saying the truth do we?"

Maldonado could win in Monaco - report

What's the secret to winning the Monaco Grand Prix?