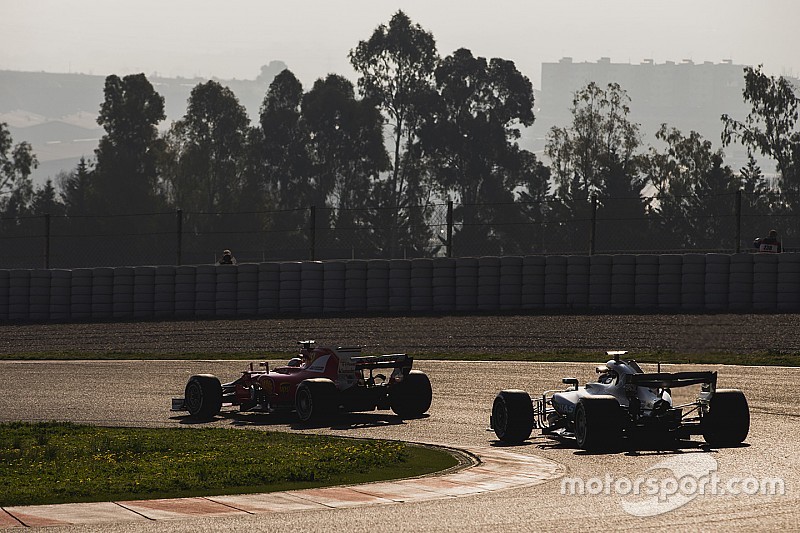 Fears that Formula 1’s new aerodynamic package will make overtaking harder in 2017 were borne out on the opening day of pre-season testing, as drivers found it harder to follow the car ahead.

Higher overall downforce levels make it harder for a following car to keep up in fast corners, because it loses front grip in the wake of the car ahead.

After the first full group F1 test today, Lewis Hamilton and Felipe Massa admitted that it will be an ongoing issue this year.

Overtaking was not part of the brief from the FIA when the new rules were formulated, with the focus on making cars faster and more challenging to drivers.

“So most likely we're going to be doing a lot more one-stopper [races] and, since there's not degradation, less mistakes, less overtaking.

“That's my prediction, I might be wrong, we'll find out.”

Massa: “Much nicer for drivers”

Massa said he enjoyed driving the new Williams FW40 today, but he too cautioned about what the racing will be like.

“Definitely from the driving point of view, it’s much nicer for the driver,” said the Brazilian. “For the show, I don’t know.

“I’m sure it will be more difficult to overtake. Today driving behind cars you lose a lot more downforce, the car is also much bigger.

“We’ll see, but I think it will be more difficult to overtake.”

Ricciardo: Today was a “tease”

Red Bull driver Daniel Ricciardo suggested the performance of the 2017 car had not yet wowed him in the way the rules revamp had intended.

Asked if the increased speeds from the wider tyres and improved aerodynamics had surprised him, Ricciardo paused and then replied: “Not yet. I think there is still a lot more to come from the cars, sure, and it is cold.

“The track feels like it is cold and the tyres are still not in their optimum temperature, but already you see the times – Lewis was already quicker than the qualifying here last year, so sure it will be faster.

“It is cool, but I think we will get a lot quicker from where we are now.”

He admitted teams were “just kind of scratching the surface” with performance on day one.

“You feel the difference in the high speed corners but I think we can still get a lot more out of the car,” Ricciardo added.

“The balance is still not where I think it can be, and the track is still really cold, so I feel the tyres are not at their peak and the car certainly isn’t yet.

“Today is a little bit of a tease – we feel a bit of it but there is a lot more to come.”

Photo comparison: All the F1 2017 contenders