Zoom is a unique concept that has never been done before in F1 or in any other sport. It brings new insight into the world of F1 through a collection of photographs taken by celebrated names from the sport. The drivers and team principals of every F1 team were asked to take a photograph of their chosen subject – the incredible range of images received demonstrates the extraordinary personalities and passions unique to F1. 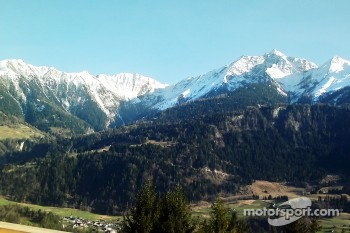 The collection includes over 50 images covering subjects from both motor racing and the participants’ personal lives. Highlights of the collection include Lewis Hamilton's 'driver's eye' view from the cockpit of his car at the pits at Spa-Francorchamps, Sebastian Vettel's favourite Alpine scene and Bruno Senna's beach paradise.

Every image has been signed by the contributor and will be auctioned off by renowned motorsport auction specialists, Coys ( www.coys.co.uk). Proceeds go to Great Ormond Street Hospital Children's Charity (GOSHCC), the official charity of the British Grand Prix.

Details of how to bid will be revealed nearer the time and will culminate on Friday 14th September 2012 at a VIP reception and live auction, attended by some of the F1 contributors themselves. The auction will take place in the ballroom of the Wyndham Grand London Chelsea Harbour which is the capital's only five-star, luxury all-suite hotel. Its location on the edge of elegant Chelsea Harbour makes it one of the most exclusive and secluded hotels in London. The hotel's 158 suites, including four stunning penthouses, enjoy sweeping views of London's skyline and it also has a tranquil terrace, harbour-side brasserie and luxury spa. Its ballroom has the benefit of natural light with huge windows looking on to the sparkling waters of the harbour.

Bernie Ecclestone, Formula One Group Chief Executive, said: "The auction is a super idea. It will hopefully raise a lot of money for the hospital and the teams will get coverage."

Chris Routledge, Managing Director of Coys, said: "This is a unique concept that has never been seen before in the field of sport and we expect the value of the photographs will reflect that."

Antonia Dalmahoy, Director of Corporate Partnerships at Great Ormond Street Hospital Children's Charity, said: "We are delighted to be the chosen beneficiary of the Zoom auction and would like to thank everyone who has taken a photograph. The images give real insight into the drivers' personalities and we're really looking forward to the auction."

Peter Sauber comments on his photo: "This is one of my favourite views in the world. I took this photo from the living room of my weekend cottage in Switzerland, which is located in the Kanton Grabünden (which is also known as Canton Grisons). The mountains are called the Signina group."

Kovalainen could have chosen 'middle team' over Caterham